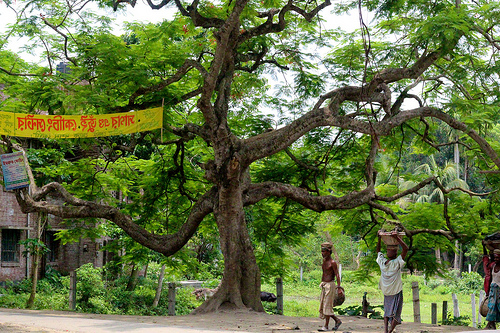 When peasants loot fields through the lotus dusk,
when children collect hailstones on the hush grass,

when ancient trees uproot, reed-roofed houses are blown away
by a wind stronger than Kaytoki’s storm-hair,

Bangladesh, the plentiful and destructible, I think of you.

Consider this burden of your famous floods
which hold water-lilies in your bosom year round.

Bangladesh, I’m searching for your homeless –
for where they can set up house in the hearts of mango-people,
fruits exploding on shy branches.

Bangladesh, I’m disappointed in your rice grains thinner than rains
and cattle stouter than cannoniers.

You taught me to swim like your river porpoise, causing my ripples
to crawl out and wet girls’ feet on the sands.

Just want to say though how I miss your land. I’m still part
of your root and bud, but my footprint travels less than the simplest leaf.

Mir Mahfuz Ali was born in Dhaka, but left Bangladesh after being shot by a policeman during an anti-war demonstration. After arriving in Britain, he worked as a tandoori chef and a male model. His poetry has appeared in London Magazine, Poetry London, Ambit and Index on Censorship, and was published in the Bloodaxe anthology Ten: New Poets (Bloodaxe Books/Spread the Word, 2010). An unforgettable performer, he has given readings at venues including the Royal Opera House, Covent Garden, and the National Theatre of Slovenia in Ljubljana.