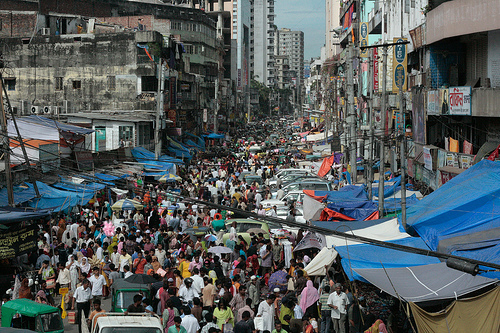 Benevolent words abound in accounts of Hay Festival Dhaka – beauty, interaction, generosity… yet the festival also witnessed to great effect a less congenial aspect of poetic spirit, namely poets’ love of a good scrap! I felt a familiar nervous energy as I watched six young poets climb slowly to the stage to sit impatiently as Eeshita Azad, a formidable poet in her own right, outlined the rules of the game in her role as moderator. Two teams of three poets each, three subjects or phrases picked at random by members of the audience, ten minutes for each poet to include those words in a brand new poem (in Bangla or in English). The audience would then determine which poet and, ultimately, which team won.

I was told that the contest was conceived as a modern take on an old Bengali tradition known as kobir lorai or “poets’ fight”. The ‘fight’ or ‘battle’, apparently in decline and confined to rural villages, pitted two poets against each other in a public gathering, often following a market, where one would challenge the other on some issue and the other would reply in kind. Both poets composed their lyrics on the spur of the moment and performed orally, therefore very little of the poetry itself was ever written down or recorded. Momentary genius designed to serve the moment and dazzle both a poetic opponent and an audience in a nimble feat of mind and tongue.

In Wales we have talwrn y beirdd or “the poets’ cockpit”, the lively title of an extremely congenial contest between teams of poets whose insults are less aimed towards each other than towards the poor adjudicator, who has the thankless task of giving the poetic produce marks out of ten. We have also ymryson y beirdd or “the poets’ contest”, a more spirited affair in which teams of poets receive their subjects a short while before the event (still more than ten minutes). Audience participation is confined to a stomp, a more rowdy competition altogether in which poets compete individually for the listeners’ votes. Having taken part with varying degrees of success in all three Welsh traditions, I both admired and felt slightly envious of the young poets who were now leaving the stage, pen in hand, their gazes already slightly vague in concentration. I wanted to follow them in their futile search for a quiet corner, to see the flashes of inspiration on their faces, to feel the keen buzz of adrenaline as well as the nerves’ bite in the pit of the stomach. Yet I also enjoyed being the listener, just another member of the audience whose participation was purely passive.

I struggle to remember the ins and outs of every poem, the often ingenious way all three subjects or phrases were used to great effect, unexpected and yet, once uttered, somehow obvious. Ripon Parbez’s crowd-pleaser, Quamrul Hassan’s retort, Rifat Islam Esha’s narrative piece, Humaira Noor’s powers of persuasion, Zarin Rafiuddin’s meditation and David Shook’s virtuose performance. Yet a line by line account would betray the transient essence of the contest. Its effect on me endures.

Eurig Salisbury, the Welsh children’s poet laureate, attended the Dhaka Hay Festival in 2012. He won the Chair in the National Urdd Eisteddfod in 2006, and was runner-up in the Chair Competition at the National Eisteddford of Wales on three occasions. His first poetry collection, Llyfr Glas Eurig, was published by Barddas in 2008.

When Bangladesh Floats in a Water-Hyacinth

"I have come to admire/ the resilience of this tiger land..." By Mir Mahfuz Ali