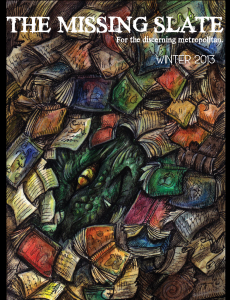 This issue’s opening quote gives it away – indeed, this issue we’re wearing our literature-loving, word-obsessed hearts on our sleeve. This issue is a love letter to the power of literature, the impact it’s had over the centuries, its place in today’s world and what we mean when we talk about literature.

Two special features are part of this issue – the first is a photo essay on a wonderful new initiative led by Oxford University Press Pakistan through their Museum and Archives. Based in Karachi, arguably the cosmopolitan hub of the country, the Museum narrates the story of publishing and literature. The second feature focuses on emerging British poets and includes work from fourteen rising talents. We hope to extend this to other countries and include fiction writers as well (an “under 30” feature is in the works for a future issue).

Also part of the lineup are interviews with entrepreneur bookseller and publisher, Aysha Raja who owns and operates the indie book chain “The Last Word”, and emerging British poet S.J. Fowler. Visuals from Yahat Benazir, Belal Khan, Nazuk Ifitkhar Rao, Andrew Sussman, Lena Winkel, Vee Chayakul, Laura Pelick, Brianna Angelakis and Blumina grace the pages of this magazine and as always, the final product is a collaboration between The Missing Slate’s amazingly talented and dedicated editorial and creative staff.

Speaking of our staff, you may have noticed the growing number of pins on the team map which come thanks to the new internship program for undergraduate and International Baccalaureate students, who have joined TMS in exchange for academic credit. Applications are open year round and staff is expected to rotate. The magazine is now operating from ten countries … take a minute to consider that – we’re in three continents. That’s amazing!

The Missing Slate is a strange creature in the world of periodicals – as a truly global citizen it wears its intentions rather unabashedly. You see, wherever we may be in the world we are connected by, however corny this may sound, the love for creating something that just didn’t exist before. I hope TMS and its team never loses that wide-eyed approach on literature, art and everything in between. It is an endearing part of our identity and I’d like to think our readers agree.

The Literary Life of Russian Airports