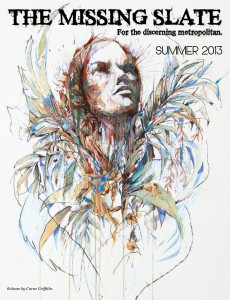 During a team meeting and one of our many tangential conversations about the magazine’s direction and where we wanted to take it, Moeed Tariq, The Missing Slate‘s Creative Director narrated a comment he heard often – many tend to do a mental double-take when they see a liberal arts magazine being edited and chaired by a woman with a hijab. The “woman” bit is less unsettling – the hijab or head scarf, typically a sign of Islamic piety, seems to be in direct odds with our content – both written and visual – that can sometimes be perceived as sexual or “too liberal”. As though wearing a hijab automatically makes me a nun or forces me into a cloistered mentality.

I haven’t stumbled against art and literature with their near infinite iterations on the complexities of everyday existence believing, quite simply, that life’s complicated enough without throwing my external paraphernalia into it. More importantly I’m a writer who chooses to practice her faith in what may seem to be a very public way, living in a country that is daily torn apart by its seams in its perpetual fight against tolerance and acceptance, only to stitch itself back up and begin again. But I love living in Pakistan, with its consistent spread of conflict and generosity that may exist only in lands that are as bipolar as mine.

Perhaps I did struggle initially against what I once thought were boundaries in the arts, but mine has been a journey that isn’t so much tied into religion and its manifestations, as it is with my “conservative” upbringing. In quotes, because whether my upbringing was conservative or the thoughts and actions that resulted from it (and were a byproduct of a combined personal and social mentality), is still unknown to me. Sometimes, the two – conservatism and religion – seem to blur in social consciousness. It is an unfortunate side effect created by those whose minds are cloistered, sequestered into what is “right” and what is “wrong”, which I believe is largely the culprit behind intolerance, rejection, war, and any number of true evils. My right may never be your right, and vice versa; we may never see eye to eye but give me the space and acceptance to live my own life, and I’ll do the same for you. It’s the least I can do, after all.

I’ll end by reiterating Moeed’s response to those who asked the question that began this piece: “and your point is?” Grow with us and we’ll take you into a realm where idealism is cherished and everything possible.

Over the next few weeks, we’ll be presenting our digital edition week by week (through a constantly updated Table of Contents). But if you’re impatient, here’s a link to the direct download.

“He would sit beside it and watch the colours of the sky transform it as if the sun bent around the horizon just to take a peek at the angles and crevices of its metallic beauty.” Story of the Week (October 18), by Anam Abbas.

To Reality and Beyond!

In this essay, Senior Articles Editor Aaron Grierson writes about freedom in the digital age and just what it means...