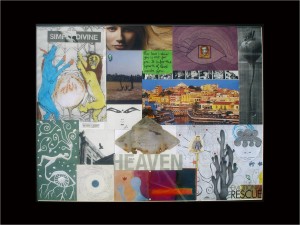 Ma doesn’t hear it. She’s asleep, snorin’ like an old brown bear after a dogfight. Don’t know how she manages that. ‘Cause I can hear it. The whole valley can hear it. The machines are huntin’ tonight.

There ain’t many of us left. Humans I mean. Most people who could do already escaped. Or tried to escape anyways. I don’t know what happened to ’em. But we couldn’t. Ma lost her leg to a landmine and can’t walk. Sometimes she gets outside the cabin with a stick. Mostly she stays in and crawls. The girls do the work. I’m the man now.

Pa’s gone. The machines got him. I didn’t see it happen but my uncle came back for me. Took me to see Pa gettin’ buried in the ground. There wasn’t anythin’ of Pa I could see that let me know it was Pa. When the machines get you there ain’t much left. Just gristle mixed with rocks, covered in dust.

“Yeah,” I say. I take it out from under my shawl. It’s a piece of mirror from the white pickup we found all flattened next to the stream. Truck looked like a giant gone stepped on it. I’d asked Omar how big the machines were and he’d said not that big. Not the ones we had ’round here. But he’d said talk was there be bigger machines out there. Out in the southlands. Machines that could walk. So big each step sound like thunder.

Machine’s a mighty thing. Makes you feel small, way it hangs up there. Hits so hard a whole family be gone just like that. But even machines can’t yet kill a mountain. Can’t fly in no cave neither.
At night I sometimes couldn’t sleep ’cause I thought I heard ’em big ones comin’. But they never came. Most likely, there was no such. But my sisters still said if those machines come they surely kill everythin’. They said you’d better run when you hear those machines comin’. But what do they know. They’re just girls. They get so scared sometimes they go pee inside when they’re supposed be asleep and Ma has to thrash ’em. I only done gone pee inside once, and ’cause I’m the man now Ma ain’t thrashed me much that time.

But there’s no thunderin’ tonight. Tonight there’s that other sound. Sound of the machines that fly. That’s the kind of machine we get in these parts. You can’t see ’em at night. Sometimes you can’t see ’em in the day neither. But you hear ’em all the time, huntin’. They’ll go away for days. Sometimes weeks’ll go by and you ain’t heard ’em once. Then they’ll be back and there’ll be a burial. Ain’t no-one never killed a machine in our valley. But Omar and I reckon we’ve got a chance of it when the sun comes up. Only first we got to get ourselves in position.

We stride on up the stream to where there’s a shell of an old car in it. Like bones that shell. Orange bones. Split open on top like somethin’ reached down from the sky and yanked the driver out with a fist. Stream flows right through this car. Ain’t no doors or wheels. There’s a way up from this spot people don’t take no more. Past rocks and mud that used to be cabins once. I remember visiting those cabins. Boy by the name of Yousuf used to live there. No-one likes to think about what happened to him. Throwin’ yourself off a cliff be better than that, even if it do mean goin’ to Hell.

Moon’s out so we can see. Omar keeps looking back. “Ya see that?” he asks me.

Truth be told I ain’t comfortable bein’ out here at night. We get wolves comin’ through the valley. Most part they stay well clear a’ you. Unless maybe they ain’t had a kill in a while and you be alone. When you’re small you got to be careful. But Omar’s gettin’ tall now. Wolves’d likely think he’s a man. More dangerous ‘n wolves is people. But we’re quiet and we got good ears. More dangerous ‘n people is machines. If they hunt you at night, ain’t nothin’ can keep you safe. Not if you’re in the open. I pick up a rock fits my hand good. Case there’s wolves.

Not far of the ruined cabins we put our weight to a boulder. Move it, though I get a thumb caught. Bleeds a bit. Behind it there’s a sack of plastic. Omar found it. Boulder must’ve shifted after an earthquake. Inside the plastic’s some dirty cloth. Inside the cloth’s wrapped up what we need. The she-piece’s like a Kalashnikov. Black metal ‘n brown wood. The he-piece’s a black hand on a green arm. Put ’em together and they’re like a wasp with no wings. Ain’t neither of us fired one, but you’ve a pair of eyes in this valley you’ve likely seen enough to know these rockets can fly. And we mean to have ours bite us a machine.

Alexander Payne’s Nebraska may not be a feel-good road trip movie, but Film Critic Jay Sizemore writes on why it’s a journey we all need to take.

i wait for images to crystallize

From our ninth issue, a haunting poem by Spotlight Poet Ilona Yusuf