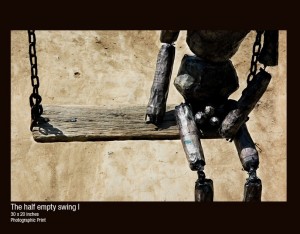 There wasn’t a rickshaw in sight. I’d thought 11 pm would be a reasonable time to flag one, but only a few cars and several motorbikes – liberated of their silencers – poured out onto the street before me. A moment of panic: there were no taxis in Lahore. Maybe I could hitch a ride? It was a seven-minute drive to my destination, at most, and strangers had been surprising me lately with their trustworthiness.

Behind me, the theatre was now nearly empty. Walking back didn’t seem impossible, but wasn’t the wisest option either. A few guards, noticing my restlessness, expressed concern, “Beta, where do you want to go?”

“Where do I get a rickshaw?” I asked. I calculated that I could walk some, if not all, of the way back. Worst-case scenario: I knew one of my friends would still be up, and a car rescue mission could be summoned. Though it would probably take him the same amount of time…

“Right, wait here!” the guard interrupted my planning. “Don’t worry. If it doesn’t show up, we’ll go get you one.” Right then, almost as if on cue, a rickshaw appeared before us, screeching to a halt before my feet. Without haggling for a better fare or thinking much at all, I hopped in.

Something else came to mind: I had promised my friend I would pick up cigarettes. The rickshaw wala grinned when I asked him to look out for a roadside stall. “We will definitely buy cigarettes!” he said, enthusiastic about his mission. I double-checked to make sure we were on the right route – basic safety protocol for traveling late at night – and reluctantly, allowed my mother’s voice to permeate my thoughts. Going out without a plan, beta? Travelling alone at night? Still, this was Lahore, not Karachi. And I knew my way around by now.

The rickshaw coughed to a violent stop outside a row of half-shuttered roadside shops. In the quiet glow of two light bulbs, a makeshift stall was still open. I jumped out, while the driver triumphantly parked and darted off on foot to get more fuel.

A few men loitered around the footpath, their eyes slowly refocusing on the lone woman walking towards them – a necessary rite whatever the time of day. I wanted to say something, but had internalized another drill: the best course of action was to avoid them completely, ignoring the discomfort of eyes glued to you like clammy insects. I walked straight up to the seller.

I wanted to say something, but had internalized another drill: the best course of action was to avoid them completely, ignoring the discomfort of eyes glued to you like clammy insects.
A pack was exchanged for a hundred rupees. The rickshaw wala wasn’t back yet. Male stall-keepers, more men smoking in the distance, teenage boys on their way somewhere, or perhaps back from somewhere – all stood with gazes firmly fastened upon the only woman around. I quickly decided it best to sit inside the rickshaw, rather than wait on the road.

I’d hardly settled when the door banged open again. I froze, finding a policeman’s face staring squarely into mine. “Yes?” I stammered. Guilt inexplicably made its way into my head. What else can a woman feel when caught travelling on her own against all caution?

“Is something wrong?” I asked again, unsure. But with one quick sweep of his eyes around, he shut the door and left, as abruptly as he had come. I sat, confused, the door bouncing faintly on its frame. “What was he looking for?” I asked the rickshaw wala later, once we were back en route, suspecting I had just passed an alcohol or drug check.

The night was buzzing with faint street-sounds, and the rickshaw wala took a while to reply. “Sister… it’s late, you know,” he answered, hesitatingly, “Sometimes, boys and girls go roaming around together.”

by Rafael Ayala Páez. Translated from the Spanish by Roger Hickin.