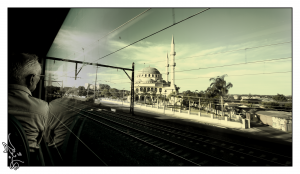 In early 2011, Homs is on the brink of civil war, with rising tensions and the promise of impending atrocity. Clashes have erupted between government supporters and “rebel forces” – religious radicals and advocates for democracy who are united against the common enemy, dictator Bashar Al-Assad. As civil unrest begins to increase, a siege of bombs and shells and violence descends upon Homs, and the city finds itself at an epicenter of what history will dub the “Syria Crisis”.

Among all this, Fadiyah* carries herself with both the confidence and eager kindness of a young doctor. She is a woman who says she “became a doctor because [she] wanted to help people.” She has striking black waves of hair and breaks out into heartfelt laughter at several points during her story when the anglo-arab divide falls between us and she resorts to gestures and signs. While this renders her story almost humorous in parts, it never loses its essentially powerful nature.

During that time Fadiyah was working as a doctor in the Emergency Room at Homs’ central hospital. When the hostile climate eventually shuts the hospital down, Fadiyah decides to open her own private practice on the ground floor of her house. Equipping her practice with additional serums, medication and instruments, even the ones that are usually only reserved for the E.R., she continues to take in and treat anyone who arrived at her door amid the escalating violence.

Huddled inside this room, with the noise from the mob outside echoing, she is, in her own words “preparing to be killed”.
One April morning, at 5 a.m., Fadiyah is woken up by insistent knocks at her front door. She finds herself standing in her door frame facing fifteen government soldiers. One of them is severely wounded: a shot has entered the right side of his abdomen and exited from the left, causing excessive blood loss, and leaving his intestines spilling out of the wounds. She rushes him into her medical room and goes through the standard procedure for intensive care: applying pressure, administering serums and trying to replenish the loss of about 4.5 liters of blood. The human body normally contains a total of 5 liters of blood.

Five hours later, Fadiyah is still working to keep the soldier alive, but the intensive care treatment that she has been providing usually only lasts for minutes before the patient is taken in for immediate surgery – a procedure she does not have the facilities to perform in her home. Meanwhile, a mob of about 300 angry, armed men has surrounded the house, effectively trapping Fadiyah, her family, her patient and his comrades, inside.  A few rebels heard about the government soldiers being taken into a civilian’s home several hours earlier, after which the first outbursts of violence began. Grenades are launched; an exchange of gunfire between them and the government soldiers protecting the house follows.

As the mob grows, the soldiers begin to retreat. With them, Fadiyah and her family members seek refuge in a small room on the third floor of the house, about 3 x 3 meters, as far out of the reach of the armed rebels as possible. Huddled inside this room, with the noise from the mob outside echoing, she is, in her own words “preparing to be killed”. Her patient begins to lose consciousness. They hear the front door being broken down, followed by the sounds of men searching the house, floor by floor. The door to their room is wrenched open.

Fadiyah immediately shouts: “Do not shoot us! These men are your brothers. It is not up to you to judge them, it is up to God. This man is badly wounded and needs to be taken to the hospital straight away.” The armed rebels do not respond, nor have they looked at her directly since entering the room; they are orthodox Muslims who are not supposed to look at a woman, especially not if her hair is uncovered the way Fadiyah’s is. But they do not shoot either. Fadiyah is baffled when, a few moments later, they simply round up the government soldiers and escort them out, leaving her and her family unharmed.

“Maybe it was God or luck or fate”, she says with a smile, gesturing ambiguously to the sky. A few days later, Fadiyah learns that the soldier was indeed taken to a hospital. These men had refused to look at her but they had heard her, and more importantly, they had listened.

Since the incident, Fadiyah has moved just outside of Homs with her family, where life is quieter and the violence less immediate. She recounts the events in the peaceful comfort of a living room in Amman over mint tea and fresh oranges. The most striking thing about her story is not the incredulity of the content or the complex humanity found in the details of a war. It is the calm and natural way in which she tells it, the way she pauses patiently and smiles when trying to find the right English word in the middle of a terrifying sentence. The way she mixes up “I was preparing to be killed” with “I was preparing to kill” and, upon realization of her mistake, breaks into laughter. It is in those little suspensions that she presents to us the full extent of her beautifully infectious humanity.

To uphold one’s convictions even in the face of a nascent civil war, where systems of justice or moral principles are readily abandoned in the name of religious or political beliefs, is an act that requires extreme courage and commitment and strength.

Fadiyah is a remarkable hero. But when we tell her this, she simply laughs, embarrassed.

* Name has been changed to protect identity.

“One day, I will escape, though, perhaps over the rooftops.” Story of the Week (March 10), by Medardo Fraile. Translated from the Spanish by Margaret Jull Costa.

"Is it me? The eternal foreigner afraid/ of even the sidewalks of this new country, even the/ sunlight bites." By...