Empowering the damsel in distress 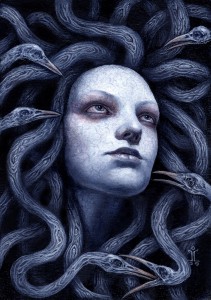 Once upon a time, there was a damsel in distress being attacked by an evil troll. A handsome prince came riding in to rescue her, sword in hand, but tripped over the dragon’s tail and passed out. Luckily for the damsel, this distraction gave her the chance to draw her concealed weapon and shoot the dragon. Then she quickly took hold of the handsome prince and fled, rescuing him. He didn’t feel emasculated, and she didn’t really feel anything other than an adrenaline rush, because she was used to taking care of herself, instead of waiting for a proverbial knight in shining armour. And they lived happily ever after. The end.

But wait! You exclaim. That’s not how stories go! Perhaps not, but it’s how the TV show Once Upon a Time goes, and it’s certainly better than the ancient, centuries-old stories it is very loosely based on.

Even now, in today’s globalized, culturally diverse world, the fairytales of the Brothers Grimm and their more sanitized offshoots are widely read by both children and adults. The former category is perhaps amusing, considering that the oft gruesome tales were never meant for children in the first place.

Certainly, other storytellers have not operated under the “blood is thicker” illusion; in Charles Perrault’s version of ‘Sleeping Beauty’ for example, the story doesn’t end with the princess’s rescue, as the princess and her children are in danger from the prince’s ogre mother, who has to be killed in the end. This version of the classic goes beyond the happily ever after, and is less of a cautionary tale and more of a story. Moreover, Perrault’s stories are less morbid; his Cinderella forgives her sisters in the end, and marries both siblings off to grand lords in the castle. On the other hand, Perrault’s ‘Donkeyskin’ is a tale of incest, where a king seeks to marry his own daughter, because no one else matches his late wife’s wit or beauty. For the Grimms, such a story would have been a travesty, since for them biological connections were almost sacrilegious.

This tendency towards emphasizing biological relations may be harmless enough, but the Brothers Grimm also changed the female protagonists of their stories to match their ideal of how a Christian woman should be: beautiful, kind, submissive, waiting to be rescued but unable to take charge of her own destiny. Powerful women on the other hand, were not blessed with beauty, talents, or good traits like kindness or gentleness; they were just evil. And while the good male characters were stereotypically male, strong, aggressive, rich, powerful, etc. the good females were only “good” so long as they remained helpless and lacked agency.

This is where Once Upon a Time is different. It isn’t an adaptation, but a modern-day and more socially relevant retelling of classical fairytales. Classic stories have been modified and linked to give the female characters more agency and, crucially, more depth. Evil female characters have real motivations beyond their genetic predisposition.

The one aspect of the Grimms’ tales that Once Upon a Time has retained is the emphasis on the role of mothers. While the brothers portrayed all stepmothers and step-siblings as evil, many stories center the entire plot on the mother alone, such as ‘The Goose-Girl’, ‘The Wolf and the Seven Goslings’, and ‘The Brother and Sister’. The stark contrast between the two sources, however, cannot be ignored. Whereas mothers exist quietly in the background for the Grimms, in Once Upon a Time, they are dominant, aggressive women who simply could not be anything but the main focus of the story. The plot of Once Upon a Time, too, initially centers around three mothers: the morally ambiguous but devoted stepmother, the mother torn from her infant daughter, and the mother who once gave her son up for adoption.

“A literature such as ours, which is slowly maturing and coming into its own, is often hauled over the coals for being elitist, or unrepresentative of the “true” Pakistan,” writes Sana Hussain. This generalization betrays the talent the industry has produced.

"I did notice, though, that the best oranges/ came from the most withered tree" Weekend poem, by Jeffrey D. Boldt