“He suddenly recalled from Plato’s Symposium: People were hermaphrodites until God split them in two, and now all the halves wander the world over seeking one another. Love is the longing for the half of ourselves we have lost.” – Milan Kundera, ‘The Unbearable Lightness of Being’ 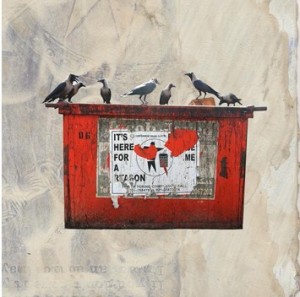 Lately, I am discovering that it is perfectly possible to congeal and compound simultaneously. I appear to be driven presently by this odd, portentous and rather stubborn sense of self that I have acquired ad hoc during the past year. In some respects, I feel that I am being rather pig-headed about “picking up the pieces” of my life following my divorce, and that I may have overreached far beyond my capacity. I find myself somewhere in the middle of constructing an entirely new existence. I’m terrified of anything remaining the same as before, lest it lead me down the same inevitabilities I chose last year. I have always been at odds with my own person, but it is different this time. In the past, my personality and my surroundings have generally remained inversely proportional, but now I scour the edges of an odd prefix trying to fight them both simultaneously. I suppose this is how one whittles a new self into being. Kind of like instant coffee, divorce can give you enough of a delayed caffeine kick to motivate instant personality.

You may or may not have gathered by now that I have always been one of those people who know what they don’t want from life much more clearly than what they do. This approach, constructed out of confetti that was narcissistic, nihilistic and needy in equal measure, has served me well so far. Most people aren’t like that, are they? After all, one can deduce that self-love and self-loathing are parallel emotions, but there are few who acknowledge both simultaneously. I now see myself rather desperately and actively trying to look for things that I do want from my life. I find myself rudderless, which pushes me into pretending I am ready to weather any storm simply because I cannot abide acknowledging how terrified I am of just floating through.

I find myself rudderless, which pushes me into pretending I am ready to weather any storm simply because I cannot abide acknowledging how terrified I am of just floating through.
It’s rather amusing, if one is inclined to appreciate irony in the face of crippling doubts. I hope you are such a person; I find being able to laugh at one’s misery adds a somewhat endearing brand of gravitas and whimsical idiocy to one’s personality. I know I always enjoy the company of people who are, in equal parts, self-depreciative, self-doubting, genius and absurd. I always believed that the key to my own survival has been the fact that I do not expect happiness from life. My childhood set me on a default path where I don’t just expect things to go wrong, I know they will. This has almost never phased me. It has always been joy that surprises and lifts me, purely because of how unexpected it is. I recall my therapist once telling me that this was “such a cynical way of going through life,” while begrudgingly acknowledging the sheer titanium durability of my coping mechanism.

The way I figure it, people who are naturally optimistic have much more cause for disappointment and are frequently crippled by the fact that life does, in fact, often suck. On the other hand, those of us who work from within the reality of that premise have a much better shot at enjoying the rare small pleasures life affords when and where we get them. We are not perpetually tiptoeing around the pitfalls of expectation. And who’s to say that real optimism isn’t born out of that peculiar brand of perennial pessimism that allows one to occasionally laugh at life when offered the chance, rather than the hackneyed one-liners about God’s reasoning or silver linings that are much more likely to lead to emotional collapse? I always come back to the pre-Socratics during these proceedings. Heraclitus teaches us that everything in nature changes. Parmenides, on the other hand warned us that the only things that are real in this world never change. When you pit both ideologues against their ideas, you are soaked in one reality: nothing is real.

And that is why I make lists.

The goldfish that swallowed my ashes

"The goldfish that/ swallowed my ashes/ now heads down the Tiber." Weekend poem, by Daniel Roy Connelly