Within a mythos where females generally exist as victims, hysterical murderers or at best, side-kicks; vampire women, taking center stage, presented as complex characters who act according to their own moral code are exceptions — all the more so when the central relationship is one between parent and child. Claire (Gemma Arterton) and Eleanor (Saoirse Ronan), the main characters of Byzantium, are vampires who also happen to be mother and daughter. The two of them move around often to avoid enemies from Claire’s past. Although Eleanor is aware of some of the facts, she doesn’t completely understand the danger of their situation and constantly feels stifled by the life they lead. On the other hand, Claire, despite appearing independent, is the one who needs Eleanor’s companionship the most — something that becomes even more obvious after the revelation of the “missing years”. But in the end, children must grow up and find their own way. The main source of conflict of the film is the way the two characters deal with this impending fact and the ensuing emotions.

Neil Jordan’s Byzantium is a somewhat perplexing experience, due in large part to its unevenness. We have an amazing central performance from Gemma Arterton coupled with a rather bland one from Saoirse Ronan, and various levels of over and under-acting from other cast members. We have the potential for a great story stunted by an underdeveloped script. We have good direction coupled with cheap-looking special effects. The film hiccups along its path, guided by the narration of a character who manages to elicit some sort of irritation with every other intervention, and is saved, almost single-handedly, by the presence of Gemma Arterton, who shines brightly enough to compel the viewer to keep watching as her story unfolds.

Perhaps that sounds like harsh criticism, and by some standards, it might be. Perhaps if the film had less promise, the disappointment would also be lessened. The creation story is interesting and somewhat unique, but it is presented in a way that strips it of any conflict-generating qualities. Certainly, the conflict is generated by the men who have taken possession of the “secret” and kept it to their brotherhood, but unfortunately the brotherhood as an entity pertaining to the in-film universe is painfully unexplained and therefore stunted in its effectiveness. But the most puzzling character of all is played by Sam Riley, who by himself makes up for about half of the film’s contradictions. Many of the character’s interventions are poorly disguised plot devices meant to move the story along without having to set it up in advance, but what can we do but forgive much of it, since Riley looks so dashing trying to make do with what was written for him? Besides, compared to the almost hilarious overacting of Caleb Landry Jones, his efforts look even more praise-worthy. Now, not all is bad, far from being so, and despite the shortcomings the film doesn’t fail to be entertaining, but most of that is owed to Gemma Arterton’s portrayal of Claire and to the delicately painted balance between her and Eleanor. Eleanor narrates Claire’s story — and anchors herself in her mother’s story in an attempt to find her own identity — from the time she was young — poor and an easy prey for the arch-villain of the film — to the time when, fed up with the steaming tray of disappointment life had served her, she decides to fight for her own survival any way she can — even committing a sacrilege she does not (at the time) understand. 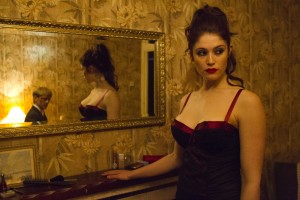 The film is shrouded in melancholy, and the city by the sea, where most of the action takes place, is the perfect setting. Its cloudy, muted colours present the perfect stage for past and present to coexist, if not peacefully, at least naturally. Eleanor’s visions of the past are a way to reflect on the passage of time — the changes and the lack of change. While Eleanor’s colours blend into those of the setting, with only token reds here and there reminding of her true nature, Claire’s vibrancy stands out all the more — in dark green or deep red. Such is the contrast between the two characters, one asserting herself, guided by her own sense of justice, truer to her instincts — using whatever means to survive and to protect her daughter — and the other, closer in spirit to the world of mortals, wishing to belong and yet unable to, because the awareness of what she is makes her keep her distance.

The end is both satisfying and not – or rather, the end result is satisfying despite not always using the best means of getting there. Despite the need to overlook some elements in order to achieve full enjoyment, Byzantium is nonetheless a very enjoyable film.

Panorama from the Top of the Wicker Arches

"To the edge of the heart. To the periphery/ where ghost kids kick phantom football..." Poem of the Week (August...