‘Another Country’, Anjali Joseph’s second novel, shifts between Paris, London, and Bombay. This excerpt is taken from the first section, in which Leela Ghosh is working as a language teacher in Paris. Here, we follow Leela through “the morning after” — waking up from a night spent with Simon, a “reasonably handsome” and effortlessly charming friend of a friend… 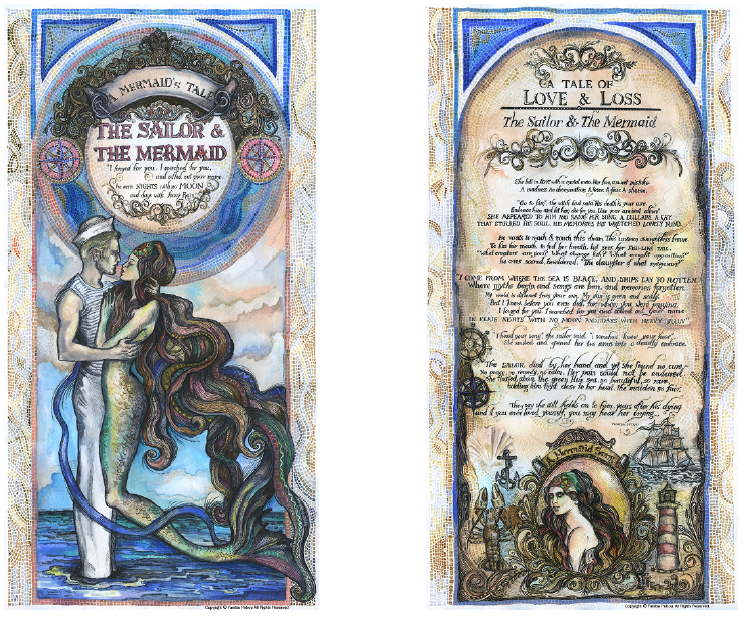 The Sailor and the Mermaid by Fanitsa Petrou

When she woke it was early. Cold morning came through the skylights. Simon slept on his back, his breathing audible, like a standing fan. One arm came out of the covers. His hair was rumpled. She felt no desire to touch him, and recollected their long and exhausting feints in bed – the various things he’d done, with which she’d cooperated, increasingly wishing she’d gone home: his putting his fingers roughly into her to feel her wetness, then licking her, something she found intensely embarrassing, and this time, not particularly arousing, and finally sex. She had thought she might come, but hadn’t; had wondered whether to pretend, however that was done, but hadn’t; he had persisted for a long time before finishing. After that he’d tried to touch her, instructing her to move against his hand, but she’d said instead that she was tired, and he had rolled over. How was it possible, when you’d had an apparently urbane, socially competent time earlier, to find yourselves behaving so ineptly when unclothed? She had failed, she supposed; yet, obstinately, she still wanted to be loved.

Confused, parched, and with an incipient headache, she got up from the edge of the bed where she’d lain all night for fear of being caressed in sleep, or the desire that if this happened it should be done deliberately. There were her clothes, strewn about the floor. She picked them up, looked back at Simon, who snuffled and moved the arm that hung off the bed. There was a book on the floor. She moved it to the armchair, then tiptoed down the stairs with her clothes clutched to her. In the beautiful living room, hunched near the bookshelves where she was least visible from the street, she put on her clothes, first her bra, then her pants, wincing at the slight soreness. She looked round the room when dressed, as though to gauge its expression – would she and this place meet again? In the bleached light, the furniture was impassive.

Near the hall table, next to Simon’s desert boots, she found her shoes and pulled them on. She managed to slide back the door bolt, and shut the door behind her. The landing and stairwell were now those of many Parisian buildings. As she walked through the cold interior courtyard, the stone was slimy with dew; black plastic bags gave off overripe odours.

She briefly feared the outer door wouldn’t let her leave, but she found the button to press and slipped into the street. It was raining, and cold. She walked slowly home, reassured by the quotidian misery of the Monoprix, with its fluorescent lights on against the dim day. It was eight o’clock. She bought bread, milk, and coffee. As she crossed the road towards her building, she saw in the alcove of the Crédit Lyonnais the mad old woman, wrapped in her layers of clothing, sitting on the stone ledge. She held a Styrofoam cup of coffee in claw-like fingers. Leela walked towards her, trying not to look, and angry eyes burned into hers. The old woman spat.

In the studio, Leela took a shower, then made coffee. She turned on the television, the lights, the electric heater, and sat on the floor cushion. Late episodes of The Bold and the Beautiful, dubbed into French, were airing, and she watched one, depressed by the huge jaws of the men, their suits, the women’s heels and tans and bouffant hair. The rain became louder, smashing on the thick pane of the single window. Leela imagined floods, people’s cold, wet stockinged feet on the tarmac outside, bus horns, Paris cursing. She didn’t have to go to work. She thought of Simon, when they’d been chatting in the kitchen, saying he kept his car in a garage nearby, that they should take it out and go for a drive in the country one weekend, and she wondered abstractly and yet inquisitively, as a child to whom something has been promised, whether this would happen. Maybe Simon would be her boyfriend? She imagined them doing the things couples did – being seen here and there – and she pictured Patrick’s face when he saw them. But she could see it as nothing other than pleased, if surprised, and she stopped thinking of it and hunched tighter on the floor cushion.

When the programme ended, she went to wash the cup and cafetière, and saw the Chinese student in the window opposite. The air outside was dark and stormy; the light in the toilet was on, and while she washed up she glanced across and thought how cold the little cubicle must be. When the man in the facing window made a gesture of privacy – buttoning up his trousers – he lifted his head and turned, as though drawn to the facing light in her window, and she thought their eyes met for a moment before, embarrassed, even slightly sad, both quickly turned away.

*This piece has been excerpted from ‘Another Country’ (Fourth Estate, 2012), reprinted here with permission of the author.

Anjali Joseph was born in Bombay. ‘Saraswati Park’, her first novel (2010) won the Betty Trask Prize and the Desmond Elliott Prize, and was joint winner of the Vodafone Crossword Book Award for Fiction. ‘Another Country’, her second novel, was published in 2012 and was longlisted for the Man Asian Literary Prize.

From a Facebook page to bringing out Pakistan's first true comic book, Ghausia Rashid Salam traces the progress of the...