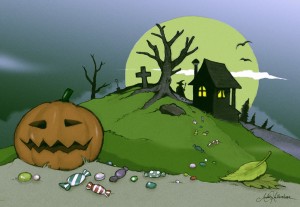 Artwork by AndersrednA on Deviantart.com

It may bring to mind gleefully cartoonish images of grinning jack-o-lanterns and wide-eyed trick-or-treaters, but the word ‘Halloween’ originally derived from the Christian holy day of All Hallows Eve, a time of commemoration for departed saints and loved ones seeking safe passage into heaven. The festival was traditionally a more solemn, perhaps even fearful occasion, its rituals warding off not only the fiery abyss but the malign spirits silently, vengefully walking among us. Only once the rise of science dulled our superstitious inclinations and strict adherence to religious dogma did Halloween morph into the holiday we know today, this light-hearted celebration of all things eerie and supernatural, spread particularly via western media into all corners of the globe.

The two films best encapsulating the evolution Halloween has undertaken may be those most openly paying tribute; John Carpenter’s Halloween, a film which upon its 1978 release rapidly became the most momentous scarefest since Alfred Hitchcock’s Psycho, and Rob Zombie’s 2007 interpretation, which holds the same mixture of reverence and resentment toward its predecessor as Norman Bates had for his mother. Carpenter’s Halloween freshened up many of Psycho‘s most successful tropes for a new generation of devout movie-buffs, and got assimilated into horror movie lexicon before the world had a chance to scream. Hordes of fresh-faced would-be heirs fell short of the compositional elegance, slyly suggestive imagery and inimitable mood-construction of a young Carpenter sailing off the back of Assault on Precinct 13. The film started to date by the day, the tropes becoming old hat. Kids could telegraph every move, having witnessed them second-hand through multiple branches of pop culture. Nowadays, Halloween‘s unimpeachable reputation is preserved largely by cinephiles for its historical significance and formal intricacy, though the novelty has long since worn off.

The movie’s basic paradigm–a group of young, promiscuous girls are picked off one-by-one by an unstoppable psycho, until only the virgin remains–will be familiar to even the most casual moviegoer, with many of the equations intrinsic to the slasher sub-genre. Even so, no other film-makers have viewed their masked psychopath with such paralyzing dread. There are no empathetic explanations for Michael Myers’ killing spree; he’s described on many occasions as a force of pure evil, a bonafide boogeyman. His adopted visage is not so much expressionless as a subtle caricature of expressionlessness, of the unfathomable violence that characterizes many great screen terrors.

Ironically, given how revolutionary the film became, the 1978 Halloween emphasizes the most conservative elements of the titular festival; a desire for safety and preservation, plus a fear of losing the same. Myers is a projection of Carpenter’s concerns for the next generation, and Halloween is a series of chilling images wherein this anxiety invades an old-fashioned middle-class suburb; Haddonwood’s calm, neatly-trimmed sanctuary of security and innocence suddenly violated by horrors emerging in the background. The spirit inhabiting the demonic Myers is precisely the force Halloween rituals conventionally sought to ward off, and his victims are only punished after transgressions, specifically of the sexual variety. Laurie, our virginal heroine, is affiliated with a utopian view of western suburbia until she herself steps off the beaten path (in a literal sense, she crosses the road and enters a den of depravity; metaphorically, her lust for a “cute” boy is revealed), whenceforth she starts to be victimized too. The film shares its generation’s worries about an increasingly atheist, sexually active future for its children, where old Christian customs are slowly being abandoned and everything is quite literally going to Hell.

For Rob Zombie, that future can’t come soon enough. He’s a champion of precisely the cultural degeneracy Carpenter’s film is so afraid of; his songs and movies are notorious for reveling in sleaze, darkness and debauchery. Naturally, his rendition of Halloween humanizes the evil that Carpenter staunchly refused to let us comprehend; Myers ain’t so unfathomable after all, says Zombie, so give him a little sympathy. While Carpenter gave his killer little to no back-story or personality, Zombie outlines the boy’s white trash background in painstaking detail, growing up in the kind of clutter-strewn home where broken families spend their time hurling profanities at each other. Where Carpenter’s adult Myers was a faceless, primordial force, Zombie’s is a hulking long-haired warrior whose killings, particularly those inflicted on a couple of rapists in a scene that didn’t make all the cuts, are more glorious than disturbing.

Carpenter’s film saw a world of Rob Zombies coming and desperately tried to stave them away, but what was once an object of terror has become a sympathetic, admirably badass anti-hero in these more liberal times. The traditional good/evil dichotomy has lost its hold, and tools for conservatism have morphed into the very opposite. Zombie’s film isn’t entirely successful—sometimes its fealty to the original is too strong and the subversive spark dissipates into awestruck homage-but at its best it’s an emblem not just for the fun of modern day Halloween, but a culture no longer afraid of its own shadows. Still, it would be unwise to dismiss the original as a mere museum relic; it retains relevance as an expression of pure, naked fear toward the unknowable perils of an increasingly amoral future.

For the complete Halloween experience, you could do worse than watch a Halloween double bill when October 31 rolls around.

Film Critic Tom Nixon is a member of The Missing Slate’s Film Team.

“…every poet writes from exile. For myself, it took me a long time to acknowledge I was an immigrant.” Nancy Anne Miller, The Missing Slate’s November 2015 Poet of the Month, talks with Afshan Shafi.