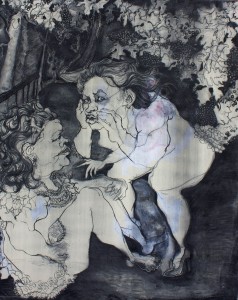 I know it’s a dream because the cobra is banded like
a sea snake and the sea snake
is preparing to spit. Then there are these little

ones ashen as bean sprouts dropping out the sky-
(the term I was looking for is “rain harvesting”).

I was once about to purchase a bottle of snake wine
until I realized it won’t ship where I live.

some in Tamil Nadu believe the komberi mookan
sentinels from treetops until its victim has been cremated.

Arjun Rajendran has published in Eclectica, nthposition, Softblow, QLRS, Tongues of the Ocean, WLA Journal and other publications. He serves on the editorial board of The Four Quarters Magazine.

“This letter does you about as much good living as dead, so I opted to share it only when doing so wouldn’t disrespect the bounds you so clearly set forth in your life.” Mandy Shunnarah writes to her dead mentor.

"Paralyzed with fear, I shut my eyes tight while my heart pounded and the darkness seemed to quiver around me."...