Last year David O. Russell wowed us with Silver Linings Playbook, a great, heartfelt twist on the romantic comedy formula, with Bradley Cooper and Jennifer Lawrence playing the damaged souls needing love to heal them. This year, Russell brings us a delightful twist on the gangster film, artfully and authentically recreating the look and feel of the seventies, in the setting of a con game. He brings with him an all-star cast, including Lawrence and Cooper along with Christian Bale, Amy Adams, and Jeremy Renner, all of which, except for some inconsistent accent execution by Lawrence (which is only noticeable if you pay attention to it), play their roles to Oscar caliber success. 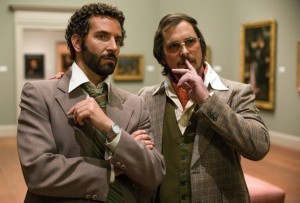 The film plays out like a beautiful marriage of cinematic styles, deftly weaving elements of Tarantino and Scorsese, both of which are acknowledged with subtle nods throughout. Among these are two direct references to Pulp Fiction, with Cooper drawing a square in the air just like Thurman, and a recreation of the infamous trunk scene. Then, there’s the fact that Bale seems to be channeling Rob De Niro throughout the film, his narration very much sounding like the narration from Casino, and in a scene where the characters meet Las Vegas mobsters to talk about a casino deal, Rob De Niro is there, playing a character that is dressed to look like Martin Scorsese. These are fun things to notice for fans of these films.

We are told at the beginning that “Some of this actually happened,” allowing for certain stretching of the facts from the actual events the film is based on, and also providing a jumping off point for the game the audience is about to be involved in. This movie is after all about an elaborate con, and starting off with a message like this, puts the audience in the mindset of trying to read between the lines, to determine what is real and what is fiction. This is just what people who may wonder if they are being conned have to worry about, which is a great way of setting up the tone of the film, putting the viewer in the same mindset as the characters involved in the actions onscreen. This tone is played through to the end of the film, keeping the audience guessing until the actual con is finally revealed, to brilliant cathartic effect.

Another success is Russell’s direction. In Kubrick-like fashion, camera movements take on symbolic meaning. There are moments where the camera moves from a headshot, pushed down, momentarily hanging on the cleavage shown by the revealing wardrobe worn by the women, and then down and to the right. This camera motion provides two possible meanings, either flaunting the fact that sexuality is often used to distract us from true motives or events, or that the art of misdirection is part of every successful con. There are also references to drug use, ranging from possible methamphetamine with Jennifer Lawrence’s character, as the first time we see her, she has bright red burn marks on half of her face, because she started a fire in the house, Bradley Cooper is an FBI agent who is snorting cocaine, Amy Adams rubs her arm like a heroin addict, and Bale and Renner are possibly alcoholics, waking up together in one scene after an all night bender. I am sure there is more to this element which may be revealed upon multiple viewings. It works as another part of the game with the audience: what is real, and what is not?

However you read the symbolic undercurrents of the direction, viewers are sure to be exhilarated by the hilarity of the events, and the excellence of the performances. This movie is another brilliant work of art, from a film maker who is proving himself to be someone to watch every year, capable of telling great stories, while retaining his own artistic vision, elevating his work from the hordes of mediocrity to a level of inarguable near-perfection. This is easily one of the best films of the year.

The Newsroom has already received a lot of criticism for its portrayal of how the news is actually sourced and broadcast. People who work…

"I mourn my Uncle Ali's beautiful son/ I mourn those somber sparrows soaked to the skin/ I mourn the dark...