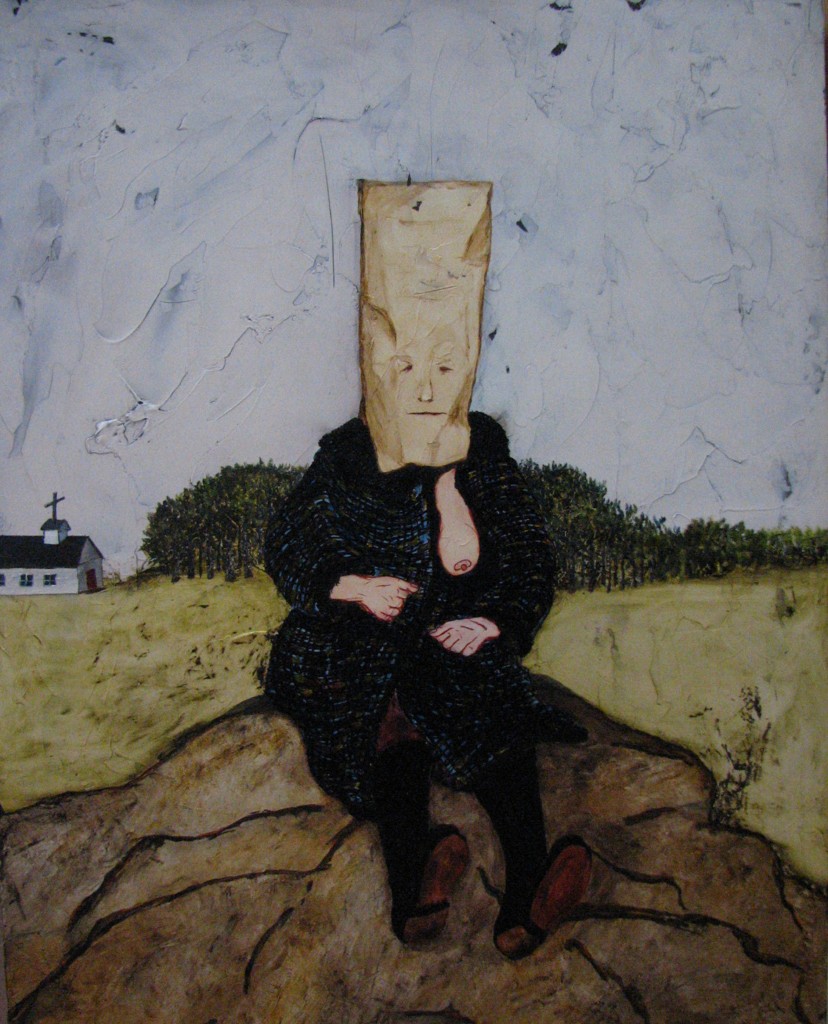 Poisoned from birth by emotional subservience, my husband learned very early to give up any losing battles in advance. If a classmate so much as scratched him, his mother would move earth, sea, sky and concrete to come into his large Jesuit school like a fury.  Mocked by his peers, he would run and hide during each of these visits, that deep within himself he actually truly wanted. He would try in vain to burrow under the first post he found, making himself small, hoping that the earth would open under his feet and swallow him up, but he remained visible to his mother’s eyes. She walked across the big courtyard, got down on his level, kneeling with open arms. Frozen for a moment, they stared at each other before the son threw himself into her arms. Because of being embraced everywhere, the son was eroded little by little, his features giving way to maternal love. The first time that I saw him, he had no eyes, nose or mouth. I didn’t find this questionable at all. To be faceless seemed beneficial to me, and more effective than all my attempts to tumble into invisibility. I would have liked to know how to find something that I could trade for his peace of mind.

My country also had this same foresight and stopped resisting the Syrian takeover, out of fear of losing its very last bit of selfhood. Because of Turkish-Syrian-Israeli-American-French-Palestinian-UN invasions, my country—infantilized by its history of being put under these various forms of guardianship—suffered from an overlay of identities, that it wore like an orphan throwing herself into the void, indiscriminately. Under these invaders, it had a hard time forming an image representative of all its minorities. Without them, the cacophony proved even worse. Arab identity. Phoenician. Modern Lebanese. Syrian-Lebanese. Incapable of forming a collective history without sinking into disharmony, divested of its image of itself at the least sign of friction, Lebanon was always on the lookout for a saviour who could give it a less brittle cohesiveness than its overload of affect, adoption, protectorate. It was ready for anything, so long as people still showed an interest in it. Even an invasion seemed providential. It posed as the victim of that which seems vital to its balance. From Lebanon’s point of view, Syria never stopped invading it. From the Syrian point of view, Lebanon never stopped letting itself be invaded. Consistently exposed to others’ schemes, infantilized then trained into dependence, this “child-country” suffered from the denial of its selfhood, passing from one father to another.

[M]y country—infantilized by its history of being put under these various forms of guardianship—suffered from an overlay of identities, that it wore like an orphan throwing herself into the void, indiscriminately.
In the blur of their rarely articulated suffering, my husband and my country joined together. Their shame at growing up without a face—to no longer remember it—is only equalled by their kindness. The more they lost their features, the kinder they were with their classmates, the more obedient with their masters, the more obsequious with their neighbours. Searching for the backing of someone stronger, bigger, more of a mother, more of a father, more of a protector, Lebanon little by little was shrouded in the emotional reflexes of the colonized person who is devoted to his own self-negation.

“A bunch of incompetents, that’s what we are,” my mother said watching the eight o’clock news. She lamented that the country was being led by “morons, good for-nothing, pathetic, losers. Nothing but scum”. Both nouns and adjectives spurted out.

Fadia lamented that the country’s national image was so low. “Because we are constantly berating each other we end up believing it. My father has treated the neighbour’s son, who belongs to an opposing party, like such rubbish that in the end he resembles a paralyzed, stammering receptacle. The son lies around our building’s courtyard for days on end, sitting on a chair without moving. He’s even afraid to think. When he does speak, he stumbles over every word. My father takes advantage of this to lay into him. Sometimes, the son pisses his pants. He’s just like this country. By stumbling so many times, it puts itself at the mercy of greed and invasions. This country isn’t too young, it’s prone to crumbling.” Then she fell silent.

Edward’s Sunday shortbread also crumbled at the least touch. The ingredients don’t stick together well, he explained cursing the mediocre quality of products from the corner grocery. “What recipes need is some kind of binding agent,” Edward said, mixing his cake dough. No binding agent would be able to overcome the difficult cohesion of the minority groups making up the pluralism of this country. Otherwise, there are just sowers of discord who claim to be saviours. In history class, Fadia explained to me, “In politics, as in life, you aren’t ever saved but rather indebted.” Lebanon paid its debt. In looking to be saved, it perpetuated the servitude against which it measured its powerlessness, weapons in hand. Its instability allowed predators, clothed in benevolence, to swallow it like a boa constrictor swallows its prey after having paralyzed it. Divide to better rule. Neutralize the desired object before devouring it. The predators waited for the country to call on them before taking it in one mouthful. The feast of saviours.

“And the endless circles turned and turned, and the young men turned into grey men.” Story of the Week (March 17), by Alzo David-West.

The fan is rotating now in my head Allen / And my mouth that looks like a newsstand / Is...