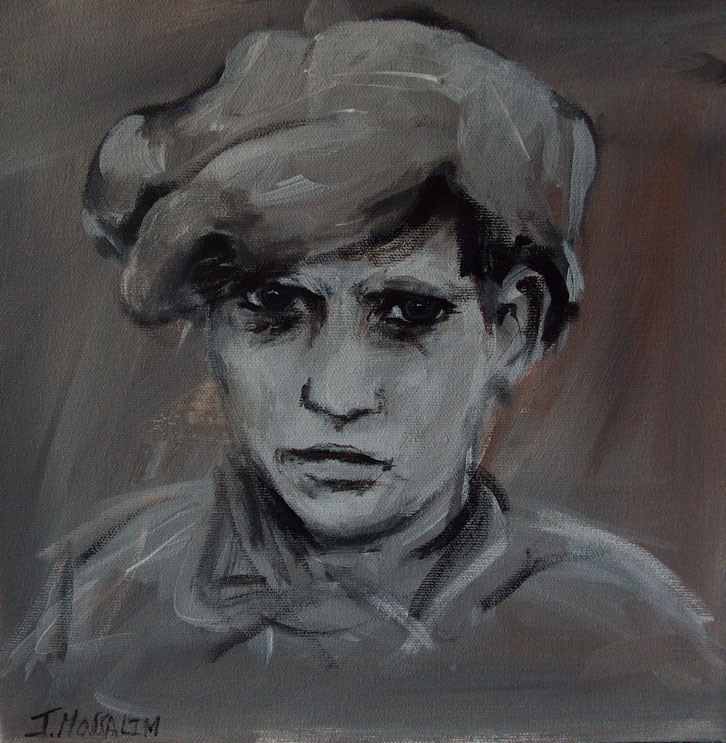 This is the second time I’ve become a writer because I’ve already been a writer once. That time I wrote the first Cemetery Book. Today I’ve become a writer again because it’s raining, and when it’s raining I can’t collect cardboard, because it’s raining. But the most important thing is that my handcart is in the workshop, because my rear-view mirror has been broken off, and I don’t know how to fix it because you need special tools or whatever to fix it and I can’t do that, because I haven’t got them. My rear-view mirror has never ever been broken off before, though I’ve had my handcart for twenty-eight years, because I’m hard-working and people respect me for being hard-working.

The workshop is on the Island and it’s got special tools. The man who fixes things with his special tools is called Ján Boš-Mojš and the funny thing about him is that every time he says his name, Ján Boš-Mojš, he doesn’t say it, he sort of sings it like this: Ján Boš-Mojš. He sings his name to a sort of Ján Boš-Mojš tune. But apart from that he is hardworking and people respect him, because he has a son who is very ill with elypsy, and Ján Boš-Mojš has to look after him because elypsy is the sort of illness where you have to be looked after.

I’ve got lots of first names in my Christian Names Notebook. Mostly they’re Peters. I’ve got thirty-one Peters, except that one of them writes his name like this: Petr and that’s the Czech way of writing it but I’ve got him down as Peter anyway because he’s not a Czech, he’s a Hungarian. The thing is, when he was born, the person in charge of writing people’s names in the Documents left out the second E, but that was when we still had Czechoslovakia so it was OK to write it that way: Petr, but it’s not OK to write it like that now, and he’d be in big trouble for that, because in proper Slovak you have to write it like this: Peter. Or else change it.

Because that’s the law.

The reason why it’s hard to be a writer is because it makes your hand hurt.
The best time to be a writer is when it’s raining because that’s when I can’t collect cardboard anyway because that’s when that idiot Krkan from Recycling won’t take it, because he says it’s wet, but he will take it from other people even when it’s wet, that idiot Krkan. He takes it from other people like that Gypsy rat-woman Angelika Édesová, and he takes it from her even if hers is wet. But I know what’s going on. What’s going on is that when that rat-woman Angelika Édesová comes in, he puts up a note saying ‘Back soon’, but he’s never back soon, because he locks himself in the Recycling Office with that rat-woman Angelika Édesová and does sexual things with her. That’s why he takes it from her even when it’s wet and he won’t take it from me when it’s wet, but that’s his problem. He’ll see. He’ll get reported and he’ll be in big trouble for that. But I don’t care, because I’m hard-working and I can always find something to do, for example now I’m a writer.

The reason why it’s hard to be a writer is because it makes your hand hurt. Except that I have to be a writer because when I had my fortune told it said:

It was old Gusto Rúhe who told my fortune and what he said was this: ‘Will write the Cemetery Book.’ But he is an alcoholic because he lives on alcohol and he smells really awful, because he often wets himself.

He’s always sitting in front of the Pub by the Railway Station and he urinates into the Floral Display, and when he tells fortunes he spits, burps and slurps all over the place because he thinks that’s the law for fortune telling.

He tells fortunes due to a Moonstone.

Moonstone is a kind of stone that’s yellow and almost transparent, because you can see right through it. Its name is Moonstone. I haven’t got it down in my Surnames Notebook because it’s a stone and I don’t even know if that’s its real name, or if old Gusto Rúhe just made it up. It’s cold when you touch it. When you’re having your fortune told you have to hold the Moonstone until it gets all warmed up. And then, when it’s warmed up so that it’s all warm, you give it back to old Gusto Rúhe. And when he’s done with all his burping and whatever, he writes your fortune on the tarmac with a piece of chalk like they have at school. This is what he wrote for me:

“Mist soars on the river, my door splits free of its hinges:/ My children’s children, and those I will never see —/ Generations swarm in me,/ Born to this North American soil, dreamers in a new world…” By Meena Alexander.

The Siren of the Seaside City: An Interview with Zoe Viccaji

Singer/songwriter Zoe Viccaji talks to contributing editor Asmara Ahmed Malik about the life of a performer, and what Karachi gave...