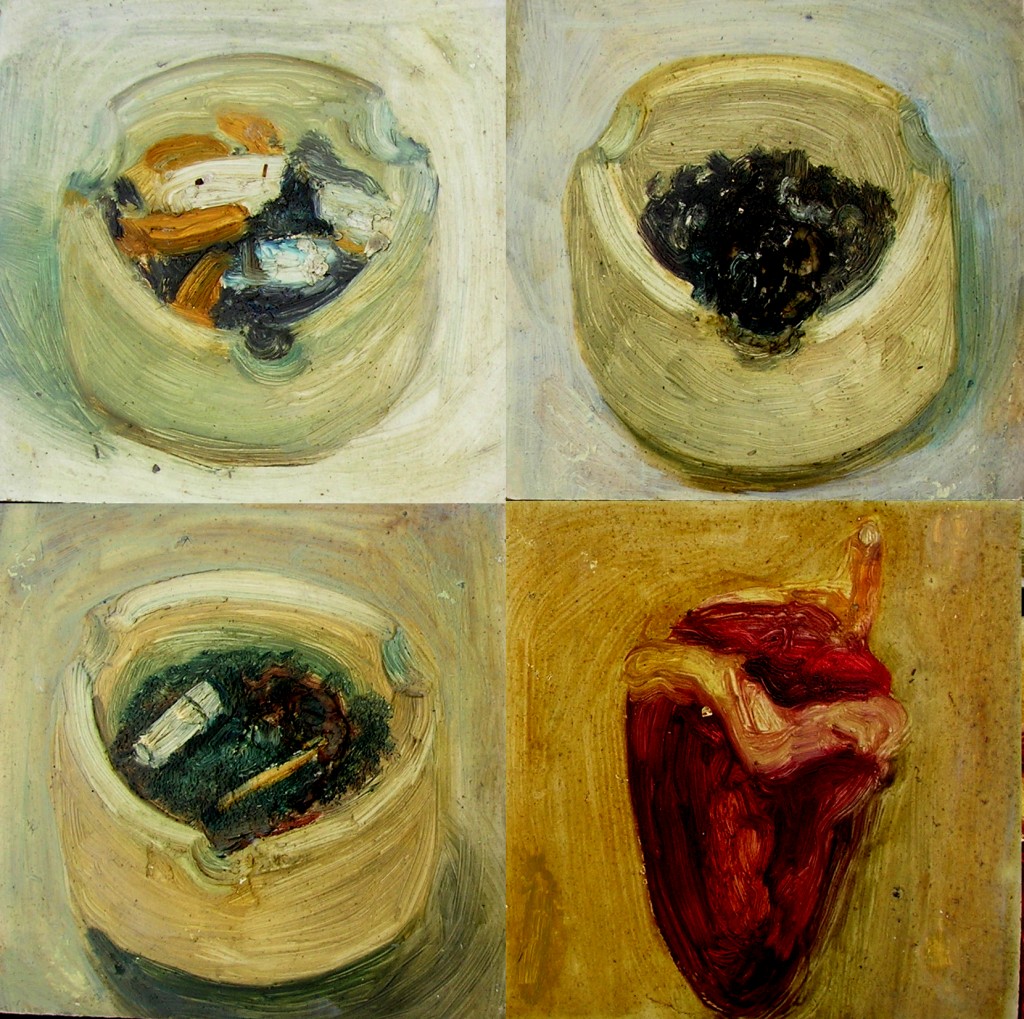 A yellow butterfly fluttered around the red ribbon buried in her gray hair. Taking the little bucket from my hands, Miss Priska emptied the coffee dregs onto the ground next to the tree. I watched the earth absorb the remnants of our morning Turkish coffee.  The butterfly performed an elegant maneuver to taste the wet, coffee-flavored soil. “I hope it won’t give it a heart attack,” I said but the old lady just waved it away, sending a stream of water from her hose onto the gnarled apricot tree. It must have been in our courtyard for at least a century.  Miss Priska was seventy-four, with a gorgeous shock of silvery hair. She lived alone in a first floor apartment with a little garden, surrounded by an enormous brick wall. In spite of her seventy-four years she was out there every day tending her fringed Dutch tulips, purple irises and sugar-puff-like pink hydrangeas. “Coffee and Elvis, there’s nothing better to give a girl a lift,” she said, slowly walking over to her apartment to turn up the record player. The tree’s branches swayed in the draft generated by ‘I Got a Woman’.  Miss Priska was an Elvis Presley fan.  An aged Elvis Presley fan, to be precise.  If it hadn’t been for her wrinkled face and white hair I would have thought this was a crazed girl in a fifties polka-dot dress from Christian Dior. She listened to the King of Rock every day, humming to the flowers in her husky voice on long summer afternoons. Her apartment was crammed with the looniest assortment of trinkets bearing Elvis’s likeness: sugar bowls, glasses, doilies, statuettes and plates; she even owned a toothbrush adorned with his portrait. That she never used.  Displayed in a goblet behind glass it looked as if Elvis had only just finished brushing his teeth. “He’s a kindred soul,” she would say, knowingly caressing a wall hanging showing a life-sized Elvis microphone in hand. “We might have met if it hadn’t been for the Pond, but who would have wanted to cross the Atlantic?” she added with a gesture indicating she wasn’t going soft in the head.

Miss Priska was the oldest resident on our block.  The only thing possibly older than her was the fruit tree that she looked after affectionately. She was lonely.  Over the years she had lost her siblings and most of her friends had been pushing up daisies for a quite a while. She knew the history of every apartment around the courtyard. She remembered old gossip and long-forgotten love triangles. “The only ones left are me and her,” she said, pointing toward the old tree with a chin that made her look like a storybook picture of an old witch.  The apricot tree had borne no fruit for years. That didn’t stop Miss Priska from tending to it with touching care. She would prune it, hoe around it, and treat it with fertilizer. She kept looking for new recipes guaranteed to give the tree a new lease on life so that she could taste its wondrously delicious fruit once again. “You wouldn’t understand unless you’d tasted it. It’s a rare variety. A Turkish pasha brought it straight from Istanbul as a gift for Miss Eržika! Eržika had lived on the third floor and the Turk fell madly in love with her after they met at a health resort. Now they’re both long gone, you see? But the apricot tree is still here!”

Miss Priska was the oldest resident on our block.  The only thing possibly older than her was the fruit tree that she looked after affectionately.
Miss Priska looked after the tree throughout that strange summer, during which heat waves alternated with sudden downpours making the grass grow faster than she could mow it. The garden turned into an exotic jungle, with shoulder-high grass and pink hydrangeas resembling street lamps lit in the middle of the day.  That July morning I came to see Miss Priska with my usual offering of morning coffee remains. I ran down the two flights of stairs barefoot, carrying a whole week’s supply, which was beginning to ferment at the bottom of the little plastic bucket.  “I won’t be needing the coffee any more,” Miss Priska announced, bursting with joy. Her voice was trembling. The sparks flying from her eyes nearly scorched my bare feet.  She stood there pointing to the apricot tree, as if to introduce it or induct it into the Hall of Fame. “Time to start making preserves!” she exclaimed triumphantly and handed me a yellow and red fruit. “Have a taste,” she said, jabbing me as I glanced from my hand to the tree and back in astonishment. The tree was groaning under the weight of multitude of fruit on its branches.  The ground around it was strewn with fallen fruit, which must have been pullulating with worms. “I can’t believe this,” I gasped, biting into the soft apricot flesh.  As I swallowed, my tongue was saturated with the sweet juice. “What does it taste like? Tell me!” Miss Priska shrieked euphorically.  “It tastes like, like…. pineapple dusted with vanilla?” Flabbergasted, I tried to find words to describe the unusual taste. “Bingo!“ she shouted and briskly walked into her apartment to put on her favorite record. Elvis’s deep voice bounded over the garden wall, the wailing guitar sending a cat scuttling away. “‘Blue Suede Shoes’ always makes my blood race – here, go and get me twenty pounds of sugar,” Priska ordered, pressing money into my hands. Before I left the old lady began to dance: it was something vaguely resembling rock’n’roll.

Following on from the success of our inaugural fiction creative writing workshops in Islamabad, helmed by The Missing Slate Editor-in-Chief, we're...