Of the movies released by Marvel to date, I would choose the first Iron Man and The Amazing Spider-Man for my personal favorites, as I was not a big fan of The Avengers at all and other releases since have mostly been action without much character or story to back it up. Having said that, Captain America: The Winter Soldier is a return to form for the Marvel franchise and sets the bar pretty high for upcoming releases. It’s a solid super-hero adventure flick, wowing us in the places it should wow us, and never really teetering so far over the edge of campiness that it loses all credibility. 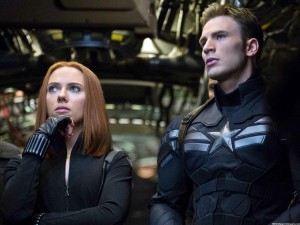 Chris Evans is back as the title character, this time working more closely with Black Widow, played with graceful poise by the immaculate Scarlett Johansson. There is apparently a nagging interest in getting good ole Cap a girlfriend, as Natasha (Black Widow) is constantly suggesting date candidates for him, while it seems she really wishes he would just ask her. It’s an odd romantic dynamic that thankfully is not over-explored through the course of the movie but rather just hinted at, which I think was the right call by the writers. This element just gives the audience a little taste of humanity to attribute to these characters, so we care about them at least a smidgen as they are put in insanely impossible situation after impossible situation. It’s not easy to forget that Captain America is a super-human after all. We need to be reminded that he also has a heart.

This movie has loads of frenetically paced action, with some incredibly well-choreographed fight sequences resembling the Bourne trilogy on crack, and the finale is a well-constructed set-piece involving an explosion extravaganza of flying aircraft carriers crashing into buildings. ‘Merica!! I enjoyed the espionage-heavy plot of this one as well, though certain aspects of it didn’t seem to mesh too well with the action as it was portrayed. Some might call this clashing of elements versions of a plot hole, but I see them more as speed bumps in the suspension of disbelief one must assume to enjoy a movie like this. For instance, you’re not going to like the movie very much if every time someone shoots at the main character you wonder why they don’t just shoot his legs instead of his shield. Or if when a group of characters escapes from S.H.I.E.L.D., who are able to track people so well they find them no matter where they go, how they possibly get more than three blocks without being captured again. These are not questions to ask while watching this movie.

Another question that DID bug me though: why not call another super hero friend for help in a possible world ending situation? Marvel has already established that S.H.I.E.L.D. set up the Avengers Initiative. Captain America is intricately involved with S.H.I.E.L.D., so in a scenario that possibly threatens the entire world, with millions of lives at stake, they’re just gonna let Captain America handle it with a couple of his human friends? Could he not just give Tony Stark or Bruce Banner a call and say, “Hey, you may want to help me out on this one.” Nah, why risk that, it’s easier to choreograph fight scenes if they only fight one at a time.

Despite my cynicism, this is a fun movie to watch. Don’t take it too seriously and enjoy the ride. The villain is ferociously cool and there are some good plot twists. There are also some neat Easter eggs for nerds throughout that also make it enjoyable. My favorite was a shot of a gravestone toward the end. If you’re a Pulp Fiction fan you’ll get a kick out of it. And of course, stay after the credits for a hokey lead in to the next Avenger installment. It’s very reminiscent of classic serials. Try to restrain your nerd-gasms.

Bermuda face Uganda in the third match of our Poetry World Cup.

"The morning was new/ and these were morning thoughts./ The villages reduced to the howling of dogs/ belonged to the...