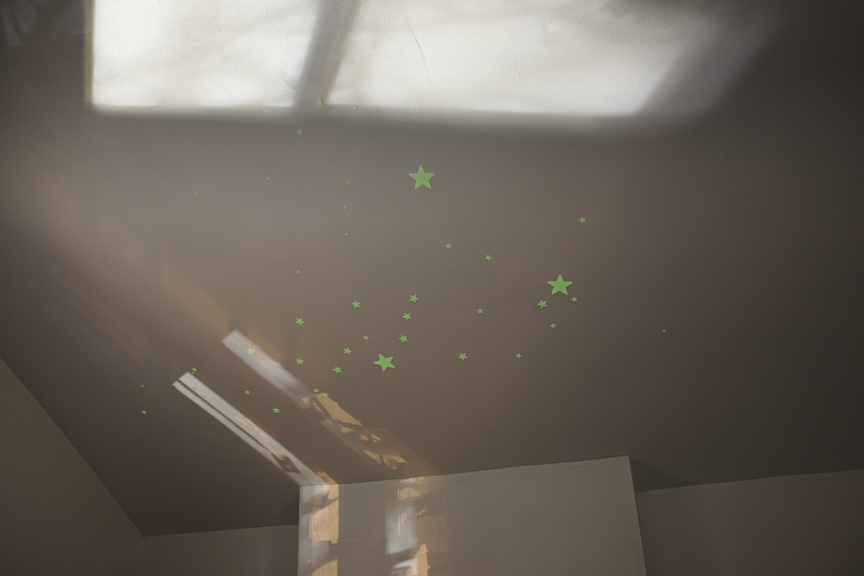 Photography by the author.

We were chasing after him again. It wasn’t even midnight and Nasir was grabbing the car keys, taking a pair of gym shorts from the running dryer, and forcing his legs into them. He stood on the welcome mat just outside the doorway; the cleats of his soccer shoes had long ago torn the O’s from the H-me. He shivered. Chest hairs tugged goose bumps out of his skin as his phone illuminated the side of his face. Nasir’s eyes watered. It was Ed’s voicemail, again—“Hi. This is Ed the Witch Doctor. I’m not in right now, but leave a brief message, and I’ll summon you later.”

Did Nasir notice right then, how long I took to put my clothes on? Did he notice how I lingered underneath the staircase, next to the dryer, the clothes inside thumping against its sides. The metal of the lid was warm. Nasir was dialing Ed again. I knew that with just the right words I could keep Nasir here with me. We wouldn’t go chasing after Ed. With the right combination of words and gesture, I could make this lovely man close the door, gather me in his arms, and go back to bed with my body. The palm trees outside knocked their heads against the stucco walls of Nasir’s house. “Hi. This is—” I watched Nasir standing there in the doorway, waited for him to look at me, to send me the message, that yes he loved me, too.

“Where are you? Tell me, where are you?” Nasir asked. His thick eyebrows were halfway up his forehead, the skin around his eyes taut in an effort to listen clearly to Ed, hopeful that in the silent spaces between his words he would hear waves crashing, a hint as to where Ed was. Nasir’s eyes were shiny marbles. He asked him, again, “Ed, Tell me. Where are you?” There was exhaustion in Nasir’s accent—this wasn’t the first time Ed had tried him like this.

I stared over the Hurricane Andrew news clippings encased in a gilded Oriental frame next to the doorway. The LSD was now in my body, in my brain, latching onto some neurons; I couldn’t keep a still image of my face over the headlines that enumerated fatalities, and the sight of trailer homes destroyed; my face looked a little like Nasir’s and then a little bit like Ed’s, and then like my own, but before I could love any face reflected on the clippings it would change into another moving image.

The chemical taste of the acid tab seeped all over my mouth, groundwater mixing with the raw fish that rested heavy and fatty over my tongue. “I love you,” Ed said as his mouth opened around a piece of spicy tuna. “Both of you.” He rested his chopsticks next to the remote control and we continued to watch anime in the living room of Nasir’s house. The thought of sharing this same metallic taste with Ed brought me closer to him, his head reclined on my lap, his hair, so thick and long, weaving into the fabric of my boxers. Nasir looked straight ahead, playing with Ed’s feet.

The wind slammed the driver’s door shut behind Nasir. His Where are you’s and his Tell me’s sounded sadder trapped inside the small red car. “Where are you? Hey? Are you at your house? What? I can’t hear you.” I pulled the black lever on the side of the seat. Reclined all the way back. The streetlights were caught on Nasir’s balding head. His head became brighter and more like a sun as we got onto the I-75 ramp.

The car shot into the sky in a spiral, rising five stories over the Everglades, over the blades of the swamp illuminated only by fireflies in the moonless night. An overwhelming sensation of vastness, of distance, filled me: how was it that Nasir felt so far from me when just a leather gearshift and a soggy cup of soda separated us? What was this small distance compared to what separated us from Ed, from the marshes curling deep into the horizon outside my window, and to our left all the fenced off backyards, townhouses, and artificial lakes spewing water into the thick moistness of the South Florida night? I tried closing my eyes; to let the acid drive me inside to some space I had forgotten, a region of myself where the moon didn’t rise.

Author of the Month: Madeleine Lee

"We feel obligated to hide ourselves, and in general, we're just plain cruel to each other." Madeleine Lee, our Author...