An average on-screen treatment of South Korean high-school life tends to be as monotonous and perfunctory as the students’ drab uniforms and prescribed daily routine. The bulk of adolescent dramas set in Korean schools incorporate an outsider’s or teacher’s perspective to examine students’ behavior and strive to provide insights on the impact of the nation’s educational system on its youth. Such quasi-sociological observations are exactly what audiences expect to see, with teenage characters embodying certain types subjected to the preordained forces of certain story patterns. Any event should have its corresponding cause; a delinquent protagonist comes from a broken home, a suicidal one has bullies badgering her or an overbearing parent — usually a mother — imposing unrealistic expectations on her. These stories are supposed to reveal the dual role of institutions, family and school as both the most reliable shelter and a breeding ground for post-pubescent nightmares. But only a handful of them delve deeply into classroom status hierarchy as the main subject-matter, without drawing exclusively on typified student characters. Indeed, few Korean coming-of-age movies that tackle this subject-matter are as structurally ambitious and perceptive in characterisation as Yoon Sung-hyun’s Bleak Night. 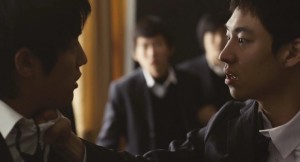 Conceived initially as a graduation project, Yoon’s debut feature ended up pulling in over 20,000 admissions nationwide, a number in Korean independent cinema equivalent to 2 million in its mainstream counterpart. The movie also catapulted into the limelight its leading star Lee Je-hoon, who subsequently toplined one of the country’s highest-grossing romantic dramas, Architecture 101. In Bleak Night, Lee plays Ki-tae, whose suicide is at the heart of this ostensible mystery narrative. As Ki-tae’s father interviews his son’s former friends, multiple perspectives feature in shaping the narrative’s contours and uncovering what really happened. The first few flashbacks — showing Ki-tae alternately as a sadistic bully and a good best friend — might throw the audience off a little, since it’s not clear whose point-of-view these scenes are told from. But once the list of suspects (!) narrows down to two boys, Hee-joon and Dong-yoon, it begins to seem as if we are finally getting to the truth.

But the truth is, there really is no such thing as complete, satisfactory truth — especially when it’s at best a fragmented picture of puzzle pieces, which are far from complete in themselves. The presence of a deceased friend’s father may get the boys to talk, but all they do, out of fear or possibly guilt, is sidestep accusations and shift the blame. They deny ever having been close to Ki-tae, or claim the other boys knew him better. Hee-joon, once one of Ki-tae’s closest buddies and then the major victim of his bullying, is no exception. But from the outset Yoon establishes that neither Ki-tae nor his so-called friends are entirely innocent or culpable; the more information the director supplies about their relationships, the clearer it becomes that the line between the two is frustratingly thin.

When Hee-joon recalls his days spent with Ki-tae, Yoon’s camera captures up-close all the joviality and laughter shared by the boys, then gradually settles into rigid, static compositions as a gulf develops between them, and soon becomes unbridgeable. Exactly what creates this rift is simply irreducible to a single cause. It could be that a girl Hee-joon has a crush on actually likes Ki-tae so Hee-joon gets jealous; that Ki-tae is constantly irritated by Hee-joon’s evasiveness and acts out his frustration by beating up his best friend; or that Hee-joon hates the way Ki-tae intimidates him but pretends they are friends because he has no choice. Even while Hee-joon’s recollections unfold, the reasons for Ki-tae’s death are hardly ever spelled out, since the boys speak and express themselves in a register that adults, characters or spectators, find nearly impenetrable.

But Yoon understands their language perfectly, and knows how to effectively convert it into a cinematic one. One minute the boys communicate well enough without saying much except curse words, then the next, they are total strangers. The camera’s fluid shifts between the friends’ faces grind to a halt when they position themselves right opposite each other, all but completely disconnected. When Hee-joon tells Ki-tae face to face that he’s transferring to another school because of the latter, and that others only stay friends with him for fear of being bullied, the words obviously hurt Ki-tae. But it hurts Ki-tae irreparably when Dong-yoon shuts him out permanently after, in addition to Ki-tae’s bullying behavior, Hee-joon’s departure further sours their friendship and Ki-tae deliberately sabotages Dong-yoon’s relationship with his girlfriend.

Despite being apparent causes of Ki-tae’s suicide, those broken friendships are not the single contributing factor. Each repeat viewing of the movie would find the audience empathising with each different character in a different way. Ki-tae may be the bully, but in his most honest moment with Dong-yoon, he admits that he likes to exert his power since it makes him the centre of attention. While it doesn’t justify his violence against Hee-joon, Ki-tae knows no other way to express himself when all he wants to do is get Hee-joon to open up to him.

Yoon refrains from adopting a psychoanalysing or sociologising omniscient perspective to probe the boys’ subtly but abruptly changing relations. His subjective, mostly microscopic glimpses into their high school lives are realistic and attentive to detail, while not excluding the social dimension of the story. By surrounding the boys in the dismal landscapes of non-descript apartment and school buildings, the filmmaker reminds viewers, especially Korean ones, of their own ambivalent feelings about their largely dreary but occasionally joyous high school experience — entrenched in the seemingly endless home-school-private tutoring (“hagwon”) cycle — and of their socially inept, impulsive, hardly innocent but hardly grown-up adolescent selves.

"I think of my own mother/ folded tight into/ her warm dark bed/ of Mississippi Delta clay." Weekend poem (May...