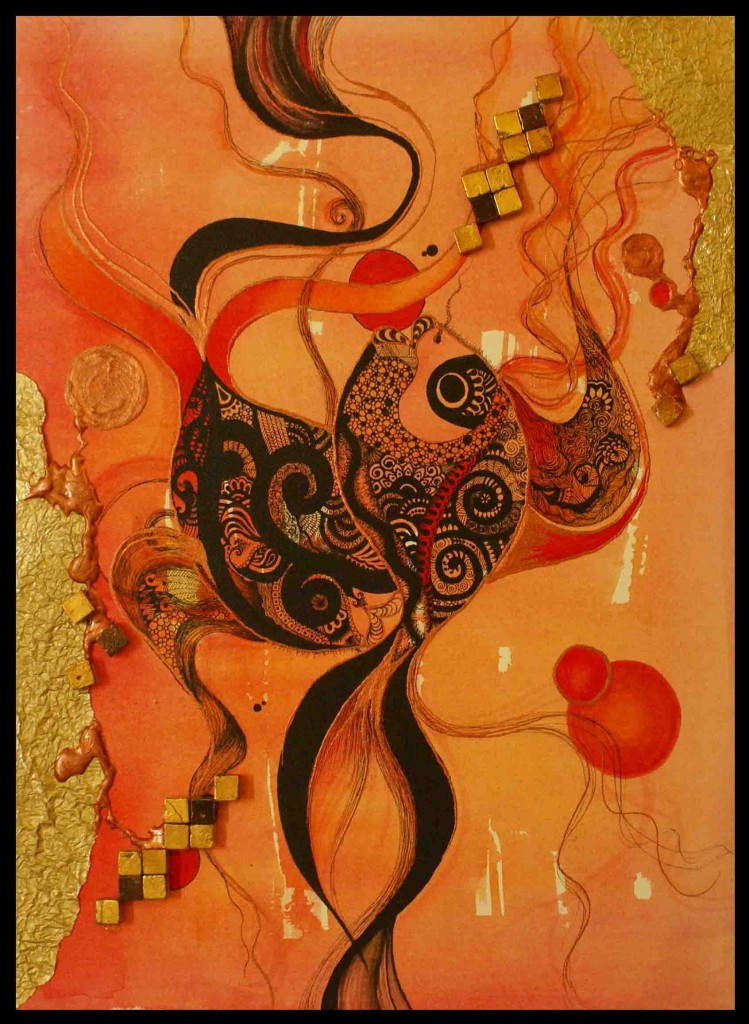 The Antagonist Dreams, by Faizaan Ahab

Translated from Arabic by Mohammed Albakry

You could barely view the sea under the night’s darkness and heavy rain. Cars would careen around the road uncontrollably because their drivers were too drunk. Accidents were frequent and the police always arrived late and asked the same question to the inquisitive crowd who gather around the accident scene: “Was the driver drunk?” The ambulance would often come even later, and then, finally, the crowd would disperse. Sometimes, one of the nosy bystanders might receive a kick or a punch, or get shoved inside the Jeep by the police, but after he paid a fine, he would then be thrown back out in the middle of the road.

You could hear the strong roar of the sea, but the sound of thunder was even stronger. The rain added to the noise as it fell on the surface of the cars parked next to the pubs and hotels.

Blaring music was coming from the “Oklahoma” nightclub. Close to the nightclub was a pub where groups of people would come in and out constantly. Loud groups would stagger out from the pub every night and often get into fights with other groups; whether with fists or sharp razors. Often a female victim would be left bleeding on the sidewalk and people who had nothing to do with the incident would gather around her. When the police arrived, the ones who remained could not even vaguely bear witness to what happened. Then the police would usually say, “That’s the fate of prostitutes. They bleed on the sidewalk as much as they bleed men of money.”

Now the sea was rumbling in the thick darkness, and rain was falling less intensely. Suaad dashed out from the narrow “Oklahoma’s” door and the sharp sound of the door bolt followed. She tried to tighten her coat belt and moved a little forward to the small round plaza surrounded by large mud vases. Then Said came out talking with the well-dressed doorman who seemed to know him well.

“You are drunk tonight; will you be able to drive?” the doorman asked.

“I didn’t drink enough! That prostitute out there drank the whole bottle and of course she’ll pay for that.”

“Are you going to do it again tonight? Be reasonable, Said.”

“I’ll do it all nights! I’m King Schahriar.”

Then he laughed and stuffed a ten-dirham note into the reluctant doorman’s hand.

“We are friends, why waste your money?” The doorman asked.

Said expressed his impatience while looking at Suaad, who looked tired standing in the small round plaza. He put his arm around her shoulder and pulled her towards him.

“The car is over there.”

“Where are we going?”

“Wherever your heart desires. There are still other places open. Tonight is our night.”

After they stumbled into the car, she pulled a cigarette stuffed with hash out of her handbag and started to turn it in her fingers.

“Said, let’s drop by to see a friend of mine. Poor woman, I’m sure she doesn’t have anything to smoke tonight.”

“And why doesn’t she? There are many dealers selling hash on the Corniche promenade.”

“Poor thing, if she doesn’t get it, she will die or commit suicide. She is a close friend of mine, but she has many problems with her stepfather and with her boyfriend. She has a beautiful baby girl, but her boyfriend doesn’t want to acknowledge the baby. He is from a rich and powerful family, you know?”

There is something else about you, maybe something you yourself don’t know… few are the people who know themselves.
“I don’t like them, but I like to live.” She said that with a lazy tone in her voice while he was driving through the empty streets separating the villas from each other, elegant villas with gardens illuminated with various colored lights. She lifted her hash cigarette almost with closed eyes and asked him, “Do you smoke?”

He picked the cigarette from her to take a puff and gave it back to her.

“And now what do you say? Where is my girlfriend?” She teased him.

“I don’t know, maybe she is somewhere in this world.”

“I don’t love anyone. I used to love Almutii, but I left him, because he didn’t have money.  He used to steal my money to buy drugs. If he didn’t get the money, he’d go mad and threaten to kill me. We went to high school together, but we were kicked out. His father tried to kill his mother many times, you know. I don’t know his father, but he told me about him. No doubt, like father, like son, and if I married him, he’d try to kill me too. But I don’t want to die. I love life.”

The music was loud inside the car, which was moving very slowly. The windows were closed. It was rainy and cold outside and the car became like a closed box, suffocating with the hash smoke. But Said did not want to open the window. In the meantime, a large motorcycle raced in front of them causing Said to tremble a bit. With his hand, he wiped the front windshield.

“I wish I had a big motorcycle like that one,” Suaad said.

“So that when you get stoned, you’d mow down all the trees on the road in front of you?”

“Ha, ha, don’t exaggerate. All those who own motorcycles of this kind smoke hash.”

They passed the villas area and the city looked calm after the rain. Some puddles formed by rain were glittering under the night’s lights. From time to time, some night patrols would cross slowly with their lights off and stop next to the sidewalk searching for vagrants. Suaad was feeling warm inside her coat, leaning her head back and feeling relaxed. Her eyes were closed and she could hardly open them. She mumbled something and Said understood that she wanted something to eat. He was also feeling hungry. Usually after a night like this, he wouldn’t eat and sometimes would even sleep with his clothes and shoes on.

“Are you hungry?” he asked.

“Let’s go and have Harira soup.”

“Harira is sour and the humus and lentil in it taste like stones.”

“Hash gives you an appetite, doesn’t it?”

“Yes, once I ate a huge pot of couscous that big all by myself,” she indicated with her hands.

“I swear with my honor.”

“Do you have honor, you…” he paused abruptly

“Say it; let it come out of your mouth. For the record, I have more honor than the daughters of those villa owners. I know them; we smoke hash a lot together.”

“All right, it doesn’t matter. So you don’t want to eat Harira?”

“No, I would rather eat kufta hamburger with eggs and sauce. It’s cheap at the Tanjawi restaurant that is close to Cincinnati Beverages.”

“But it gets busy there and often at the end of the night fights between the drunk men erupt over girls. The police patrols also go there and check for ID’s. Do you have an ID with you sweetheart?”

“Do you think I came from another planet or something? I’m Moroccan too and I have a father and mother like the rest of the people. Do you despise me because you picked me up easy? If I didn’t like you, I wouldn’t go out with you. I can smell men’s type, you know. Do not think that I just liked your suit and tie. No, there is something else about you, maybe something you yourself don’t know. You know, few are the people who know themselves.”

Features Editor Sana Hussain writes of Pakistan’s arguably most controversial writer in Urdu and how the troubled writer coped with 1947’s partition from India.

Venezuela and the US start the second round of our Poetry World Cup.