Versatility and naturalism are perhaps the words most frequently used to summarise Richard Linklater’s achievements. He has indeed worked across diverse genres and subjects, and he’s known for his seemingly unstudied dialog and unassuming portrayals of people. What often goes unmentioned is that in film after film, he also strives for a broad sense of balance and unity. For him, characterisations are largely about assembling different personalities, desires and interests and creating dynamics among them; realism isn’t about recording the world as it is, but representing people’s real-world interactions through formal artifice. The Texan native has constantly experimented with ways to present his stories. 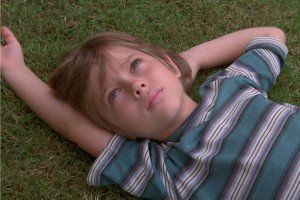 Take his first commercial effort Slacker, an instant phenomenon when screened at Sundance in 1991, which flaunted a baton relay-like narrative. A decade later in Waking Life, another Sundance entry of his, he had live-action scenes overlaid with animation to lend it an unsettling, dreamy look. Among his more recent features is Bernie, a retelling of a small town murder wherein he shrewdly blended interviews with actual locals into a wholly re-imagined portrayal of the murderer-victim relationship. Also listed on his resume are: a high-school comedy, an adaptation of a single-set play, another rotoscoped movie, and a Jack Black-led blockbuster comedy.

Linklater’s 7th Sundance outing, Before Midnight, opened last year to rave reviews, concluding his much-celebrated romance trilogy. By spacing out each installment nine years apart, he managed to mirror the actors’ own aging and personal views on myriad issues in this otherwise very fictional love affair. Most remarkable about this series is how the time gaps in between hardly feel empty, even though absolutely nothing happened — that is, onscreen — during those long breaks. By the time Before Midnight came out, it seemed the couple’s Viennese encounter became history, yet here the now 40-somethings with twins alternately bring up the past, bicker over present problems, and envisage their future together. This final part was devised so as to prompt audiences to interpolate and picture the pair’s 18-year coexistence as one continuous flow of time.

Linklater’s career-long fascination with perceptions of time further manifests itself in Boyhood, his latest pet project with grand ambitions. Its 12-year time frame — within which the growth of a boy named Mason (Ellar Coltrane) is chronicled — deliberately matches the 12-grade span of American public education. With the entire cast actually maturing throughout the process, the movie effortlessly compresses time and captures the effects such a lapse of time has on the characters’ lives. To vividly depict all this, a pseudo-documentary strategy — which becomes increasingly trite as a means of naturalistic representation of subject-matter — would have been a tempting option, with shaky camera work, grainy textures, and very possibly a few home video-ish images thrown in between.

Linklater is however smart enough to resist the usual trappings of the so-called vérité style. Growing up, Mason and his sister Samantha (Lorelei Linklater; the director’s own daughter) undergo various changes and transitions, by turns welcome and unwanted, and exhibit natural reactions accordingly. Rarely are there melodramatic outbursts and scenes that are overwrought. But simultaneously, audiences are reminded now and then that this is, after all, a work of fiction. The filmmaker plotted it out beforehand and shot footage each year with the end product in mind.

At times, artifice betrays itself: however seamlessly and subtly edited together, the narrative’s divided into sections aligned with quintessential moments of the boy’s adolescence, and each section contains some prominent cultural signs such as Harry Potter. Also, while communication between the characters bears no hint of theatrics, every scene was meticulously scripted and acted out thus. Most of the time, the family dynamics were realistically drawn, yet Mason’s relationships with his two fathers appear schematic, particularly in the juxtaposition of the scenes comparing how each father treats him as well as the scenes of the stepfather degrading into a violent drunk. Despite its contrived premise and naturalistic tendencies, Boyhood doesn’t want to be a documentary but stands as an organic fiction comprised of discrete annual chapters. It was all a conscious decision on Linklater’s part to employ the same cast, the same equipment, and the same process to give the outcome a consistent look.

Linklater also demonstrates his ingenuity as a storyteller by making this about the other family members as much as it is about Mason. Had the footage been organised in another way, it could easily have been entitled Girlhood or Parenthood. In the movie, the mother Olivia in particular goes through levels of transformation as varying as her children’s, all the while juggling work, school, and parenting. Her struggles are genuinely felt because Patricia Arquette incorporated into her performance her own experiences as a single mother and a woman transitioning from her 30s to 40s. Still, self-sacrifice and unconditional love are not Olivia’s defining traits. She is never simplistic and far from perfect; she pursues her aspirations while making bad relationship choices, which affect her children. At one point, it seems she’s unfairly deemed an uncool mom (as opposed to the fun Disneyland dad, played by the underappreciated Linklater regular Ethan Hawke), despite her constant and his only fitful presences in the siblings’ lives. For his part, though, Mason Sr. tries to compensate for his absences, and the director doesn’t forget to show that.

Boyhood is at once a labor of love and I dare say the ideal result of this kind of filmmaking. That Linklater remains this consistent and committed in his craft, producing laudable works like this year after year, is truly an extraordinary feat. Also a poignant ensemble piece, it marks a thrilling debut for Coltrane, another engaging undertaking for Hawke and, above all, a delightful comeback for Arquette.

“In the benighted landscape of palace ruins,/the blind poplars, in an abortive, elliptical row,/put their foreheads to the moon…” By Raza Ali Hasan

"here/ death is frolicking in the snow// and only a quarter of the story is ever told/known..." Weekend poem, by...