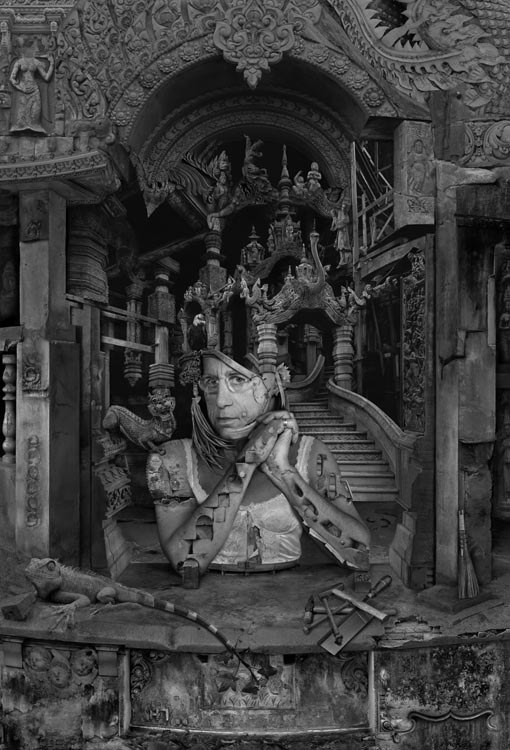 The song of the sirens

On that journey Odysseus wanted to hear the song of the sirens. He already knew what it was like. And this time he didn’t have the others tie him up.

A few hours were left before they reached the island. Time was dragging on. Wild images in Odysseus’s ancient head.

Silence was supreme. The waves were of course babbling all around the ship.

And the island was still there. And Odysseus not tied up. Silence was supreme.

What should we do now?

Did I only imagine it?

What, have you never been to a dog fight? But you must see it, it’s a fantastic sport. For two hours the dogs tear at each other, the perfect bloodline wins. What, it’s cruel? Nonsense, it’s just a sport. When we see one about to bleed to death we throw in the towel and the master removes the other dog from the ring. You’ll have to come to see for yourself. There was only a priest once whose wretched pitbull — the dog dealer must have conned the eejit — was already half flayed, we were all yelling, c’mon father, throw in the towel, but he was still waiting, we yelled at him, God will blast you, but he just shrugged: if he’s weak he’d better die.

Who am I to praise you? When I was on my way to you the train went up in flames. We were stuck in Sáp for a good few hours, I took a picture of the train carriage on fire, I even — no mean thing — had the black-and-white photograph developed, I thought in your own way you might be glad to have it. The woman who answered the phone told me to call later because you were working. I will never, never call you again, I raged, the picture has been lying on the bottom of my drawer ever since and you are actually asking if I liked your work. Who the hell am I to praise you?

The inmates of the institute fled from one city to the next. To a place where there were no bombings and shootings all the time. Our doc accompanied us too, doc Fiko. But he was despondent all along because his wife remained at home. And his children. Not ours. He painted ugly black flowers on chocolate paper. Also black seas on chocolate paper, and rocks with a cross on top, although we are Muslims. Then he ran away back home against all odds. Some say they jailed him. Some say they sent him to the firing line.

Two fathers, two mothers, two cars, three children. Portioned out into two families as evenly as possible. It is summer, the sun is shining, they are picnicking together by a cornfield. The fathers spread the checked mats, the mothers produce the carefully prepared food from the baskets, tomatoes, green peppers, cheese, fried chicken, hard-boiled eggs, the thermos flask with coffee, the lemonade bottle, the little girl walks into the cornfield unnoticed, presses her palms on her ears, on, off, on, off, on, the gay indistinguishable voices are now audible, now not at all, as long as she keeps playing this game she is thinking, if only she had never been born.

For months he had been ruminating on a combination but having to divide his attention into so many directions — applying for grants, teaching, family, shopping — he could never get through with it. Then everything combined in such a way — the grant taken, an academic break followed, his family went on a trip to let him work but before leaving, his wife did all the necessary shopping — that for a full week he had no other task but to get through with that combination.

On the first day he was late to rise, made coffee, leafed through the papers, listened to music and not for a minute did he sit down to the piano.

The second day he went to the swimming pool, it did him a world of good, he felt refreshed all day, watered the plants, cleaned the windows, vacuum-cleaned, in the evening watched one or two films.

The third day he woke up a bit cross-tempered and no sooner did he pour out coffee but he was on the verge of sitting down to the piano — when it occurred to him that the day before he forgot to dust it, so he laid his cup aside and with a soft cloth dusted it all over delicately. When it was over, he sat down and played a few notes. Stood up, made a few steps across the room. The kit for cleaning the strings must be somewhere, at last he found it in the wardrobe. He started wiping the strings one by one, delicately. By midnight he was halfway through.

In the morning he started right away, by the end of the fourth day all the strings and a few keys were done.

On the fifth day he continued the work, dusting every key, one by one.

On the sixth day — he had been working from early morning till four a.m. without a break — the work was completed.

Joseph has no father. He has a mother, aged 16. He has a grandfather and a grandmother. He has an orphanage. Bad marks at school. Printer. Wife, two children. Divorce, no children. New wife, divorce. Clinic, Prozac. Bad, job is bad. Other job, worse, same place. On the morning of September 14, 1989 Joseph walks in his workplace with an AK-47 submachine gun, a 9 mm SIG Sauer pistol, two MAC-11s and a Smith and Wesson 38 revolver and within half an hour shoots eight people, wounds twelve more, then places his SIG Sauer beneath his chin and pulls the trigger. In Louisville’s Cave Hill cemetery beneath his name and the two dates one can read, “beloved father”.

“Idleness, exhaustion, contentment—these were things reserved for aging dogs warming their lazy bones in the sun.” Story of the Week (August 12), by Tony Van Witsen.

"In July 1966,/ weeping and wailing was heard/ from Cherry Grove to Corneille Estates..." Weekend poem, by Jeremy Freedman.