The teleological nature of “progress” or “development” is an intrinsically flawed quality. There’s something dismissive, at best, about prescribing that any society or group needs to follow a certain model for growth, whether it be economic, cultural, or spiritual. At the heart of colonialism and any “modern” expedition to “aid” the poor savages of some distant land is a blindingly violent and insensitive value judgment that works to subsume difference into homogeneity, while simultaneously moving inextricably along an increasingly tense border where emancipation, and in some cases retribution, will occur. This action to reclaim sovereignty articulates itself in an equally violent, if less physical, sense of loss in the former colonising force. 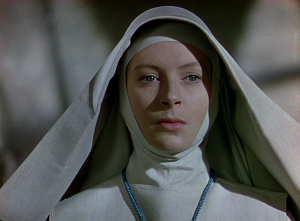 Michael Powell and Emeric Pressburger’s Black Narcissus finds itself situated at an interesting position to reflect the collapse of British colonialism following the second World War (to lift an insight entirely from Dave Kehr[1]). Opening the same year that India achieved independence from British rule, the film follows a group of Anglican nuns who set out to open a convent, school, and dispensary in a former brothel in the Himalayas. Invited to set up in the abandoned “palace” by the general, the young Sister Clodagh (Deborah Kerr) is charged with establishing the order’s presence in the place and introducing the native peoples there to Christian ways while tending to their pedagogical and medical needs. The vertiginous mountain range that surrounds the palace makes the situation’s perilousness physically manifest; steep drops abound and reinforce the consequence of losing one’s footing in this new terrain. The characters speak at length about the qualities of the air and water affecting them and upon arrival the five nuns are all beset with a rash. The natural world insists itself into these women’s lives, its organic fecundity contrasting with and exposing the artificiality of the nun’s belief system and their mission in the region.

Warned of the previous tenant’s inability to deal with the location’s brute nature by Mr. Dean (David Farrar), who works for the general, Sister Clodagh’s resolve remains steely while others who have come express doubts about their purpose there or their ability to perform their tasks. The general pays the people to attend the school and the clinic, again exposing the unnaturalness of the people’s desire for what the nuns have to teach. One nun in particular, Sister Ruth (Kathleen Byron), finds the nun’s habit restrictive as it impedes her own desire. Portrayed as mentally unbalanced and distracted, Sister Ruth acts impulsively when attempting to help the local people and slides slowly into an ill-advised infatuation with Mr. Dean. Taking Mr. Dean and Sister Clodagh’s relationship to pose a threat to her own growing desire, Ruth’s unbalanced disposition shifts into something more threatening, her grin becomes manic in one exchange with Clodagh and she sends for a secret package from Calcutta. Her defection from the order and subsequent confrontation with Clodagh adds a darkly tense tone to the film. Post-transformation Ruth’s dark dress and pale skin contrast against the pale walls of the palace and the white robes of Sister Clodagh and the other nuns.

Ruth here becomes a manifestation of the manner in which artificial social apparatuses repress desire and expression. Her emergence as the dark force stalking the convent at night, prowling through the jungle, her face swarthy and her eyes wild, demonstrates the more dramatic manner in which the repressed may return. The manner in which she is aligned with the natural setting and the darkness draws a line connecting her desire to the natural world that persists beyond the facade of faith inspired by the order. Her fate, ultimately, is to resolve the division between the order and her desire by becoming terminally one with the natural world. Sister Clodagh, too, is saddled with the weight of her own inability to express her desires. Given through several luminous flashbacks, Clodagh’s history of a failed youthful romance — wherein the hopeful suitor spurned her in pursuit of financial wealth in America — crystallises in the thin air surrounding the palace, its seemingly limitless vistas transcending time and space. Her retreat into the order from this is revealed to be a coping mechanism, a means to distract herself from this failure.

Powell and Pressburger deploy light and colour to develop the mood of their film to great effect. The interior of the palace is saturated with blue colours, dissolving the delineation between its interiors and the vastness of the horizons outside. The scenery of the women at work outside the palace emphasises their minuteness and the grandeur of their natural surroundings, and works to reiterate how small and ignorantly presumptuous their mission to “civilise” the region’s inhabitants is. Conversations and interactions take place at all hours of the day and the directors employ the natural light of the time to great effect, heightening the drama of the exchanges with dusky glows or the midnight blues of night. The prominence of light and colour here serves to reinforce the power of the natural world in the film; the nuns, dressed in white, function as canvasses on which the world projects its colour. When this order is corrupted by Ruth’s retreat into her own deeply personal emotional issues, tellingly her dress becomes a dark burgundy, a smudge, a colour which reflects none of the natural world’s hues but, rather, the abstraction of them.

This abstraction of light and color begins to speak to the film’s contingency on the same colonial project that it critiques in some measure. Many of the backdrops in Black Narcissus are constructed via gorgeous matte paintings. These paintings, however, echo the manner in which colonialism abstracts and commodifies land in its own interest. Rather than engaging with any direct, concrete, location, Powell and Pressburger situate their film in an imagined area, one that must be brought to life, constructed, from an abstract idea of how that nature looks and how it functions. Procedurally, this is in many ways identical to a distinctly British colonial project that, rather than seeing and engaging with the actuality of the new world, projected a fantasy of use and ownership onto those spaces. What can be seen here, then, is an allegorical relationship between the screen and the various colonies of Britain; in each instance an imagined landscape is projected over an actual one, the actual being abstracted into blankness before its imagined form is painted into reality. That the project of the film may be in tension with Britain’s larger colonial project in no way diminishes its contingency on them.

Black Narcissus ends not with the defeat, per se, of its colonisers, but rather with a departure wherein both the parting group and, by extension, the viewer are both left more sensitive to the complex ways that power, desire, and fantasy are entangled within a colonial project. Having temporarily resisted the “civilising” overtures of the sisters, the landscape welcomes a rain and the breaking of the monsoon season. Again, however, this respite is temporary and inflected by the presence of Mr. Dean who remains behind. Having accepted that to live in a place requires giving oneself over to it, its particular cultures and geographical realities, Dean embodies the way both the natural world and its people, indigenous or colonising, are transformed by the colonial encounter.

“New constructions in the city — often featureless, rectilinear beehives built inside gated compounds — are frequently christened as a ‘court’, ‘manor’ or an ‘enclave’.” Part II of Chitralekha Basu’s look at how English is used in modern Calcutta.