It all begins—and ends—with a close-up. While most of The Great Train Robbery (1903) features the sort of distant, proscenium-level framing typical of preclassical cinema, past exhibitions of Edwin S. Porter’s hugely influential proto-western also included a single medium close-up that (as instructed by Edison Studios) could be inserted either at the film’s beginning or end. Set against a neutral background, the film’s train-robbing antihero glowers and gazes directly into the eyes of his captive audience, aiming his pistol theatrically toward the camera and unloading a round of gunfire into the thoroughly dismantled fourth-wall. This now-iconic shot (famously recreated in the denouement of Martin Scorsese’s Goodfellas) encompasses the contradictions of the preclassical “transitional” cinema. Narrative absorption could be momentarily upended by a single image that, in its direct address to the spectator, ruptures the illusion of a contained diegetic space and derails the forward momentum of narrative progression. It epitomizes what Tom Gunning terms an “exhibitionist confrontation,”[1] where the continuous flow of action is momentarily interrupted by a discontinuous image designed to elicit pure stimulation or shock. Gunning describes the effect this shot might have had on turn-of-the-century spectators as comparable to the thrill of a carnival ride, and cites its inclusion as evidence that the film “point[s] in both directions, towards a direct assault on the spectator (the spectacularly enlarged outlaw unloading his pistol in our faces), and towards a linear narrative continuity.”[2]  A discontinuous “attraction” autonomous from the film narrative, this “primitive” use of the close-up does not plunge toward the bandit’s face in some last-ditch effort at characterization or audience identification, but rather provides an exhibitionist display designed to startle or surprise the audience; it is, in short, a remnant from the cinema of attractions where “[t]heatrical display dominates over narrative absorption, emphasizing the direction stimulation of shock or surprise at the expense of unfolding a story.”[3] 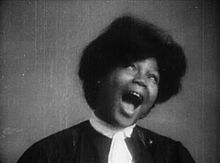 Four years later, Porter directed another “story film” that sandwiched its crude narrative between a pair of fourth-wall shattering close-ups. Laughing Gas (1907), an early Edison gag film, bookends its narrative—again told in vignettes filmed from a distant, stage-bound camera position—with a pair of close-ups that recall the confrontational shot of the gunman from Porter’s earlier film. The film opens with a medium close-up of an African-American woman, identified in the Edison Catalogue as “Mandy” and played by Bertha Regustus, whose bandaged face contorts into a comic, puffy-cheeked expression of pain as she rhythmically shakes her head and massages her swollen toothache. At the film’s conclusion, after a dose of nitrous oxide momentarily sends her into uncontrollable fits of laughter, we again see her face in medium close-up. This time she convulses into a series of exaggerated open-mouth guffaws, rolling her eyes in a delirious display of drug-induced pleasure as she bobs her head from left to right. The film’s middle section—the bulk of the film’s flimsy narrative—documents Mandy’s slapstick encounter with her dentist, a put-upon straight man who administers the eponymous “laughing gas,” and her perilous trek back home, a journey fraught with passers-by who find her nonstop laughter contagious and gradually all crack up themselves.

In Migrating to the Movies: Cinema and Black Urban Modernity, Jacqueline Stewart argues that these close-ups of the film’s African-American heroine (a rarity in early twentieth-century cinema) gave turn-of-the-century audiences a fleeting (if vital) moment of identification with a person of color. She contends that these shots “might further indicate a rare effort to bring this character closer to the (white) viewer, to enlist audience sympathy for and/or identification with a Black subject” or, conversely, “may… instead highlight her function as spectacle.”[4] Stewart’s last-minute about-face, where she concedes that these close-ups might not humanize Mandy but rather reduce her into larger-than-life racial spectacle, exemplifies one of the dangers of understanding a transitional cinema that straddles the dividing line between attraction and narrative. One cannot approach these films as one might with their “classical” brethren—the language will not be decipherable.

Laughing Gas, in short, traffics in racial spectacle. These autonomous close-ups of Mandy’s face function as a spectacle divorced from the temporal flow of the film’s narrative. Porter’s film does not use these close-ups to elicit audience identification with our heroine or drum up some sort of cross-racial empathy with her plight, but instead tries to jolt, jostle, and stimulate. These shots recall the “facial expression” subgenre of fin de siècle cinema, where close-ups of the performer’s comic or ghoulish facial contortions served as the prime source of shock and amusement. Like the confrontational image of a bandit firing into the faces of his unsuspecting audience, the “before and after” close-ups of Mandy’s face take place behind a toneless, indistinct background far removed from the urban exteriors and transparently fake interiors that make up the film’s story space. Following the linear temporal logic of the film’s narrative (indeed, the close-ups match the narrative progression from medical malady to drug-induced euphoria), these shots nonetheless rupture the illusion of narrative absorption and ignore all notions of an invisible fourth-wall (which would later become de rigueur in the classical narrative cinema). She gazes directly at the spectator, delivering what Gunning describes as “the recurring look at the camera by actors… [that] spoil[s] the realistic illusion of the cinema,”[5] and warps her face into over-the-top expressions of physical pain and narcotized delirium.  Twisted into a variety of comically absurd contortions, Mandy’s face becomes an “attraction” on par with the flurry of gunshots found in The Great Train Robbery. Porter’s film treats our heroine as a comedic object, his camera simulating an ethnographer’s gaze as it renders her into a spectacle to be gawked at by white theater patrons. It perpetuates the same racist fascination with Black (or “otherized”) bodies that contributed to the development of human exhibitions, ethnographic surveillance, and black minstrelsy.

Laughing Gas, in short, traffics in racial spectacle.
But even as these two close-ups reduce our heroine into an object and exhibitionist “attraction,” the film’s narrative can alternately be read as one that satirizes (and coyly critiques) the white fascination with gazing at Black bodies. As Mandy moves unencumbered through the public sphere (itself a borderline transgressive act), her comically oversized body and boisterous pantomimic performance marks her as a source of fascination for the white characters she encounters. Mandy marches through one set-piece to the next with what Stewart describes as a “seeming independence and unchecked mobility,”[6] and her disruptive presence tantalizes all those around her. In short, the intra-diegetic gaze of the white passers-by who are infected by Mandy’s raucous laughter matches the extra-diegetic gaze of an audience who similarly derive “pleasure” from watching her. Even as the film depicts Mandy’s face and body as cinematic attractions, the extreme slapstick behavior exhibited by the film’s white characters—who gawk to the point of hysteria—seems to lampoon and deride the same white spectator solicited in the opening and closing shots.  Even as Laughing Gas buckles under the weight of its racist implications, its central narrative nonetheless acknowledges the insidious logic behind its production—where Black bodies exist as exhibition objects displayed for white consumption and/or surveillance. In a somewhat subversive fashion, it transforms that same white spectator into a figure of comic derision, the proverbial butt of its jokes.

“In Trinidad, women want bigger breasts, bigger butts and stomachs that ripple with the slightest movement.” LaTroya Lovell comes to terms with her desire to be fat.

"they seldom gave each other pleasure/and in vain they learnt patience and goodwill,/ in vain they taught their bodies..." Poem...