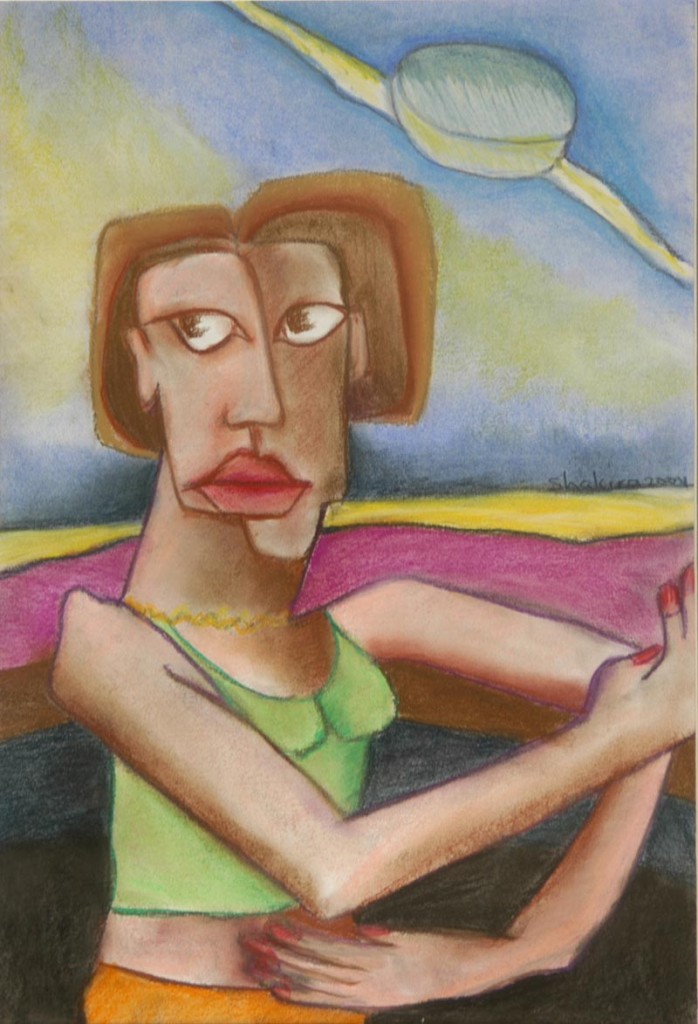 The noise of construction wakes me up in the morning. Turning to my side I notice that a yellow string cordons off my sleeping wife. There’s a tiny excavator on her forehead and one-inch long workers are demolishing her face with concrete crushers. A black sign on the yellow line reads: WIFE UNDER CONSTRUCTION.

Great, she must have ordered this one too from her favourite online beauty shop, no matter how much I keep telling her she doesn’t need any of this stuff. I watch as a crane lowers my wife’s new nose into the dug out red pit in the center of her face. It’s quite a pretty nose, I admit. A few smudgy workers hammer her face using all of their strength, the others are just sitting on her ear, drinking beer. One even stands up and pisses down onto the pillow.

There’s a little guy holding a piece of paper. That must be the blueprint. I peek over the tiny man’s shoulder and gaze at the drawing. Say! It looks rather nice! But it could be better. Using two fingers I pinch out the blueprint from the guy’s hands. He yells at me, shaking his micro fist, but I flick him away. Then I sneak out to the kitchen. Holding a magnifying glass and a very sharp pencil I make a few changes in the drawing. Then another few. Make the nose look a bit thinner, the forehead more narrow, and so on. When I’m done, I hand back the blueprint to the little guy.

After a few hours, they finish the job. A man dressed in a suit arrives; he cuts the string with scissors, drinks a few glasses of champagne, then staggers back to a matchbox sized limousine he arrived in. He drives away, disappearing behind the closet.

I notice that a yellow string cordons off my sleeping wife. There’s a tiny excavator on her forehead and one-inch long workers are demolishing her face with concrete crushers.
I hardly recognize my wife she is so beautiful. Other people stare at her too. In the street, tourists come over to us, they ask if they could photo themselves with my wife’s face. A telephone call arrives: a noted international architectural magazine would like to publish a picture of her head. After a week, they send us a copy. Her portrait is on the fourth page, along with a newly built shopping mall in Yokohama. I keep praising myself for making those changes in the blueprint. But then, the accident happens: on a windy day, walking on the street, a strange noise comes from my wife’s head, a cracking sound, like if something collapsed behind her eyebrows. A little piece of her forehead falls out, down to the pavement, and through the hole I can see the wrinkled brain in the skull. What’s more, one of her eyeballs slackens, it seems like it might pop out from it’s socket any minute. When she gazes down you can clearly see the muscle-line that holds the eye in it’s place. She looks pretty awful. I keep consoling her, wiping her hanging, crying eyeball with a hanky, telling her that one of the miniature workers must have fucked up the blueprint.

So we order the face-reconstruction beauty pack again. I take my wife to bed and open the package. Tiny workers crawl out and pester her face. I take away their blueprint and show them the opened architectural magazine. They look at it, scratching their chins, then they nod and begin to work. Seemingly they want to start from scratch – they slide tiny dynamite sticks into her face dimples, they run into shelter. Soon, an explosion tears my wife’s head into bloody pieces of meat – and then construction begins. I feel tired. I fall asleep, leaving them to work.

In the morning, upon waking up I find the miniature version of the shopping mall in Yokohama where my wife’s head had been.

“好き?” she asks, her voice echoes through the small building along with calming music. Tiny Japanese teenagers with party-coloured hair wander around behind her window-eyes. They wave to me, then venture into a sushi bar.

Zoltán Komor is 27 years old and from Hungary. He writes surreal short stories and which have been published in several literary magazines. His first English book, ‘Flamingos in the Ashtray: 25 Bizarro Short Stories’, was just released by Burning Bulb Press.

“Nizam is just as homeless and out of place in the American’s valley as Antigone is in Thebes when it is reduced to Creon’s state of exception.” Part two of Peter Krause’s essay analysing Sophocles’ ‘Antigone’ and Joydeep Roy-Bhattachary’s ‘The Watch’.

"life made you expert at hiding/... no one sees you and the wounds/ heal better in the darkness." Poem of...