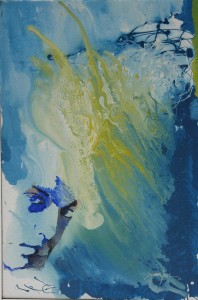 We cannot all see the dreams in the same way 2 by Scharjeel Sarfaraz. Courtesy: ArtChowk Gallery

My brothers and I
lift our dad’s bier, carry
it to Lake Erie

where he rode freighters,
mastered jibs, the luff of sails,
outdid his brothers

in half-assed races
that terrorized lesser craft.
He rests on crossed sticks.

In the dream it takes
all three of us to keep it
from tipping. Shoulders

drop it to the boat
that squelches lower, freighted.
Marc thumbs his lighter,

shields flame with cupped hand.
We shove the dinghy away.
If the chop sinks it

so be it. Wave slaps
knock it about, but it’s true.
What music led him

in his last free years?
Dad, who mocked religion,
heard something singing.

What prayers should we leave
as he turns to fiery ash?
a last bon voyage?

David Sullivan’s first book, ‘Strong-Armed Angels’, was published by Hummingbird Press. ‘Every Seed of the Pomegranate’, a multi-voiced manuscript about the war in Iraq, was published by Tebot Bach. His translations from the Arabic of Iraqi Adnan Al-Sayegh, ‘Bombs Have Not Breakfasted Yet’, was published in 2013, and ‘Black Ice’, about his father’s dementia and death, is forthcoming from Turning Point. He teaches at Cabrillo College, where he edits the Porter Gulch Review with his students, and lives in Santa Cruz. He was awarded a Fulbright, and taught in China for one year.

"The western winds overwhelmed me, blew my garage open, sucked my tuba into the road, dragged it down the pebbly...