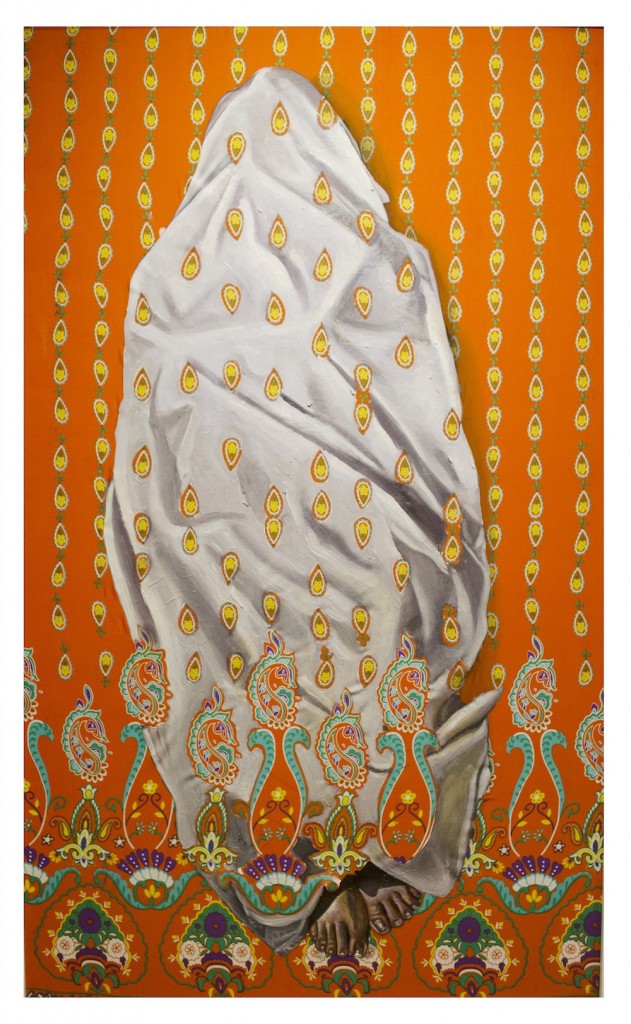 Death of an Artist III, by Sausan Saulat. Courtesy of ArtChowk

Translated from French by the author

The island was much more visible now. Alessandro Salomonsen put his hand as a visor and scanned the horizon. Under the sun, the sea gradually slipped from blue to white and the outline of the land stood out as the silhouette of a large gray animal. He was not accustomed to breathe such pure air and he coughed. The boat rocked slightly.

Putting his hand to the pocket of his shirt, Salomonsen pulled out a pack of cigarettes without filter. As he was dying, he had decided to enjoy the pleasure of pure tobacco. He hadn’t bought a silver hip-flask to fill with brandy – but he had thought about it, for a last drink, after the final cigarette. His death, however, was going to be much less dramatic than a public performance and therefore didn’t deserve so many refinements. It was going to be trivial, announced, a little gray. Suffering probably would add a few colors – if he wasn’t sedated by morphine shots. His death … He shuddered. Despite his efforts, he still couldn’t get used to the word.

He remembered all the heavy bags he had gallantly carried for a few pretty girls met on the platform of a train or a metro station when he himself was a teenager.
Loud voices suddenly bellowed behind him and he found himself surrounded by a cheerful and noisy group.

Salomonsen discretely moved a little further along the railing. They disturbed the course of his thoughts and he wanted to hear the waves again, crashing flabbily against the flanks of the ferry.

He couldn’t stop, however, observing the group from the corner of his eye. A dozen men and women, mostly young, in summer outfits. Mainland tourists, he thought, nothing extraordinary. Their accent was that of the capital. One of the women reached out and pointed at something. The screams intensified and Salomonsen felt his own heart jump in his chest: three dolphins were leaping alongside the ship.

He smile soon turned into a grimace and he threw his cigarette over the railing. The piece of paper and glowing tobacco floated a few seconds in the wind, before disappearing in the blue paste of the merged sea and sky.

“A magnificent view, isn’t it?”

The man next to him leaning on the railing was young and well-built. Salomonsen thought he had a warm smile and found himself nodding to the intruder’s words.

“Are you going to Santo Domenico on holiday?”

The man looked at him, a little surprised.

“You’re with the movie too?”

It was Salomonsen’s turn to be perplexed.

“No, not at all. I’m sent by the administration.”

“Ah, OK… That explains why I hadn’t noticed you in the team.”

He held out his hand.

“Ricardo Rossi, chief lighting technician. My friends call me Rico. I’m part of the little group that you see there. We’re shooting a film on the island. In the Roman city.”

Rossi offered him a cigarette. They smoked in silence, side by side, for a little while. A long hoot of the siren finally indicated that they would be arriving soon. Rossi killed his cigarette and apologized.

“I have to go and check the unloading. Maybe we’ll meet again. I heard that the city is rather small…”

Salomonsen nodded. He remembered what he had read in the guide before leaving: Santo Domenico, 12,000 inhabitants, the smallest of the Aeolian Islands.

Leaving the railing in his turn, he joined the flood of passengers. He had put his only suitcase in a locker on the ferry and played with the key in his pocket.

Salomonsen was the last to get off and he paused a moment to admire the view. Santo Domenico was a picturesque harbor, with its houses jammed against each other, as seeking protection from the wind. Most were painted white, but the yellow, pink or blue shutters added hints of pure joy here and there.

He lifted his suitcase and went down the footbridge.

The crowd of passengers blocked him and he waited patiently. Shouts and laughter burst around him. People shoved, caught each other, apologized. It was the summer holidays. Children sneaked between the grown-ups’ legs, huge suitcases banged against knees and the hum of the fishing boats’ engines going off to sea added to the general hubbub.

Salomonsen saw Rossi disappear with a small group in a van loaded with large trunks. It started with a bang, followed by a longshoreman who was carrying a projector wrapped in plastic. He ran after the car with loud cries, but without result. Annoyed, he contemplated the strange object he was carrying and shook his head.

The crowd cleared gradually and Salomonsen noticed a teenager who seemed to be waiting for someone with a name scribbled on a piece of cardboard. Getting closer, he could read “Mr. Salomonsenn.”

The boy’s appearance struck the surveyor. His very dark curly hair appeared blond in places. But the most surprising were his yellow-green eyes. He thought for a moment of a young goat. He introduced himself to the boy, who flashed with a big smile.

The boy took his suitcase despite his protests and walked up a narrow street. Behind them, the siren of the ferry wailed one last time.

The streets smelled of salt. It had been years since Salomonsen had been near the ocean. His work in the capital took up all his time. It was not even an excuse – it was, unfortunately, the truth.

Stefano walked about twenty meters ahead of him, dragging his big suitcase. Salomonsen felt a little guilty, but he told himself that after all, it was the boy who had insisted on taking his luggage. He remembered all the heavy bags he had gallantly carried for a few pretty girls met on the platform of a train or a metro station when he himself was a teenager … He had a nostalgic smile and looked for his cigarettes.

Our editors pick the best reads of 2014 that contextualized the year for them.