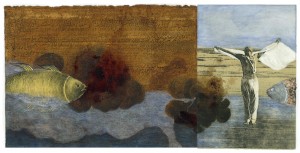 The island is the ocean floor folded, a piece of pale, sandy skin pinched between wind and tides. Time swept its soft flesh into a fortress with towering dunes in the waves’ image, smooth at times, rough and angular at will. A white beach rounds the island as a coarse, sabulous moat between the stronghold and the sea; a lover and a besieger.

Feathered guards patrol this no man’s land, tirelessly circling the windy corridors where their laughter and cries are lost to the empty sky and beach. Tourists flocked to these shores once, but they made their treks back home months ago. They relished the warm days, decorated them with striped umbrellas, lemonade stands and dips in the restless sea. She let them just for a while, until her fingers grew icy and started to pry toys out of children’s hands. They left when her moods turned capricious and she started reaching for their spherical creations in the sand, claiming back her beach without mercy, smoothing it over until all signs they were ever here are gone and forgotten; erasing, always erasing.

From their vantage points, the bastions of the dunes and the soaring passages of the sky, a garrison of gulls could easily dismiss the single figure standing on the beach for a mile marker, straight and unmoved by an equally unyielding January wind. They could write the man off for a large piece of drift wood, in its final resting place nothing more than bones for a body of nomadic sand. They could possibly mistake him for a mast, snapped from a ship lost, save for its spine. Mile marker, mast or man, like so many things that slipped away and turned from useful into garbage after wandering the sea for too long, the birds no longer look for –or care about– the difference.

Mile marker, mast or man, like so many things that slipped away and turned from useful into garbage after wandering the sea for too long, the birds no longer look for –or care about– the difference.

But it is this particular wind, a sturdy south by southwest, who carries the sea’s outcasts onto these beaches. It covers and uncovers what’s lost. It is this wind remembering the forgotten. And its sharp edges that dig and build, cut off his breath as the man strains his eyes at a seesawing ship on the horizon. He checks his compass and knows that the captain is headed for mainland. He secures the buttons on his collar, leans into the wind and his footprints continue an irregular stitch in the sand. His eyes are now focused on different shapes, what sticks out or appears in front of him, fully exposed or half buried. He feels it misshapen under his shoes, calling him for a second look. He knows, he could easily mistake a piece of strong, non-silt bitten rope which he could use to tie something to his bicycle, or stop the back door from clattering at night, for useless frayed tackle. A thick rubber band at his feet is perfect around the cracked plastic case he keeps his watch in- found on this beach and of most definitely Japanese make, according to the island’s jeweler who doubles as chimney sweeper. A small pocketknife, also from this beach, cleans the calcium off a clothespin. To all things that are lost or left here he is their last chance, but although solid ebony, he abandons the smooth wooden board as it will be nothing but ballast.

The seagulls repose their heads while he retraces a few steps, picks up a rare whelk, taps it against the sole of his shoe, turns it round and round in his hands while checking its integrity. Saved for now from pulverizing, it will be the star of a windowsill parade between the tarred toy soldiers, rusted knifes riddled with sea pocks, a broken sundial, cracked wooden pulley strops and orange twine twisted into Turkish knots. The birds call and answer, while he kicks against empty glass bottles. They clunk and roll in front of his feet along the fringed shore line; the deep blue one crusted with gray sand, the green with black kelp tangled around its neck as if to force it to spill its murky contents at his feet; sea water, never love letters.

The Missing Slate’s Jay Sizemore on how film can suffer when pandering to an often unknowing public.

"In times when there was nothing going on the old/ Japanese masters would paint only the inanimate..." Poem of the...