Inherent Vice, a hazy meander through film noir tropes, dozes on your chest like a sleeping cat after you leave the theatre, inscrutable and weighty. It persists, insinuates itself into your thoughts. You emerge into daylight or nightlight relaxed, paranoid, content, deeply melancholic. A film whose structure and ethos seem to reject the notion of edges, preferring instead recursive spirals, dead ends, and ideological & geographic liminalities, Inherent Vice nonetheless exerts itself on you. It is a smooth glacier of frozen pot smoke and nitrous oxide. 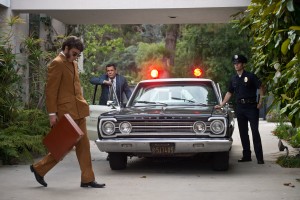 The setup is immediately familiar. Larry “Doc” Sportello (Joaquin Phoenix) is a private eye whose persistence and astuteness are made all the more remarkable by his frequent drug use and its attendant lapses in attention. He is visited by an ex in distress, Shasta Fay Hepworth (Katherine Waterston). She informs him of a plot against her current lover and real estate developer Michael Wolfmann (Eric Roberts). From here Inherent Vice assembles its plot with a loose sort of logic. Doc’s investigation twists and turns as one would expect, but where classic noir plotting possesses a clarity — if also complexity — appropriate to its stark black and white visuals, Inherent Vice languidly curls around the contours of its plot. Connections between characters reveal themselves, but sometimes without much fanfare, and Doc’s story seems to unfurl parallel to a larger story to which the viewer has little access. Potential government conspiracies are insinuated but never explicated, all the while the plot seems myopically concerned with Doc’s journey.

Anderson echoes the narrative’s focus on Sportello by shooting much of the film in medium and close-up; there are few wide shots to establish locations or spatial relationships. The focus here is on character, relationships, and details that may or may not contribute to an understanding of the plot’s overarching mystery. The concentrated narrowness of this visual strategy evokes both the peculiar attentiveness experienced by a “doper” and translates Pynchon’s linguistic playfulness from word to image in a way that captures the spirit of the text as much as it fundamentally alters it. Phoenix’s performance similarly favours expressiveness over clarity. Dialogue seems to be mixed low in the film, and many of Doc’s exchanges fall from his mouth seeming almost by accident; his sentences frequently trail off into mumbles or whines, guttural noises that, again, seem to favour generating a certain indeterminate atmosphere rather than clarity.

Amid all this, however, unemphasized and unassuming, is an anchor, perhaps. The plot against Wolfmann hinges on his money, naturally, which is imperiled by his drug-fueled re-evaluation of the ethics of charging people for shelter. In this we can perhaps orient the film’s concern, obfuscated as it may be, to align with Anderson’s There Will Be Blood. In both instances the monetization of a natural resource — oil in There Will Be Blood, space in Inherent Vice — is seen as a corrupting activity. Where the earlier work centres its action on Daniel Plainview and his development toward oil tycoonery, Inherent Vice, in keeping with it’s hazy construction, absents Wolfmann from the focus of the film and relegates him to a point on the periphery. The film’s sympathy with Doc and his position outside of this framework of development and capitalization further accounts for its indirect construction. Inherent Vice is not only a reconstruction of a specific historical moment of transition between the utopic hippy sixties and the seventies, but also a work that reflects the increasingly removed manner in which folks experience the corruption at the heart of a socio-economic system predicated on the uneven monetization of and access to elements of life that should be universal.

In this vein the film’s title broadens its relevance beyond its resonance in the film itself. Inherent vice is defined as a quality inherent to a good or property which contributes to its deterioration. Defined as such, inherent vice may be read into any number of aspects of the film and the relationships of its characters, who each seem to be struggling with some aspect of their personality that complicates their lives. Beyond this, especially bearing in mind the thematic connection between this film and There Will Be Blood, one begins to see that much of Anderson’s work has been exploring these qualities, both in his characters and, more broadly, in American society. The same impulse that drives Plainview resides in Wolfmann and the ambiguous forces that work to reinforce his land development. Sportello, then, can be seen to be a radical inversion of those aspects. A decision he makes late in the film demonstrates his, somewhat tentative, rejection of a system that prioritizes profit over people.

Given this larger project of Anderson’s work that Inherent Vice focuses with Doc’s inversion of Plainview, the film’s final shot also performs its own inversion. Sportello is shown in a two-shot with a companion as he drives. The exterior of the car is fogged, nondescript. As the two converse headlights shine into the cab of the car, illuminating Doc’s eyes and upper face, he looks out of the frame and through the light to a spot somewhere beyond the car on the horizon. Here we can see the film inverting the conclusion of another work beyond its source material, Fitzgerald’s The Great Gatsby. Rather than Gatsby’s hopeful and naive striving toward the green light that recedes before him, and the dignity of the striving and the striving’s entanglement with the past, we are here shown the light moving toward Doc. Regardless of his own Utopian ideals, a future is barreling unavoidably toward Sportello that began at the moment the idea of America came into being. This future is blinding bright and inherently bound to the condition of the country and its people, and Doc is, as all Americans are, born into it ceaselessly.

“It’s the hour you hate most,/ when afternoon falls/ as if collapsed from the roof…” By Óscar Cerruto, translated from Spanish by Jessica Sequeira

"The picture paints itself again and again... a room, a floor, a window. A table, a chair. Squares of sunshine...