Anam Abbas is a producer of ‘Showgirls of Pakistan,’ an independent documentary feature about dancing girls in Punjab, Pakistan. The film revolves around the stories of three women in the world of low-brow entertainment, profited from but never heard. The Missing Slate spoke to Anam about the goals of the project, and the need for public support via their crowdfunding campaign. 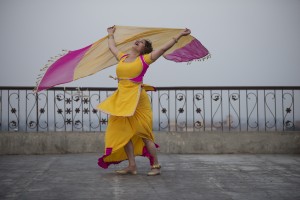 A great deal of hype and controversy has surrounded Zunn: Showgirls of Pakistan during its production. Tell us what the film means to you and the rest of the crew; what were the goals you set out to achieve?

We are super excited about how enthusiastically the film is being received already, while we are still in post-production. It feels great, as independent film-makers, to have the support of our audience. We feel that our work has already borne fruit because we have already opened the conversation about sexual entertainment in Pakistan, issues around performing arts, women in show business, and the lowbrow culture that, before the images we released, people were either unaware of, or were shy to speak of. We have already won a battle. The film, once out into the world, will serve to deepen this conversation and, we hope, help people move away from black and white rhetoric around women who dance for a living.

Your film specifically focuses on the diverse experiences of three women. What are their motivations for appearing in your film?

The women who appear in our film are frankly tired of being misrepresented. They are labelled whores and are rejected from society. They dance for the entertainment of men who pay to have a ribald night out, yet these men remain pure and the women are the ones vilified. Very simply, anyone living on the fringes of society — misunderstood, labelled, demonized — would jump at the chance to tell their own story on their own terms.

You’ve stressed that the women in your film are not “victims”. Why is it important to separate them from that label?

We are not here to sell an image of the abused and crippled Pakistani woman. We believe that the act of speaking is an act of agency. When these women agreed to be filmed they agreed to defy, to rebel, to not be silent. In this itself, they are not victims. They are Heroes.

We also want to stay away from the narrative of the woman for sale. Yes, we are dealing with a world that profits from the woman’s body, but there is a defiance that is apparent in the sexuality for many of the women on stage. When they are on stage, they are in charge, they lead the conversation. The men will roar when they demand them to. The problem is when we refuse to acknowledge the existence of the other. These women don’t need to be saved.

Would you say that although the film’s focus is narrow, the hope is that Zunn: Showgirls of Pakistan will encourage thousands of other women in similar situations to find their own voice?

We hope that our film helps our audiences see our subjects as the complex and beautiful human beings that they are. We also hope that it encourages other storytellers, no matter who they are or what story they want to tell, not to be afraid of saying what needs to be said.

You’ve responded defiantly to threats you received about the “taboo” nature of your trailer. How much of a problem is censorship in Pakistan? How crucial is it that films like yours help to cultivate an environment where the darker side of Pakistani culture can be spoken about freely, without fear?

In Pakistan, as we know, it’s very easy to be accused of blasphemy. Men wave around ideas of honor, nobility, decency, chivalry, every time a woman speaks her mind. We have no patience for any of that. There are many people in Pakistan who have risked far worse than we have. Some are still fighting the good fight; others have sadly been killed or forced into exile. Censorship doesn’t work. Truth-tellers will always find a way to speak. My fear is the increasingly materialist/flaccid nature of our communities/species.

How unique is cinema’s role in providing a voice for the silenced and exploited, compared to other artforms? What makes film the ideal medium for telling this story?

Film is art for the masses. It always has been. It has always had the power to break class barriers, just by the act of gathering together in a theatre. It doesn’t have the exclusivity of an art gallery, doesn’t require literacy. Going to the theatre is like going to the mosque. You commune.

For us, the world we have captured is a visual treasure chest. Documentary often is the unveiling of performance. It is the constant struggle for truth. The audience and the film-makers are both party to the titillating performances by the showgirls. We revel in the colour, the music, the bawdy energy of it all. It is essential to first experience the culture one is trying to dig through. We have to be the men that pay to watch these women dance and then we have to flip our perspective and be the girls — feel the vibrations of the world offstage, the contrast between the lived experience of the two. Cinema allows its audience to receive all this information.

You’re currently hoping to fund the film’s post-production with a crowdfunding campaign, which is struggling to meet its target with less than two weeks to go. How valuable is it for indie filmmakers to receive financial support from the public?

All around the world, documentary film-makers usually deal with financial struggle. There just isn’t a lot of money out there for docs. In Pakistan, there isn’t really any money out there for the arts in general and for cinema in particular. I can’t imagine Mandviwalla picking up a feature documentary film to distribute in its cineplexes. Not even in the next 10 years.

Crowdfunding, and funding through our own pockets, has really been the only thing available to us. Crowdfunding is great though because essentially you are asking your audience, and we have so many people excited about this film, to essentially pre-buy their ticket to the film. It solidifies your market. It helps us really see, quantitatively, who our audience really is. I think it is wonderful both financially, as people are so very generous, and also creatively, to be able to interact with our audience as we finish our film.  Our campaign has suffered some setbacks due to some security threats, but we are still so overwhelmed and happy about the support we have received both fiscally and otherwise. We have a few more days to go on the campaign and we are not giving up. Again, we urge everyone excited about the film and what we are speaking about, to donate and to help make these last few days count!

What would be your advice for young, financially struggling film-makers who have an important story to tell?

No excuses. Film on the weekends. Don’t be afraid to starve. Story trumps technology.

Click here for the official website of ‘Zunn: Showgirls in Pakistan’, and here for the crowdfunding campaign. The film is currently in post-production and needs that extra boost of public support to be completed, but the campaign is struggling with a week to go. Any contributions, big or small, would be greatly appreciated.

"...Like a prayer, I name/ all the things I did not ask for." Weekend Poem, by Arlyn LaBelle.