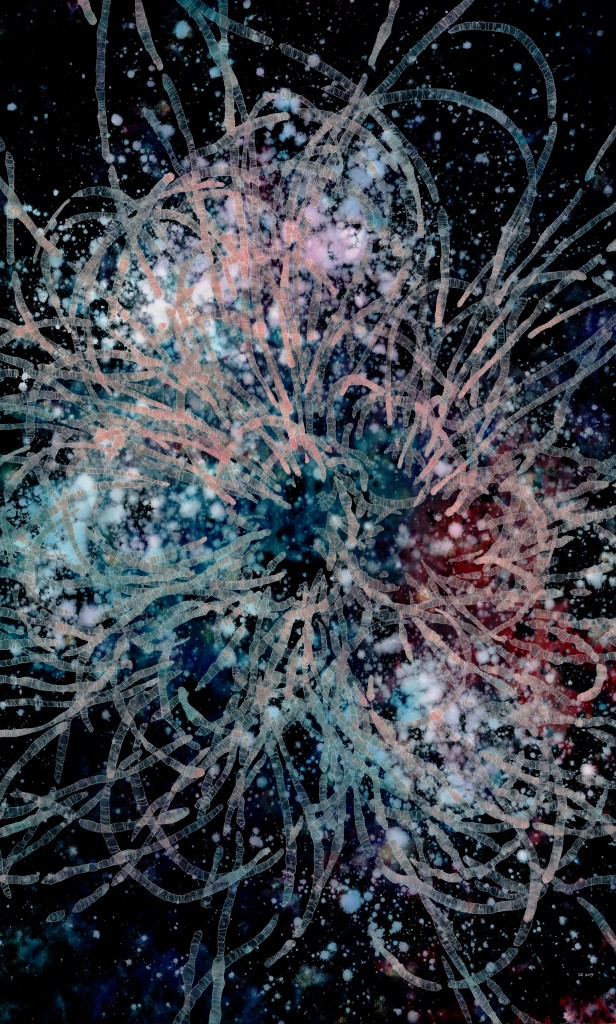 Click here to read the first part of this essay

I do not eat. I devour, relish, savour. A piece of bread “arrives,” miraculously it seems, just as I begin to desire it, from the loving, ministering hands of my wife. Peanut butter on some kind of whole grain bread. And it is every grain I can taste, as the peanut butter — which IS, in fact, flowing (“fact,” too, by now has little relevance as a descriptive word) — flows over the corners of the bread and onto my fingers with a kind of lusciousness, a kind of extravagant sensuality, that makes me realize that — were we, in “fact,” this attentive to the movements, tastes, textures, nuances of the world in our “normal” lives — “We (who) alone/fly past all things, as fugitive as the wind” (Rilke) – we would surely do nothing else but eat, look, feel, be. In the words of Aldous Huxley, writing about his experience with mescaline in ‘The Doors of Perception’: “the will suffers a profound change for the worse…if one always saw like this, one would never want to do anything else.”

“You can see why it’s entirely subversive to the whole culture,” says James.

By now, everything is in a state of coitus, of throbbing, pulsating coupling — “so passionately alive,” as Aldous Huxley put it, “that (it) seems to be standing on the very brink of utterance.” To put it graphically: I am surrounded by a humping, ecstatic world. It is not, of course, a “mystical” observation to realize that our normal human range of vision, smell, taste, hearing takes place in a range more limited than that of many animals, insects, birds — more limited, in fact, than that of many so-called “primitive” peoples. Boomer, for example, clearly lives life more fully through the nose than the rest of us, and you don’t need to be an ornithologist to know that the peregrine falcon… Oh, well.

It’s that old, familiar feeling: I can see through things that are normally opaque to me… But, then again, what more is opacity than “the quality of not letting light through.” But now — for whatever reason, by whatever means — the light does get through, and I can see, not only grass coupling with grass, but the very corpuscles of blood coursing through my veins, the living cells inside the trunk of the tree, the tiny veins and arteries and ever-moving, lubricating, life-giving systems in my own and my wife’s bodies, faces. In the words of the Anglo-Irish poet Louis MacNeice, from a poem entitled ‘Snow’:

The room was suddenly rich and the great bay-window was
Spawning snow and pink roses against it
Soundlessly collateral and incompatible.
World is suddener than we fancy it.

World is crazier and more of it than we think,
Incorrigibly plural. I peel and portion
A tangerine and spit the pips and feel
The drunkenness of things being various.

Yes… “the drunkenness of things being various.” A hallucination? (A word whose Latinate root, hallucinari, merely means “to wander in mind.”) A vision? A somehow heightened level of perception? Does it really matter?

At James’s ever-so-gentle urging, and only slightly against my intuitive wish, which is to remain always outdoors (though, by now, I am far more willing to submit to whatever comes my way than to will much of anything), we go inside.

It’s here that I realize I’ve been — during my previous “trips” — a kind of psychedelic Philistine. Perhaps it was my slightly romanticized, somewhat pantheistic, sense of all this… some idea of the “purity” of nature as against the man-made. But music had, heretofore, never been part of my psychedelic experience. Instead, I had often looked down on those who, I thought, profaned the experience by sitting transfixed in front of speakers or hooked to earphones.

But now it is I who, at James’s urging, am hooked to an earphone, and I realize (indeed, I recall this having actually been akin to a “realization”) that I have, in fact, never actually heard music before… never actually listened.

It’s here that I realize I’ve been — during my previous “trips” — a kind of psychedelic Philistine.
“This must be the way Cezanne saw the sky,” I remember a friend of mine saying while — under the influence of a far less potent psychedelic — gazing at what seemed a rather drab and conventional evening sky off the coast of Maine. But now, hooked to James’s small but high quality SONY cassette player, I have the acute sense of hearing music the way Beethoven — either after the onset of his deafness or during his “hearing” life — must have heard it.

Each note literally reverberates through my body, finds some physical analogue in my corporal being. Listening to Jean-Pierre Rampal playing the flute, I have the sense of somehow actually occupying the physical space between the flute and Rampal’s lips, of music as not merely aural but primordially physical. From Brahms to Roberta Flack, from Pachelbel to Kitaro, parts of my body (especially my arms) seem actually capable of being elevated by the music which no longer merely enters my head, but inhabits my body.

Nor is this sensation merely sensual… it is also aesthetic. Small variations in pitch and duration, subtle shifts of tonality and measure, movements from strophe to antistrophe, from andante to allegro, are suddenly both felt and audible to me in ways I had never before experienced while listening to music. The music is no longer something “out there” which I am able to — such a cold word — “appreciate.” It is now something “in here” which I am able to experience, embody… inhabit.

One might think that all these sensations would lead someone experiencing them to feelings of great power, to a degree of hubris. But it is exactly the opposite. What I feel above all is a sense of profound humility and awe before the wonder and beauty of the world, the utter rightness of its cycles of death and creation, of which I feel intimately a part. It is a sense of being held by this world, of great confidence in the beneficence — as well as the deep, mysterious, enduring power — of my surroundings. Like Yeats, writing in ‘A Dialogue of Self and Soul’,

I am content to follow to its source
Every event in action or in thought;
Measure the lot; forgive myself the lot!
When such as I cast out remorse
So great a sweetness flows into my breast
We must laugh and we must sing,
We are blessed by everything,
Everything we look upon is blest.

“Then the boy’s voice, rough-edged, moving into wailing. This came into the man’s guts, it seemed.” As part of a special feature to mark St. Lucia’s national day, two stories by John Robert Lee.