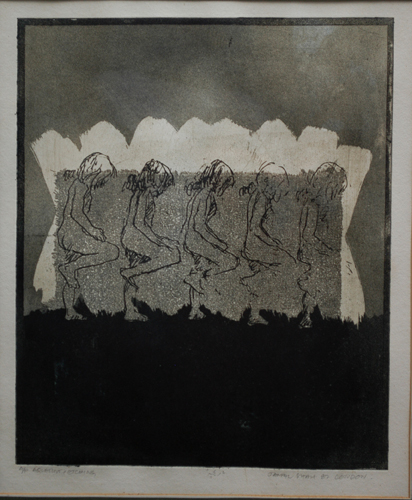 Tomorrow was today and yesterday; the watch, a Christmas or birthday present that lent one a certain prestige, but did not measure time. The warm or hot morning sun would pour in through the classroom windows and paint us young, with mocking smiles and tender glances, among notebooks and satchels and one desperate, rebellious hand scribbling notes. The girls had more watches than the boys and were more colourful and more beautiful. Many of us boys wore ties and some sported a dandyish, melancholy, futile handkerchief in our top jacket pocket. Another piece of good fortune: we had no money. Time flew by in the Literature class and the Art class and dragged minute by slow, laboured minute in Philosophy. When the caretaker opened the door to tell us it was time, we would stretch and ease ourselves out of the mental gridlock into which we had sunk and would once again fill our eyes with the light of day, of which no mention was made either in the notes or the text.

Philosophy, or perhaps something else, had transformed the philosopher’s face into a mask, filled it with hollows and wrinkles, his face taking on the dull, unfeeling texture of tree bark. He seemed to be a man incapable of failing anyone or, indeed, of loving anyone. He never raised his voice, almost always wore a black suit and a rather worn, grubby, white shirt, and his dark, smooth hair formed an opaque, greasy helmet. We had him on Mondays and Thursdays, and his was the final class of the morning, when it was hardest to think or, at least, to follow him down dark philosophical corridors. At two o’clock, we all crowded onto the trams to go home.

In the last fifteen minutes of the class, torpor and impatience overwhelmed us.

That Thursday was no different from any other, but, instead of talking to us about Platonic myths or the Aristotelian theory of potentiality and action, he began explaining St Thomas Aquinas’s five ways a posteriori of proving the existence of God. Our teacher had something of the plain-clothes priest about him, and on that Spring Thursday, the class smelled of incense, of church, or perhaps it was the scent of rosemary and lavender wafting in from the nearby fields.

He went on and on ad nauseam about the contingency of human existence. We were doubtless all of us contingent, but we didn’t know what this meant. Then he said: “Some things exist only contingently, they can exist, but could also not exist.” Well, there we were, cupped in the Creator’s hand, and not one of us was necessary – we wrote in our notebooks – but there was no doubting that we enjoyed being together and, above all, talking, and that we were all different, like the notes in a disparate score entitled Second Year, Group A, Room 24. It seemed absolutely necessary to me to admire Begoña’s eyes or to laugh at Lauro’s jokes regardless of their contingency or lack of it.

In the last fifteen minutes of the class, torpor and impatience overwhelmed us. We listened out for the approach of Aniceto, the caretaker, to announce that class was over, and just when we thought he would never come, the door finally opened. That Thursday in early April, was just like any other. Either he was late in coming or the clock, some clock somewhere, was moving very slowly. Suddenly, we saw the handle move, and Aniceto poked his bald head round the door, looked at the teacher, who, in turn, looked at him and, raising his voice, shouted: “Time!”

At that moment, we heard a thud at the back of the room. Someone had probably dropped a satchel. No, it wasn’t that. It was Ricardito. A thin boy, with blue eyes and a face half-innocent, half-old-before-his-time. A nice lad. Friendly. Whenever he smiled, he looked rather frightened and always raced off to do his homework because, according to him, time was ticking. It was time, his time, and he was dead.

Ricardito’s contingency was an extreme example. We knew he was in love with Matilde. We knew that, one day, small, chatty Matilde would say “Yes”. But we will never know for sure if, by dying on that Thursday afternoon, at that precise moment, he caused us all to remember for ever Aquinas’s third argument, or if, years later, his death had anything to do with Elena and Milagros becoming nuns or with Seve crashing his car one night on a road in Ciudad Real.

Medardo Fraile (b.1925) grew up in Madrid, and lived through the siege of the city during the Spanish Civil War. He first achieved literary recognition for his work in experimental theatre, becoming part of a group that included Alfonso Sastre and Alfonso Paso, and writing the acclaimed play El Hermano. During the Fifties, his focus moved to short-story writing, and he left Franco’s Spain to eventually settle in Scotland as Professor of Spanish at the University of Strathclyde. His stories brought him many awards, including the Premio de la Crítica, the Sésamo and Estafeta Literaria prizes as well as the Hucha de Oro. He is widely thought of as Spain’s finest exponent of the genre. He died in 2013.

Margaret Jull Costa has been a literary translator for nearly thirty years and has translated novels and short stories by such writers as Eça de Queiroz, Fernando Pessoa, José Saramago, Javier Marías and Bernardo Atxaga. She has won many prizes, most recently the 2012 Calouste Gulbenkian Translation Prize for The Word Tree by Teolinda Gersão, for which she was also runner-up with her translation of António Lobo Antunes’ The Land at the End of the World (Os cus de Judas). Her translation of Medardo Fraile’s stories, Things Look Different in the Light (Pushkin Press) has been longlisted for the 2015 Best Translated Foreign Fiction Award.

“Let’s transform the self-defensive stance of ‘I’m not racist’ into a widespread, activated stance of ‘I’m committed to undoing racism in myself and in my culture.'” Bethany Webster discusses racism and the feminine.

Whatever Happened to Verse Drama?

Richard O'Brien examines the history of the verse drama, and asks whether the decline of blank verse has to be...