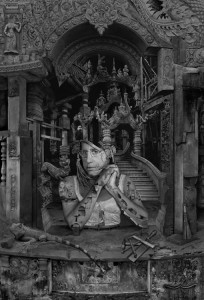 Can grass read? Or write? Did you ever see a dog that knew about books, about science? Did you ever come across a judgement worth making? Making out of what, exactly? Into what? I don’t want to learn, forget it.

Leave it to the kids. Leave it to people who still want to be doctors, who want to go around talking fancy and saving poor people’s lives. Us poor people, we just need to be poor and that’s that. Let me sit in my corner here in peace. Next to the stove, that’s the place for me. I’m fine. Did you ever see a fire go worrying about words?

Let the government give me my food allowance. Coupons for this, coupons for that – it all does the job. Milk from the ministers, parsnips from parliament. Me, I just want to be ignorant. Learn what the wind can teach me, know what I mean? Mindless as a mosquito on that pile of goat droppings over there. And no-one respects a pile of droppings more than I do. It’s chemistry.

Did you ever see anything prettier? The geography of the river, even when it’s all dried up, even when it’s full of clutter? The line in the dust, the dust left by the water? Well, did you? And what am I meant to use this workbook for – just to please you and the powers that be?

Just so the minister can say all the hard work paid off? But I ask you, is there any work harder than my hard work? Every day since forever in this back of beyond. Waking up with the sun, can you think of a better ABC than that? Looking at the sky and spelling out the chances of rain?

I know about dying by now. And I know about eating. Catching a guinea pig every now and then, munching on some reeds. Gnawing at the odd armadillo bone. Understanding when an itch is just an itch and not a sign of sickness. Give me strength!

Do I really need to know how to scrawl my own name? Scribble something down just to keep you happy? Please, Miss, be honest with me, what good does it do having my name on a piece of paper? It’s got no life in it when it’s like that, it’s got no people. Doesn’t whoever it is who’s behind the name count?

On paper I’m even more of a nobody than I am here, in the Valley of Jequitinhonha. At least here everyone knows me. Shouting over when they pass. Stopping for a chat, calling me Totonha. I hardly ever wear anything other than this or go any place other than here. I’m always the same person. And I’m free as a bird.

The way I see it, real wisdom is knowing how to read someone’s face. Right up nose to nose with whoever it is. I’m not afraid of highfalutin’ language – God taught me that. I just want you to leave me alone. I’ve got all the words I need. My words, words only the birds understand – know what I mean?

I don’t need to read, Miss. You can if you like. And ministers. And doctors. The president, he needs to be able to read what he’s signed. But me? You won’t catch me bowing my head to write.

Film critic Jay Sizemore reviews one of his favourite Marvel releases to date.

"Their bewilderment has intensified// The hollow was once again sealed with cement/ the next day it was much wider than...