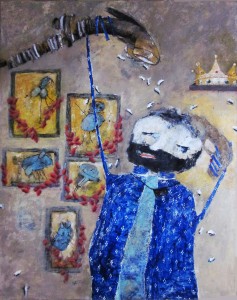 There was no place to walk. I don’t mean the only option was to walk on air or into the sea but literally, there was no place to go forward. Sure, I could have scrambled over the debris but then there was the huge crater to traverse. Even a decathlon athlete would not have made it over to the other side.

Click, Click. Another click. Not so fast—this is a medium format. Wind the film…9 seconds; set the shutter trigger mechanism…another 7…Nothing is moving. No rush. All the dead rats have been picked clean months ago.

Here comes a squad car. Silently it cruises the block, not once, but twice. I know what he is up to.

Another click. See the exposed wall over there—the cracks in the plaster are shaped like an agave plant. The wiring in the opposite side is irregularly shaped sunflowers. That jumbled mass of concrete columns with assorted wiring and steel rod foretells an invasion of silent Martians.

Another click. Here comes a squad car. Silently it cruises the block, not once, but twice. I know what he is up to. The bubble gum carrier stops at the shortest distance away. Non-threatening, but wearily, the guardian of the public trust advances. Better not to have the first words—let the man have his say.

¨Why, that’s a Rolleiflex! What model?¨

“I’ve got three of them. Well, you know what I have to say.¨ Warm-up introductions are over. Police business sets in.

¨Sure officer, I’ll move on.¨ I have just barely gotten the last shot in so there’s no loss in leaving now.

Two years later one of the photos is hanging in a contemporary art space. A man saunters over, looks at the one most popular of all photographs in the exhibition, and brushes aside the other onlookers. ¨Material evidence—that photograph’s mine,¨ flashes his city police detective’s ID, takes the photo off the wall and leaves with it.

Hardly noticeable in my photo is the edge of a woman’s garment—a woman callously murdered by a disgruntled lover. The photo becomes evidence in a murder trial. The man is convicted.

I feel violated. My private moment has become public in a way unintended.

Geoffrey Aronson is a former photography professor in the USA, now transplanted to teaching English to Mexicans in that country. Mr. Aronson moved to warmer climes in search of better cuisine, exotic Hispanic cultures and easy access to sand studded beaches. Formerly a teacher at the American Intercontinental University, he has upheld a lifetime tradition of seeking work at schools with long names, recently employed at the Universidad de Valladolid and Universidad de Oriente. He makes up for that by writing short fiction.

“This is the Port of the boat people/ After Dessalines and Duvalier, HIV and cholera/ After tornado and tremblor…” Weekend poem, to mark the anniversary of the Haitian earthquake, by John Robert Lee.

Author of the Month: Zuha Siddiqui

"Fiction possesses the ability to reveal stories that facts, figures and historical accounts tend to gloss over..." Zuha Siddiqui, The...