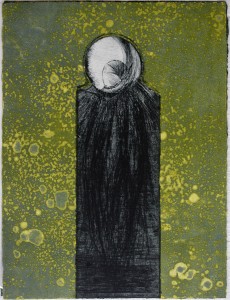 I’ve got a two euro coin burning a hole in my pocket. It’s way late into the night and everything is closed, but the coin is starting to burn my skin so I head out looking for a vending machine so I can spend it. The only vending machine I can find is the one at Hermannplatz that sells souls, and the only souls you can get for two euros are of heads of state.

Obama, Netanyahu, and Harper’s souls are all gone, and the only one left is Putin’s. My pants are starting to burn up, and I don’t want to have to walk home half-naked since it’s a bit chilly out, so I put the coin in the machine, and punch in my choice. Putin plops out and seems a bit dishevelled, and asks me what he was doing in there. I tell him that I don’t know. After you sell your soul to the devil he can pretty much do whatever he wants with it, and I guess the economic crisis has hit the devil hard too, you know, hence the vending machines.

When we get to my house I give him my pink flowered housecoat, and ask if he wants to watch a movie, which he does so we watch Ivan’s Childhood together and he cries all the way through it.
I take Putin’s soul by the hand and seat him in my little red wagon, and I start to pull him back to my house. I hadn’t really thought this through, and I’m not really sure what to do with Putin’s soul, but I can’t really leave him out to freeze.

When we get to my house I give him my pink flowered housecoat, and ask if he wants to watch a movie, which he does so we watch Ivan’s Childhood together and he cries all the way through it.

After when I’m tucking him into bed in the spare room, I ask him what I should do with him. He says that he wants to be re-united with his body, so they can grow old together.

First thing in the morning we go to the post office together and I buy an envelope big enough to fit a folded-up soul of Putin inside. I write a note to Putin that says, “Bought back your soul for you. :)” Then I say good-bye to Putin’s soul, and wish him well. I hope he makes it home alright.

Ambika Thompson is a parent, musician, and writer living in Berlin. She has contributed short stories to NPR Berlin, Fanzine, and Literally Stories, and has had her stories shortlisted for the Reader Short Story 2012, and the Fresher Writer Prize 2015 contests. She is also one half of the cello riot grrl band Razor Cunts.

Ambika ThompsonfictionStory of the Week

M. Lynx Qualey reports from the Palestine Festival of Literature