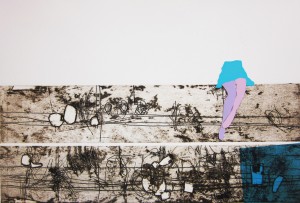 Once again the little white case for my earplugs had fallen from the useless pocket of my tank suit, so I headed out toward the pool area to find it. Ordinarily when I lose my case I circle the Olympic-size pool, surveying it until I spot it bobbing somewhere on the surface of the water. But this time I was just too lazy to. I washed off my feet in the footbath as required by law—actually once I did find the case in the footbath’s open drain, and a couple other times on the side of the pool. Anyway, I washed off my feet, picked up a kickboard from the pile under the GOD LOVES US banner and sat down on the edge of the pool. One way or the other I was going to get in a good swim.

A few lanes down a Christian Scientist wearing blue coveralls and street shoes was on his knees testing the water. I thought he was giving me a queer look. Did he suspect I hadn’t taken a nude soap shower? Was I supposed to be wearing a shower cap or something? Some of the YMCA’s rules weren’t all that clear actually, and I wasn’t in the mood to be yelled at. I watched him use an eyedropper to squeeze a little pool water into a test tube. The solution turned greenish brown. Now what did that mean? Jesus! The pool, a common bathtub, is supposed to be kept free of toxins by continuous recirculation, filtration and chlorination. But you wonder if you can trust the people who run this place. I guess you just have to if you want to get exercise.

Bracing myself, I slid into the cold water and stood on the underwater ledge in the deep end. At the other end, the shallow end, the Ladies’ Aquacise class was about to begin and the Christian Scientist was called to assist. With a flourish he delivered a bamboo pole, shepherd’s crook and ring buoy. Splashing to the beat of Christian rock, a group of twenty women—fearfully well-made women—were working to achieve their target heartbeat. Participants were led through a series of specially designed exercises which, with the aid of the water’s buoyancy and resistance, can help improve joint flexibility and mold God’s body. Some of the young Christian women had enticing figures. I should invest in a pair of those prescription goggles, I thought, so I can see underwater. That way I wouldn’t mistake the ugly ones for the ones I’d like to fuck…

Several other groups were forming in the pool area. Roll call had begun. Sister Bertha put the buddy system into effect, as well as a system of tagboarding to check who went in the water and who came out. “All bathers must have a nude soap shower,” she announced over the P.A. “Urinating, spitting or blowing the nose in the pool can spread disease to other bathers and is not permitted! And, except for seeing eye dogs, NO PETS!”

Bracing myself, I slid into the cold water and stood on the underwater ledge in the deep end.

My group was Gym ‘n’ Swim, a coed skills development group emphasizing stroke work, aquatic first aid and Christian standards of living. To prepare myself for my upcoming Social Security Disability trial, I planned to swim one mile. “EVERYONE SWIMS, EVERYONE WINS!” barked the Program Coordinator. “You will, you will, YOU WILL WIN!”

“You are gaining self-control! You are the master of your body!” She fired off a pistol and I began practicing my elementary backstroke. On the sixth lap, in the shallow end, the back of my hand brushed against some guy’s thigh or something and we both stood up. The man had a clipboard in his hand. It was none other—you’re not gonna believe this—but it was none other than my rehearsal lawyer Jack, with his pool buddy David at his side. David was munching on a pungent green steak and saying something to Jack. As he spoke, green pieces were falling out of his mouth and into the water.

“Okay, Frank,” Jack was saying to me, checking off several items on the clipboard. “So we’ve got those two points straight. Number three: Introductions. Now, I’ll be the judge and I’m going to fire some questions at you concerning your disability case. You with me?” “Sure.” “Okay… Are you single or are you married?”

“Single.” “Do you live alone or do you have a roommate?” “I have a roommate, Your Honor.” “And what is his or her name?” “Sally.” “And when you introduce your roommate to a neighbor or a friend, how do you introduce her?” “I introduce her as my roommate.” “As your roommate?” “As my roommate, Your Honor, or as Sally.” “Never as your wife? You never once introduced her as your wife?” “No, Your Honor, we’re not married.” “Uh-huh. And how long have you lived with this Sally, for how long have you not been married?” “Seven years.” “Seven years? Correct me if I’m wrong, Frank, but is the Court to understand that for seven years you have lived with this woman, and you have somehow managed to have abstained from introducing her as your wife? Not even once? Not even to your landlord? That is very abstemious behavior. The Court finds that difficult to believe. But that is what you allege.” “Yes, Your Honor.” “Court is adjourned for fifteen minutes.”

Jack was aware that if the Social Security Administration found out I was living with Sally as “man and wife,” they would assume she was supporting me, and my claim would be denied. “Y’know, Frank,” Jack said, splashing some water on his hirsute chest. “the judge might pry a little bit and come to find out that when the psychiatrist asked you to define the word ‘domestic,’ you answered, ‘Cleaning, washing the dishes, and fucking the wife.’ Fucking the wife? Now how do you plan to explain that one?”

Pieces of green steak were falling like bird droppings from David’s mouth into the pool. Each one landed with a little plop, and disintegrated in a green fizz beneath the surface of the water. I guess the pool had plenty of chlorine in it after all.

David HauptscheinfictionStory of the Week

"It is a long way. The way has been long./ You stumble at the gates/ whose flags and guards breathe...