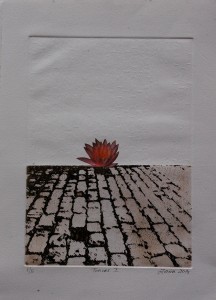 Autobiography of a Place I Want to Visit

I am a room, if by room you mean space, if you take a left from where your refrigerator stands with whatever was left over from the week and the week before that, and hit a roundabout not inside the refrigerator but outside of it going past that bed that’s a monolithic mess of everything from unwashed laundry to cheap lipstick to a tattered copy of A Brave New World on a bedsheet that’s so ancient now that moss must have grown on it and when you navigate through the undies, that is if you dare to, the top half of the orange cover of A Brave New World ends up in your hand, and all you can think of is a globe, a blue globe at your mother’s desk, going round and round when you would chance upon a particular country like Yugoslavia and would want to claim it by tapping on it with your palms, with your palms that you have not washed regardless of what your father told you repeatedly, and thought it would be apt to put a stamp of your mango-stained hand on Yugoslavia,

…going past that bed that’s a monolithic mess of everything from unwashed laundry to cheap lipstick to a tattered copy of A Brave New World…
the land of Mother Teresa who you still did not know and first appreciated when she passed away allowing you to return half way through school because school bus would not arrive due to Mother Teresa’s death, that Mother Teresa of the Mother Teresa award suspiciously given to an astrologer you hate, for he would force you to wear gems and jewels to appease the solar system while you are still unaware of the circumference of the globe in your mother’s room, the ungraspable, slippery globe, and worse that you are still unaware of your room, your room not this room that I am, your room with messy walls plastered with posters of naked people and sportspeople and sportspeople who are naked people, and the parts of the wall from where posters have fallen or have been torn off, the same thing, left with ugly pinkish spots, but you must still take the roundabout to reach me, but you are still standing and not moving, contemplating on eating stale green peas which are now yellow, still if you want to reach here you must look past your green peas and your beard like pubic hair to which the food is stuck, your beard like moss-layered bedsheet from where A Brave New World can’t escape, now you will take the turn or won’t is entirely your decision but here I stand beyond the refrigerator, stale food, yellow green peas, stinky beard, beard and bedsheet of moss, your mother’s globe and Yugoslavia.

The Story I Will Write about a Character and Hyacinth

In this story I will write about a character who will walk around a tiny artificial bush of plants trying to find meaning in an argument that happened last night, looking up and down the arrangement of trees while closely examining their colours and patterns and failing regularly in this endeavour; then the character will dream up a hyacinth flower and not call it that, unsure if that’s how hyacinths look—

In this story I will write about a character who will walk around a tiny artificial bush of plants trying to find meaning in an argument that happened last night
greyish black, a mound of petals, odorous so never plucked and offered as present to lovers—once in a while remembering the childhood where near the table at the study they would be kept potted with the character always imagining butterflies hovering over the pot, bees swarming over them in search of something, out with their tentacles searching, smelling, finding, failing and wondering in return if those are really hyacinths; yet the character would know somehow because of eyes, of ears, of nose that those are the flowers that bloom at night, never during the day, from there the character will conjure up the image of another travel within these travels: once in a public bus travelling without tickets and destination, walking inside it, scratching the surface of the ragged seats, sponge by sponge a wonder and thinking of absorption and thinking of patterns, refusing to vacate seat for co-passengers and thinking of hyacinths shred by shred in broken patterns thrown here and there and this and that way and feeling them while tearing them off, that until the point of arrival of an unknown destination, the time to get off, and someone would ask where’s the ticket to wherever the character has been going.

Debojit Dutta is a writer based in New Delhi, India, from where he runs a webzine called Antiserious. His writings have appeared in various magazines like the Himal Southasian, Kindle magazine, Motherland and the Northeast Review.

Debojit DuttafictionStory of the Week

"She’d watch her victims—only in a mirror—/ Their eyes held loose verbs from books she’d once read/ and read just...