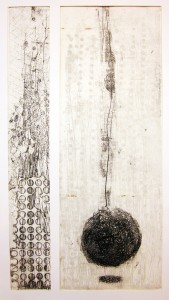 My hands were the thing. I could feel hot electricity in the bones of my knuckles. My pinkies were raw. The rest of my fingers felt like stoney promontories, immune to things.

The pack felt weightless. My ears were covered and my toes, lots of socks. Boots were larded with saddle soap. Everything felt like it could go. But my hands, shoved in my jacket, were hyperaware. When they started dying it was time to listen.

I could have turned back then, to that nice clutch of lights behind me.

The truck illuminated the snow well before I heard its rattling. It was a dually diesel full-cab, forest-green and scum-reefed with ice, especially thick around the wells. It passed by me, spewing slush, the swaddled sound of crunching snow, then stopped in the middle of the road twenty or so feet ahead. The brake lights made red twinkles on the powder and the pristine snow outside of the warm radius looked a half-drowned blue. The truck had an upper rack of fog lamps, but they weren’t on. The exhaust was camouflaged puffs for the sheeting snow—a retro television with a bad station.

Alongside of the truck I stopped walking and looked at it. My gaze was apathetic, I think. The windows were tinted or the interior was dark. Either way I couldn’t see inside. I stood a handful of purposeful yards off the road, oatmeal flakes hitting my upturned cheeks. The window slid down partway into the door. I saw brown hair and a half face that was underbelly color from the glowing dashboard instruments.

I didn’t say anything.

You want in? You just gonna stare me down?

I blinked some. It was the “Fucko.” It made it all different.

I detached from the pack. I felt its weight then, in my arms. Like another person on my back. I pulled back for momentum and arced it up into the bed. The bag made a nice bit of noise as it came down. Now my lower back felt it, uncoiling sorely in the absence.

The door cracked opened. He had leaned over to open it from the inside. I pulled the door edge all the way and had my boot on the foot rail when he told me.

You wanna brush off the weather?

The dually had those All-Terrain tires with the deep tread.

He watched the road like everything else, brown eyes just barely flickering. On the road, off the road. Just like he watched me. It was a birdy kind of attention he paid to things.

You gonna pull off the road?

So he idled in the middle there and I brushed myself off. Snow came off of my hat and shoulders. The icecrust was hoary and paned, broken only around the wrinkles and bends of me. I beat at myself for a minute to knock the bigger chunks loose. I was still beating when he told me.

We drove for awhile. We were high up there. It felt like a flight simulator with all that land moving beneath us but no real movement in the gut. His radio had all sorts of lights but there was no sound from the speakers. He had the heat on high. I took my hat off. The gloves too. They went in my jacket pocket. He turned the heater lower after a minute.

He wasn’t one of those. He wasn’t a mountain do-gooder suspiciously doing well for himself despite the crutch of a good heart. He had all the gear, piles of North Face and Sierra and Mountain Hardware and thick woolens in the back seat. He could have been a testing himself. Or he might have a lot of keys in his pocket.

He saw me looking back there and he caught my eye. He grinned.

Well that I didn’t need to know.

He watched the road like everything else, brown eyes just barely flickering. On the road, off the road. Just like he watched me. It was a birdy kind of attention he paid to things. It was the eyes. Like nystagmus. A friend of mine had nystagmus. The condition got worse when he drank. We tried out together and stayed on the ground.

We drove like that for a while. He kept his lights low to avoid that vanishing-point of pelting snow.

You have a gun? Or a sticking knife? A baton? Something. You got something. Somewhere close. Don’t you? Just in case?

He grinned at me. He giggled like a kid.

When he pulled up the top of the middle console his eyes stayed on the road and the edges of the road. It was an unopened pint of Chivas. He cracked it and tug a slug. He held it up to me. I took a slug too. I took a large slug, but I tried to do it slowly and quickly at the same time so I wouldn’t make too many glugs and seem rude. My lips were still thick and some of the liquor went down my beard and onto my jacket. I wiped at it.

He put the bottle between his legs.

What are you doing up here?

They cut roads this late?

I gotta make some places. Weather doesn’t really matter when it comes to these types of things. Neither do hours. They just need bodies on the ground to make it work.

To make it turn?

He glanced at me. Then back. Maybe he was offended about the Chivas. I had displaced a lot. I couldn’t tell.

Yeah. To make it turn.

We went on and the snow was getting thicker. The road was distinguishable from the side only because of the height of the accumulation on the outskirts. He had to go slow. Or he chose to go slow. Maybe.

I looked at him again. He face was smooth and assured with nice angles. Wiry and dexterous arms popped out of his fleece sleeves. His eyes were tired, but not sad. Relaxed. Fortified, maybe.

It always is a ways. I was born on my feet, you get me?

Yeah. Yes. But it’s late. You could have stayed. Baliers’s the town ahead. It’s smaller. Why didn’t you stay back there for the night?

You mean in the shelter.

Yes. I mean in the shelter.

I’ve been treated a lot of different ways in my life. I don’t like shelters. They’ll throw you the minute you want to talk to them like you ain’t broke.

Yeah. Like not special. Not touched. Maybe you don’t need a diaper to sleep in. They don’t like you if there ain’t nothing wrong.

He hadn’t grinned since I had mentioned his weapons. I had thought of him as the kind that grinned for punctuation or inflection. I felt weird now. Like maybe I wasn’t there. Like one of those phantom accident-people.

“I was standing in Priscilla’s garden and felt my body getting bigger… My legs and arms disappeared and I was rolling towards the fringed tulips.” Story of the Week (March 14), by Uršuľa Kovalyk. Translated from Slovak by Julia Sherwood.