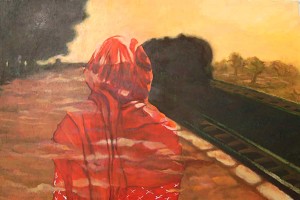 When it got unbearable I went to the mountains to look for drama. Not a good idea, man. I should’ve known I wasn’t the type, I mean, asthma and all and what with the air being thinner at 2,000 meters in the air.

Heck, I went out of breath every time the bus driver turned. Bloody chutia had fallen asleep when we last stopped in front of a landslide and everyone got off the bus to reduce the weight. He stayed on because he was going to drive over it. But he fell asleep with the engine on, and we stood outside for about an hour in the pitch blackness and possibly three meters each from a thousand foot drop because the Pakistani government did not believe in protective railings around vicious drops, or anywhere else for that matter. We stood there thinking he was probably calculating trajectory and angle of entry over the massive pile of rock and mud but really, the idiot was snoring. When someone finally had enough and went on board and poked him, the bus let out an almighty roar and lurched forward over the pile of rock and on to the other side where it stopped and the driver got out, looking mighty pleased with himself and asking everyone back on board. The chutia had probably planned it all along. I looked once over the edge, imagined spikes and stones and white tigers circling in the valley below, wheezed, and got on the bus to drool again on whichever fucker happened to end up sitting next to me.

It wasn’t a fucker, but a fuckeress, who went by the name of Nadia. She had long, black hair and was wearing a North Face jacket so she wasn’t broke or nothing and I’d seen her smoking a couple of hours ago at the rest stop so she was the farthest thing from being good for me. She also smelled like she’d just sprayed on deodorant. She was, therefore, the perfect cause of asthma. I’d thought all of this up before I’d said hi or actually even sat down, because the difference between expectation and reality was probably the only thing I lived for, that made life kind of interesting and stopped me from going full on emo every time a girl told me to fuck off, which was a lot. I do not ever want to get what I expect to get.

I said hi and she said hi and I said haha but couldn’t finish my sentence because I ran out of breath. Two puffs of my trusty gray Ventolin inhaler (which looked eerily green in the yellow light that glowed inside the bus and made the shiny plastic seats with plastic cushion covers glow blindingly red) I said hi again and she laughed. Perfect.

…the difference between expectation and reality was probably the only thing I lived for, that made life kind of interesting…

The sound of the Isuzu bus going over potholes made it very hard to hear but the she thought I was being funny, which was absolutely fine by me. But she said her name again over the course of the conversation which is how I remember.

I asked her where she was going, even though there was only one place it could be, because it was a bus hired by a company that took people on the mountain trek of their lives and beyond. She looked at me as if trying to see if I was slightly not totally in control of my senses so I laughed out loud “HA!” and looked outside the window at more darkness.

“Why are you going to the lake?” She asked.

This was my kind of girl. I waited for her to laugh but she didn’t so I liked her even more.

“To tell you the truth I’m actually going there to look for drama,” I said when I realized I could trust her because she’d be lost for good as soon as we got to Saif-ul-Muluk, the greatest lake in the history of the whole world as advertised in the company brochure.

“Drama, eh?” She turned slightly in my direction, towards the window. I loved the way she said “eh”.

Three months ago I was going to propose to someone before I got a text that said “I got a rishta, mom says to take it, getting married next year, won’t talk again.” And then silence. So yes, drama. I wanted to feel exactly as I’d felt that day. You have no idea, Nadia, no idea, what it felt like. But I’m not going to tell you this, yet, not till I’m sure you’re actually going to disappear. Because then, and only then, will this count as drama. Yes.

“Yes, drama.” I looked out the window again but it was just the same darkness with maybe a couple of trees in the distance which could just have been rocky things jutting out of a mountain.

She drooled on my shoulder all night.

We got to Naran or was it Kaghan or maybe neither of the two but it was a small town from where we were going to get into jeeps and get to the lake. Then we would camp there and stuff and trek to Aansoo Lake which was apparently called that because it resembled a tear drop and was, hence, extremely dramatic. Perfect.

The sun was rising when we got off the bus and we were treated to topi wearing Pathans who were lugging our luggage from the top of the bus onto jeeps. There was smoke coming out of our mouths. The white and gray houses all around were deserted because it was coming on to winter and everyone had moved south to the cities. Some idiot had brought a trolley bag along and was now being asked to rush to the nearby store and buy a proper backpack or stay in the hotel till the trek got back. He ran like rainbows on fire, because the white and brown and green mountains that surrounded us were worth losing sleep and life over.

Nadia stared at them and said, “I think I made the right decision coming here,” and I looked at her and said, “Yeah,” but for different reasons.

Then all around us there were mountains and shrubs, close and far, grey and brown. The jeep had two seats in the front and three or maybe four in the back. The driver and his son who had grey eyes and brown hair and who could not have been more than three or four were sitting up front. I wanted to ask the kid what he was doing in a jeep that drove on slivers of land that were in no fucking way close to being roads but he seemed so at home I felt like an intruder and kept my mouth shut. Beside me Nadia was looking out at the valley below us as we circled and circled the mountain and went higher and higher as breathing became harder and I reached for the Ventolin again and then breathed like a mad man in hell fire.

“At eight o’clock in the morning a piece/ of shrapnel burrowed its tick into the small/ intestine, like clockwork…” Poem of the Week (May 6), by Emily Webb.

"For me, writing is as essential as breathing." In our June Poet of the Month interview, Ana Luísa Amaral talks...