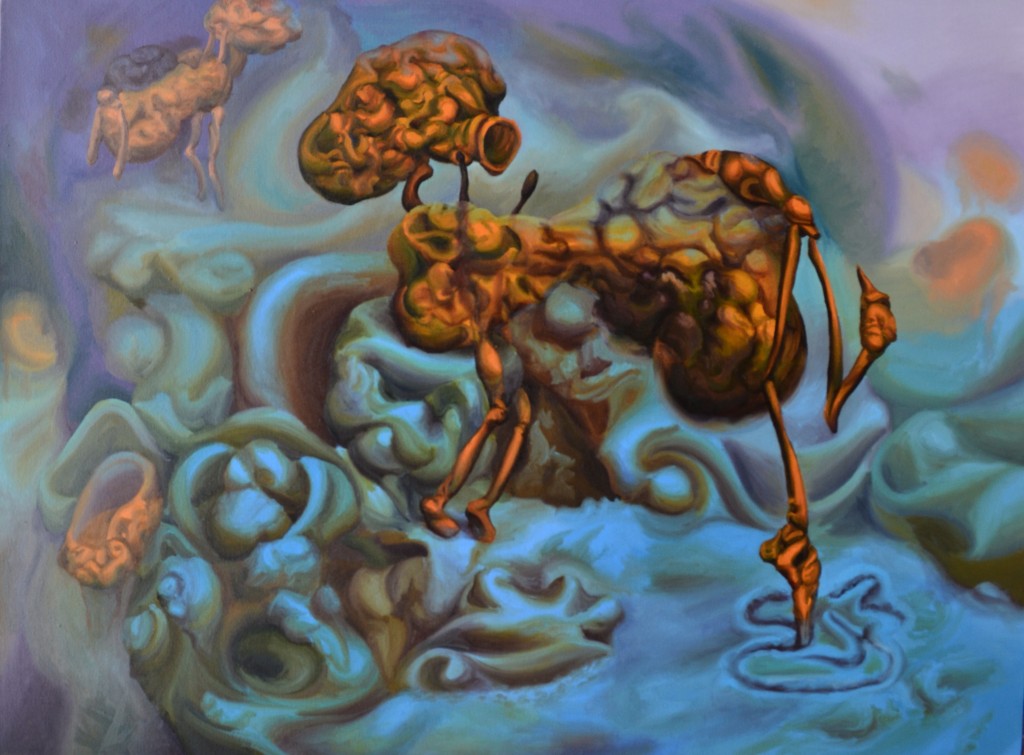 To Rebeca, poetry’s spur
After ‘Entre la necesidad y el scenario’ by Roberto Rosique
Death has now been born in this no-man’s land,
place of isolate rocks, of silences in which one’s voice cracks, and thought
splinters.
It has been born, painted in a hue of steel, its skin tattooed with loss.
Death which is a vile laugh emitted among stirred dust, a deaf face, an old cough
choking on each nostalgia.
Death as long as the desert’s horizon, sacred lightning bolt, blinding sword
beneath a copper sun.
It has come like the returning of ominous graves that make us regard the
shadow:
here, the same, reoccurring story of our Fall, the old specter which condemns us
to diving from the cliffs of nothingness like a fistful of souls already taken
for lost and lodged within that body,
that body of bodies dragged from the main plaza century after century, system
after system, credo after credo.
Flesh of lamentation.
Flesh of sacrifice.
Here, the wall which appears, the gates which dash our hopes, the confusion of
roads.
Here, the procession of silence in the yard where hunger chews an ear of corn
picked
clean of its kernels, and dreams
of gathering together the scattered remains of the mother,
of shaking off plague and shame from blankets,
of starting history anew, elsewhere:
Wherefore have we come here, to the place of grief we have come,
we have left behind the ancient refuge where the days, lasting longer each
moment,
witnessed the immolation of the sowing fields,
we seek a refuge, such is our motive for coming here.
Nothing held us back in the land from whence we departed.
Our heart weeps, and we suffer, inconsolable,
Because here, we should not live, nor have we received consolation.
Where have we truly come?
Here, our semblance,
the scene of our downfall.
Wind and exhausted limbs, visages rising in final protest against the dark gust of
wind.
You seek the land you lost, and your feet and your eyes, your tongue, your
throat, all proclaim to you its proximity,
because the land envelopes you, it has risen and it envelopes you with its dogs
and golden snakes,
downfall after downfall, its assails your breath, bit by bit, robbing you of your
sense, motives, it blots out your body,
the image which you are, and disfigures your visage with the blow of a simple,
huge insult.
Vicinity of death, and its myriad faces: beyond that threshold you are but a ghost,
a mere bulk moving off yonder, a shadow.
You have trod the land uniformed by an army of steamrollers, an empire of
dreams and haughty arsenals.
Your incursion is the closing episode of a contradictory gesture, and in your flight
we behold, as in a categorical mirror, the collapse of utopias;
we are the sapped tree of the hanged-man, and the wind which rocks it, we are
a barren steppe that breeds hunger and theft,
we are the mask’s scab on the imaginary Mexico,
and the buried mirror, we are a prayer,
deserted and insistent.

Eduardo Arellano was born in Zacatecas, Mexico, but produced most of his poetry while living in Baja California, where he was very active in the literary community. He died of cancer in 2004, at the age of 45.

Anthony Seidman has published poems and translations in such publications as World Literature Today, Nimrod, The Bitter Oleander, Beyond Baroque, Slipstream, The Black Herald Review and Ambit, among others. His most recent translation published is Salvador Novo’s ‘Confetti-Ash’, co-translated with David Shook. His second collection of poetry, ‘Where Thirsts Intersect’, is still available from The Bitter Oleander.  He lives in LA.

“When we lie in bed long enough,/ the boundaries of our bodies dissolve.” Weekend poem, by Amalie Smith. Translated from Danish by Paul Russell Garrett.

My Harsh Tears Have Brought Black to Its Knees

"I bring black to its knees,/... I make joy and sadness brawl." By Tseveendorjin Oidov, translated from Mongolian by Simon...