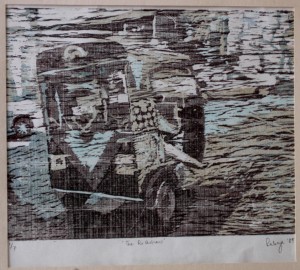 Manik looked across the street at the small queue of people forming outside the American Embassy. They were gathered together under the gaze of the row of palm trees that stood erect and tall within the high walls, like sentries guarding the red bricked fortress.

He squinted up at the guardians of the enclosure and wondered if anyone ever bothered to eat the clusters of green coconuts hanging precariously from the top of the tree or if they just fell to the ground and were swept away to be thrown into the garbage. That would be a shame. It had been a while since he had tasted fresh coconut water or bitten into the sweet white flesh hiding beneath the green shell.

It was still early in the day and there were only a handful of people milling around the entrance but he wanted to get to them before anyone else encroached on his turf. There was one woman in particular who showed up almost every day carrying a baby, but she seemed to be late today. It was strange how a crying baby made the foreigners give money without hesitation; they were always opening their wallets and bags and handing her five, ten and twenty taka notes. He had seen one of them give the woman a tin of baby milk powder. He was sceptical as to whether she had actually fed it to her baby; more likely she had just sold it. If he was lucky the woman and her baby had moved on.

Every now and then the foreigners going in and out of the embassy would give him some money as well, although not as often as the woman with the baby. He thought that he made them uncomfortable though one time a lady had given him a hundred taka note. She had short hair like a man and had smiled at him with big white teeth. He had never seen teeth that white and even. That was a long time ago and he had never seen her since.

As he looked on, a car pulled up and a young woman jumped out. She wore a blue sari and her shiny black hair cascaded down her back well below her small waist. She waved at the person inside the car, tossed her head back and laughed. People didn’t laugh much outside the embassy. They always looked worried, almost scared at the thought of entering the building. He wondered what lay beyond the red walls as he watched her walking towards the group of people.

He gulped down his cup of tea. The hot liquid scalded his tongue.

“Too late Asad Bhai”, smiled Manik, and slammed his cup down next to him on the rickety wooden bench and let out a contented sigh. Strange how the hot cup of tea managed to quench his thirst even though the summer sun was already bearing down on them with all its might. It hadn’t rained for over a week and the ground was parched. The dust had settled on the leaves and the trees in the street looked dirty and unwashed.

What he could really do with now was a cigarette especially one of those foreign brands, not his usual deshi ones that always left his throat raw but nevertheless felt damn good with every puff. Right now he was out of money. He could ask Asad Bhai but the man had done enough for him. It just didn’t feel right.

When Manik had first arrived in Dhaka he had been overwhelmed by all the noise and all the people. The city was heaving and at times he found himself barely able to move through the crowds. It was an ocean of nameless faces. But one thing he had discovered was that there weren’t many people like Asad Bhai, if there were he hadn’t met many of them. The tea shop owner had always been good to him from the time he had landed up in the Baridhara area and stumbled across the small tea stall.

It hadn’t rained for over a week and the ground was parched. The dust had settled on the leaves and the trees in the street looked dirty and unwashed.

Since then he had lost count of the number of times Asad Bhai had passed him a cup of tea or handed him paan or a toast biscuit and refused to take any money in return. He said Manik reminded him of his son. He had lost him a decade ago. Typhoid had seen to that. The man had a big heart and the last thing Manik wanted to do was to take advantage of his friend.

It felt like a lifetime since he had left home with nothing but his dreams, four hundred taka in his pocket and a determination to make something of himself. He didn’t want to end up like his father, working till he dropped dead from hunger and fatigue or his mother who had spent the last few months of her life beating her chest and shedding tears for his father and the children that had not survived their first year. Manik had watched her weep till there were no more tears left inside her frail body and she had followed his father to an early grave.

“I better get to work”, said Manik as he handed Asad Bhai his empty cup.

He bent down to pick up his crutches and winced. The pain in his leg was back and had been troubling him the last few days. Night times were even worse. He had been waking up in agony; a searing pain shooting through his leg but when he looked down all that he could see was his grotesquely deformed stump.

Things had not gone as Manik had planned. Life had got in the way of his dreams; life and a large yellow truck. He sucked in his breath and slowly let it out.

Asad Bhai looked at him with a frown on his pock marked face, “Are you sure you don’t want to sit for a few more minutes?”

Manik raised his hand and shook his head. “No, no, I’m fine…”

“Hmm,” said Asad Bhai not convinced. He swatted a fly away from the bananas hanging from a hook on the side of his stall.

“So what do you think about this new lot?” Asad Bhai said, pointing to the people across the road. “Who do you think is going shell out and who’s going to tell you to bugger off?”

Manik grinned at the tea shop owner, “Sometimes you’re too much Asad Bhai! If I could answer that I’d be a rich man.”

“I’m just asking, you’ve been doing this for a while so I thought you might have some sort of gut feeling…”

“No not really, it’s just a question of luck.” Manik paused to stare at the line of people. “Ok,” he said after a moment, “let’s see what kind of fish we have in our net today.”

Towards the end of the queue was a middle aged man wearing a dark brown suit. He had a shiny black briefcase in one hand and a mobile phone in the other. He checked his watch, looked around at his companions and then walked purposefully towards the security guard and said something to him. The security guard didn’t look very impressed and gestured with his hand to go back to the queue. The man looked as if he was about to say something but stopped and turned on his heels and strutted back to join the line. He put his mobile in his pocket where he exchanged it for a handkerchief and mopped his forehead and balding head.

the absurdity of the cosmos: 12 bolivian poets in translation

"Perhaps — is this just a fantasy? — the poets of Bolivia form one small part of a worldwide movement...