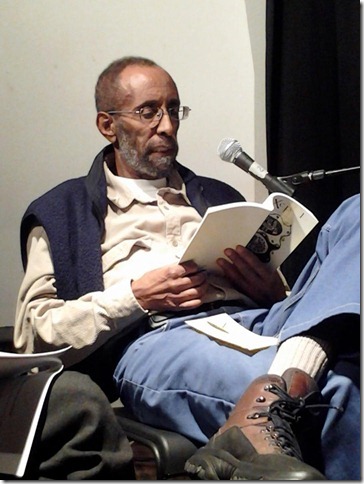 Poem to the Matrix

Sabean images gone, the syllabary stays behind
going this way, then that, before deciding on left to right…
leeching first on prophetic sleight-o’hand then on parting waves
then on redemption, here as elsewhere, shorn of compassion

the poem, rebus, sound, vow to the para-verbal
speech rooted in wombs adjacent to the Seat of Power
the Egzi-O, the Ill-la-Hu, the Wy…Wy…Wy, the Ouh…Ouh…Ouh,
the Om Ah Om
repeatedly re-incarnates. Or is not born at all

the Seat of Power, ever present at the play of light and
shade, crumbles where table, picture, printer, petals, lips or cheeks intrude,
& lovely time rides in on a whiff of baking bread, the softness of skin
And the sweetness of breath. Ah! how separation harbours yearning…

& rhythm becomes time…and matter moves…streaming
& speech reaches to image beyond expedient abstraction…(a poem?)
we, who have been fragmented by serif and sound-bite
who’ve covered our tracks back to the silence before the first scream
whose tongues can no more move the weight of jaded words
wait, though no one knows we are waiting (why?)
frittered sounds of Oromo, Amharic, Tigrinya, Somali
and the fourty-four fourty-four other tongues…(wherefore?)
how long pretend that life and death did not trade places
& this, the redemptive crucible and not the crotch-point of choices?

store the scream of fourty-four tongues tearing? (how?)
mind your syllables! my shattering is organic, marrow deep…
lie with me in pieces or do not speak at all
replicate the howl of the torture dungeon or say no more (poem?)

the learned barely glimpse their own noses
burnt-face Marxists have proved that, if proof there need be
extrapolating the future out of a past not worth the inventing
as if the past can be counted upon to count!

the past is merely the present limping (did I say that?)
(it takes more than good-will to walk backward straight)
The past has no dimensions, the past cannot see, cannot hear
barely be seen, barely heard – and heard to grant what we already have

later is now unlived, half-arse fantasized, a shadowless dark-alley trick…
(would you hire the dead & the unbegotten even as boundary markers
time’s territorial response to panic, a dog’s scattered piss
presence cat-napping and coming-to in fits and starts?)

why else would tectonic plates collide, stars implode (panic?)
and the acorn leave eternal encapsulation to stand millennia at best
(talkf of perverse ego!) and the bitch carry a yelping litter to term
when mother and pup will turn to everywhich master for love?

so the epistasis begins at the still point
and spreads in swells as the heart sinks:
beaches, Goddesses and Gods, disoriented whales,
kings and queens, priests and priestesses, all manner of demons,
dictators and controllers and toe-suckers and rulers
and attendants to their divinities and majesties and sanctities
for like the pup they insist they be attended to…
holy shit! all this radiance, all this horror, out of panic!

in panic I left…and in panic I launch me home
be it no launching be possible for the present be already here
impenetrable to aggression piety, yearning or to seduction…

it is hard core

the saint and the hero are unwelcome here (did I tell you that?)
their ulterior motives are a given
they lack the blinding speed that curls into immobility
the no-mind of the sperm, the ovum’s hospitality…

the drying river, the crumbling mountain, the sand that rides the wind
and the twice fourty-four tongues of the Horn do not recognise them…
they speak of ancestral glory, and tomorrow’s promise to the millennium
unaware that though they utter every name, there will yet be
unuttered names…

always. And tongues of flame will lick again
words like wet-land weeds will reach for the sun
the young women will smile for no reason at all
and silently ask, how did this all begin?

Solomon Deressa, born in western Ethiopia, is a poet, screenwriter, and essayist. His first book of poems, ‘L’jnnet’ [Youth], has been described as a turning point in modern Ethiopian poetry.

Editor’s note: These English “renditions” by the author first appeared in ‘Silence is not Golden: A Critical Anthology of Ethiopian Literature’, edited by Tadesse Adera and Ali Jimale Ahmed (Red Sea Press, 1995).

“…the way it swells/ on the branches/ like flesh on bone, ballooning/ and sweet…” Weekend poem, by Jenny Danes.

"Yes, I have walked your streets, I have made no strides./ Your secrets are endless, Addis!" Poetry by Fekade Azeze,...