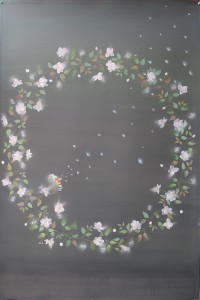 She was standing outside the store. His headlights illuminated her tall frame and dense stillness. Blonde hair hung over her shoulders. He noted the tatty jeans and the bag on her back before he turned off the engine and climbed from the truck. Walking towards her, he detected no movement.

“Are you okay?” His query elicited no response. He half expected her to disappear with touch, like old bones softening to dust. Her gaze settled on him. She smiled and said, “Sorry, what?”

Lit by the store lights, he saw she was younger than he’d first thought. Not yet twenty. He didn’t have too many years on her.

She nodded and asked his name.

“I’m Lucia.” Her face was small. Her eyes were dark. She shuffled and appeared shy before asking, “Where are you going?”

He said. “Wisconsin finally, but that’ll take weeks. You want a ride?”

“Yeah,” she said, “But to no place in particular.”

He had the feeling that she would be gone when he came out of the store, but she was still standing in the half-light waiting for him. He’d bought an extra bar and drinks, and two big bags of chips. She didn’t eat anything. In the cab, she sat back on her seat and stared out at the headlights streaming towards them as though afraid she might catch up to retreating darkness. She was quiet, inclined to fiddle with the radio, and talk in dribs and drabs.   He told her about the day he’d stood looking at his mother’s back. He’d watched her elbows push against cotton and had no idea that it would be his last day to see her washing dishes and smoking. Every few minutes, she’d dry her hands on a t-towel and lift the cigarette that had been wasting away on the ashtray. His mother didn’t turn around, though she knew he was behind her. He could tell by the pulling back of bones and straightening of shoulders.

It would have been nice if that really was how it went, the confident son nodding. But the more he fought against his background, the more he remembered the boy with dark hair falling over his eyes and shoulders slumped, saying, “Mom?” That boy left school without a high school diploma and had to sit his CDL three times.

“Good luck out there,” his mother said. The ensuing breathe out her nose, even without the sarcastic edge let him know what she meant, “You’re not going to last.”

Six weeks later, he finished his first haul. His body felt like it was something he had to drag around with him. He docked his empty truck and his body refused to turn for home. He stayed in a friend’s house for a few days, but was worried that his mother would phone the company to ask if her son had returned. If she did nobody told him. Still the idea of her inquiry made him get a job in a trucking company a State over in Ohio.

She was quiet, inclined to fiddle with the radio, and talk in dribs and drabs.

He couldn’t describe how his mother’s arms had hemmed him in. Her stiff fingers had stabbed at the words on the page and had attacked his shoulder when he tried to tell her the letters weren’t clear. While his father had been there, she’d whispered, “I’ve done everything I can. He’s just plain stupid, that’s what he is.” For a long time, Anderson thought these nocturnal murmurs had made his father leave.

There were four in her family; Lucia told him, an older brother and her parents. She liked none of them and didn’t care when her mother kicked her out. “Why did she kick you out?” he asked. The silence pulled the music in and swallowed the clearing of his throat.

“Because of a boy,” She finally said, “No, a man, he was older.” She shuffled in her seat as if pushing this older man out the door, and said, “I stayed with my friend Diane and her mother for a while. They didn’t tell me to leave, but I knew they didn’t want me around. Diane used to come straight from school but she stopped doing that, and her mother hardly talked to me.”

When he asked why she didn’t go to school, she shrugged and told him that didn’t matter anymore. For days he drove through her smells and sounds, the light breathing of her sleep and the deep wakefulness of her thoughts. They’d stop to get something to eat or quick stretch of the legs and a wash. At night, he gave her the bed at the back. He slept lying across the seats with his lumber jacket on top. Her scent made him moan in the dark.

Rain was falling on the window when Lucia said, “I need to get out of this truck. Do you think we could stop for a night and get a bed?” He glanced at her. She was leaning sideways. Blonde hair lay limp on her shoulders and her grey eyes were stark.

In a murky motel room with hard sheets and dripping taps, they lay together. Anderson had had one girl before. It had been quick affair at the back of her house. The tawdry pull up of his pants afterwards had shamed him. With Lucia, he took his time. His fingertips gave way to a palm, his palm giving way to lips, until he couldn’t stand it anymore and needed to be inside her. He couldn’t get enough of her after that. During the day he’d breathe in their intimacy, and exhale his ache in run down motels where the carpets smelt of dried soap and the curtains were heavy with dust. Sometimes with daylight peeking in, he’d park the truck and touch her until he was ready to burst.

After three weeks of driving together and four weeks left of his haul, her bouts of nausea started. She pulled at her belly, as if she was one of those Russian dolls his mother used to have in her sitting room. He hadn’t been back to his mother’s house in two years, refusing to lay himself under her disappointed gaze. Still he thought of her when Lucia clawed at her skin and preferred Lucia’s madness which spread over them for days, to his mother’s focused and sane shake of head and her deliberate jabs for him to concentrate.

Lucia’s bursts of anger finally dwindled to a trance-like state of fatigue but her nausea stayed steady. He had to leave her in a motel in Tucson. He made sure there was enough to eat and drink for three days while he took off to finish his haul. He sweated the whole time they were separated. Whenever he closed his eyes, he pictured the room vacant and her walking aimlessly until the next driver came along. He imagined another man inside her, feeling his baby, taking bits of him away.