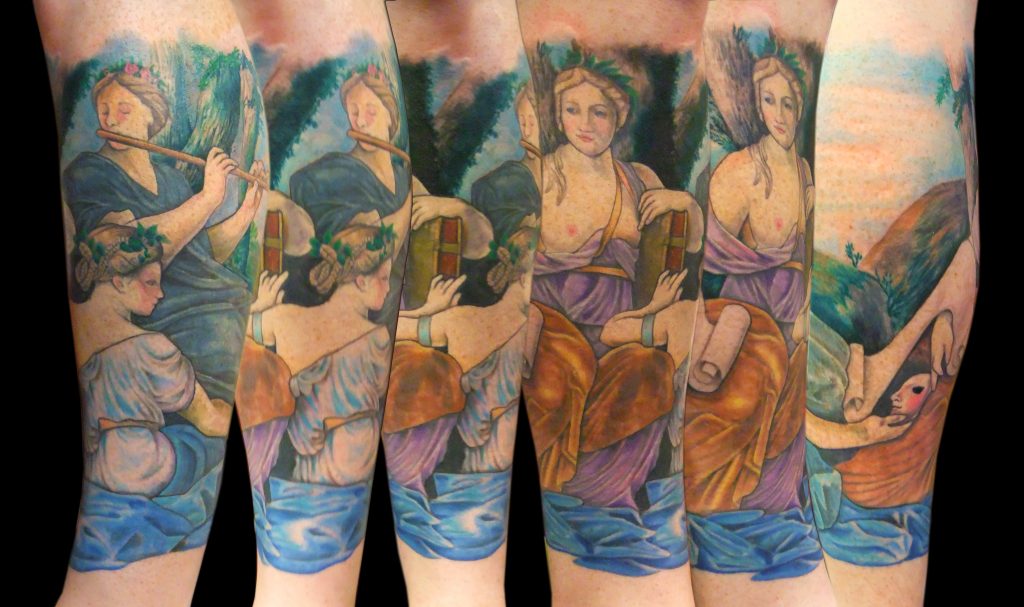 The Muses by Andrew Sussman. Image courtesy of the artist.

A taxi swerves and cats scatter as I pass by sellers hawking flowers, their fragrance cloying in June’s humid air. Up ahead, Rita waits near the walking bridge that looms over four lanes of traffic and a median on Huanghe Lu in Dalian, China. Rita’s given name is Shuhan but chooses, like most of my university students, to be called by her self-chosen English name. So, here stands Rita like a sunflower: strong, sturdy, bursting with seeds of intelligence. She will be my interpreter today when I interview a female tattoo artist.

As we walk down the street, Rita observes that people stare at me. I remark this occurs often, but I have learned to ignore it. This is the truth, mostly. As an introvert, the attention leaves me weary, particularly from people who literally stop and gawk at the foreign-ness in front of them. Some take my picture with or without my permission and others want to be in the picture with me.
When I arrived in Dalian last fall, I was surprised at the number of people who had tattoos, for I thought that the Chinese viewed them as a consumeristic endeavor undertaken by those navel-gazing Westerners, and as Josep Marti claims in ‘Tattoo, Cultural Heritage and Globalization’, after the communist revolution, the government prohibited tattoos because, among other reasons, they symbolized individuality at a time when the government attempted to homogenize the people of China (not only through forbidding tattoos but also through forbidding the wearing of cultural dress — hence, the blue or grey pants worn by both women and men)[1]. My curiosity was piqued: Who are the people getting tattoos? Who is doing the tattooing? And, are there any female tattoo artists? In other words, is the tattoo world in China dominated by male tattoo artists like in the US?[2] Or, has communism leveled out the playing field? As a tattooed person myself, I’m also intrigued with how people express themselves through ink — soul-surfacing skin designs, according to Koré, my tattoo artist back home in Minneapolis, Minnesota.

Rita and I confab briefly about the hot weather and then walk alongside Huanghe Lu toward our destination, Gold Wire Tattoo, picking our way among the sidewalk bricks that seem to swell in the heat. Sweat forms a river source between my shoulder blades and runs down my spine where my jeans’ waistband soaks it up. I feel the sunscreen I put on earlier slide off my face as we pass by a side street that my colleagues and I call Eat Street. Crowded vendors line either side selling a farrago of steaming Chinese fare from chăofàn (stir-fried rice) to chòu dòufu (stinky tofu – a well-earned moniker).

As we walk down the street, Rita observes that people stare at me. I remark this occurs often, but I have learned to ignore it. This is the truth, mostly. As an introvert, the attention leaves me weary, particularly from people who literally stop and gawk at the foreign-ness in front of them. Some take my picture with or without my permission and others want to be in the picture with me. I wonder if I live up to their expectations of what the West represents to them.

Rita, still as fresh as we began, and me, one pound lighter through sweat loss, arrive at the corner of Huanghe Lu and Xinan Lu, an intersection and overpass revealing the congeries of Chinese travel: farmers’ trucks hauling vegetables bumble awkwardly behind sleek, luxury private cars; buses displaying a mishmash of faces, limbs and packages pressed against glass compete with taxis carrying two, three and sometimes even four fares; and lumbering down the outer lane of Huanghe Lu is the trusty 101 trolleybus, its arm-like pantograph clasping the guiding rope of overhead wires as the driver honks at scurrying pedestrians who don’t heed traffic lights. The biting scent of diesel and plumes of black smoke fuel the pandemonium.

To the left stands Gold Wire Tattoo housed in an unassuming block similar to other blocks crammed throughout Dalian. The shop is painted black with red and white Chinese characters, along with Latin letters and phone and QQ (instant message) numbers painted in white. Rita and I walk over to the shop and cross the threshold where I expect to enter a cooler atmosphere but instead I am met with more humidity. My sweat glands go into overdrive.

Mengmeng, the 27-year-old pseudonymous tattoo artist and owner, greets us. She looks at me under her diagonally cut bangs as Rita introduces us. Mengmeng and I shake hands — she with her hand slightly bent at the knuckles, so I’m only clasping four slim fingers and me with my firm, full-fisted USA handshake. A Chinese handshake regardless of gender surprises me every time, reminding me of other ways, subtle ways, to greet people. Although Mengmeng’s handshake fits in with the stereotype that all Chinese people are quiet and demure, many are anything but, especially in northern China. People smack their food, talk loudly in restaurants and don’t lie down easily when wronged. A case in point is my friend whose cell phone was stolen at the market. A vegetable seller alerted her that the young man running down the street had just lifted her cell. She took off after him, and after she had caught up with him, she grabbed him by the sleeve, spun him around and punched him in the throat. As he stood there stunned, she yanked her phone out of his hand and walked back to the market. 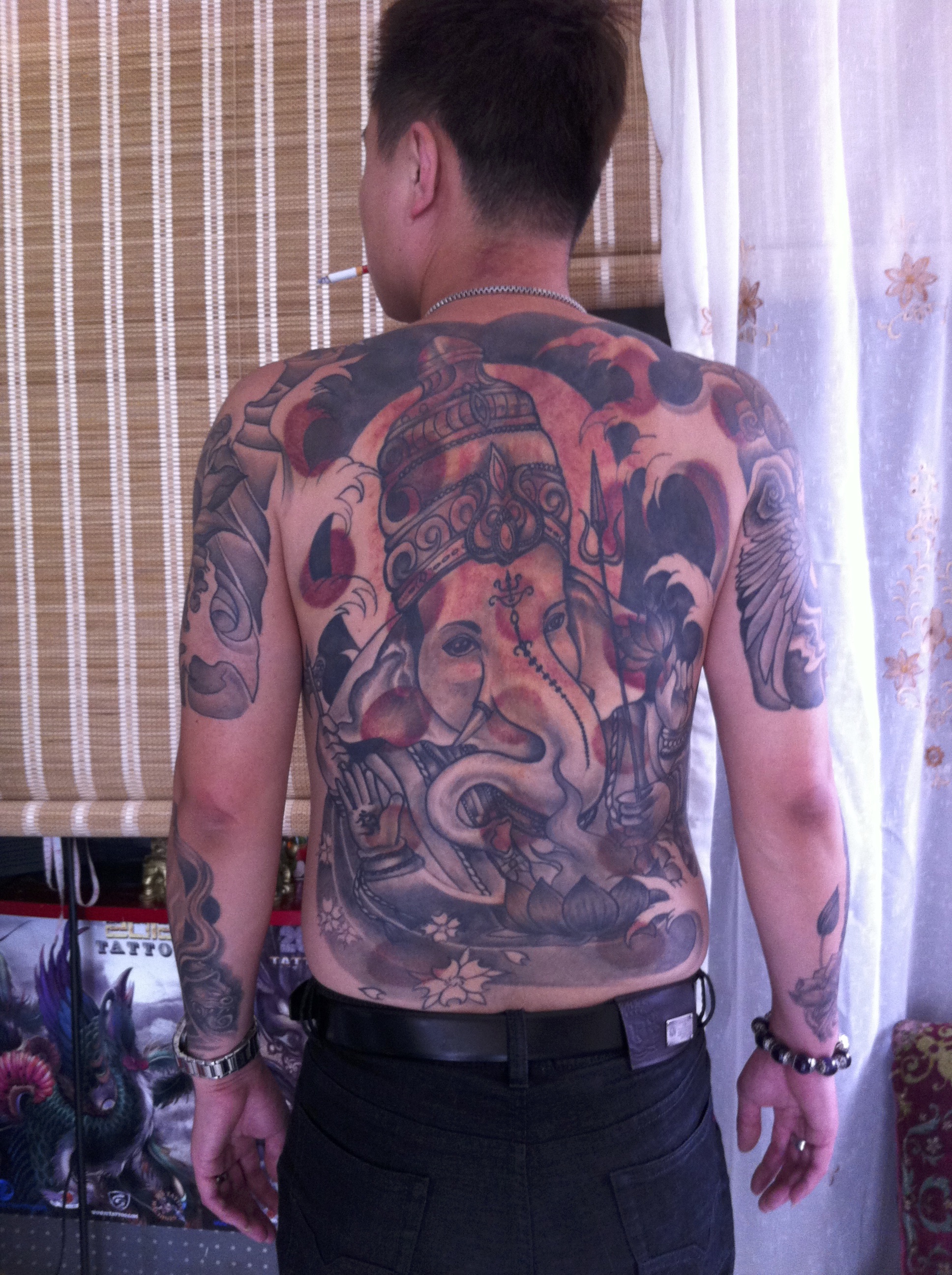 In the tattoo shop, I notice a man obscured partially behind a bamboo blind smoking a cigarette, so I inquire about him. Mengmeng offers that he’s a friend and beckons him to join us. The friend emerges from his cocoon, shirtless and sporting ink. I ask to take pictures of his tattoos by pointing to my phone and then to his tattoos while Rita interprets my request. He bobs his head in approval — a small smile on his lips — and turns around to display a full black and grey back piece of the Hindu deity Ganesha complete with a lotus flower and embellishments. Deep red rings from a recent cupping pock his tattoo imbuing the deity with a rubicund glow. After I take pictures and thank him, the man gives a quick nod and along with his cigarette, vanishes back behind the blind.

Although this is Mengmeng’s business, her friend might be in charge of it. In China, female status is comparably lower than female status in the United States, so I would not be surprised if this man pockets most of Mengmeng’s earnings. One of my experiences of my female status in China was when my male friend visited me. Whenever I paid for taxis and dinners, the change was always given to him.

Rita and I settle on a vinyl couch while Mengmeng sits on a doctor’s stool and shares her humble entry into the tattoo world. Her story echoes that of other tattoo artists’ — art major at university, drifted toward tattooing much to the chagrin of her parents, apprenticed (unlike other tattoo artists, solely on human skin and not fruit) and then opened her own shop. Presently, she also mentors aspiring tattoo artists. She began tattooing at age 20 before she got her first tattoo at 21. Pushing up the sleeve of her left arm, she shows me a lotus flower outlined in black that she had tattooed on the inside of her wrist.

“Her practice is about exploring herself, and she uses numerous tools to weave her narratives.” Shameen Arshad interviews artist Alia Bilgrami.