When I ask about her influences, Mengmeng cites Bao Luo and NY Ink. She also studies videos of Kat Von D tattooing to improve her skills. I ask if she’s heard of Ting, a well-known tattoo artist working in Shanghai, but she hasn’t. This surprises me because I thought Ting’s presence would be stronger in China than elsewhere. For now, Ting’s popularity might just be in Shanghai, with expats in China and in the tattoo community outside of China. 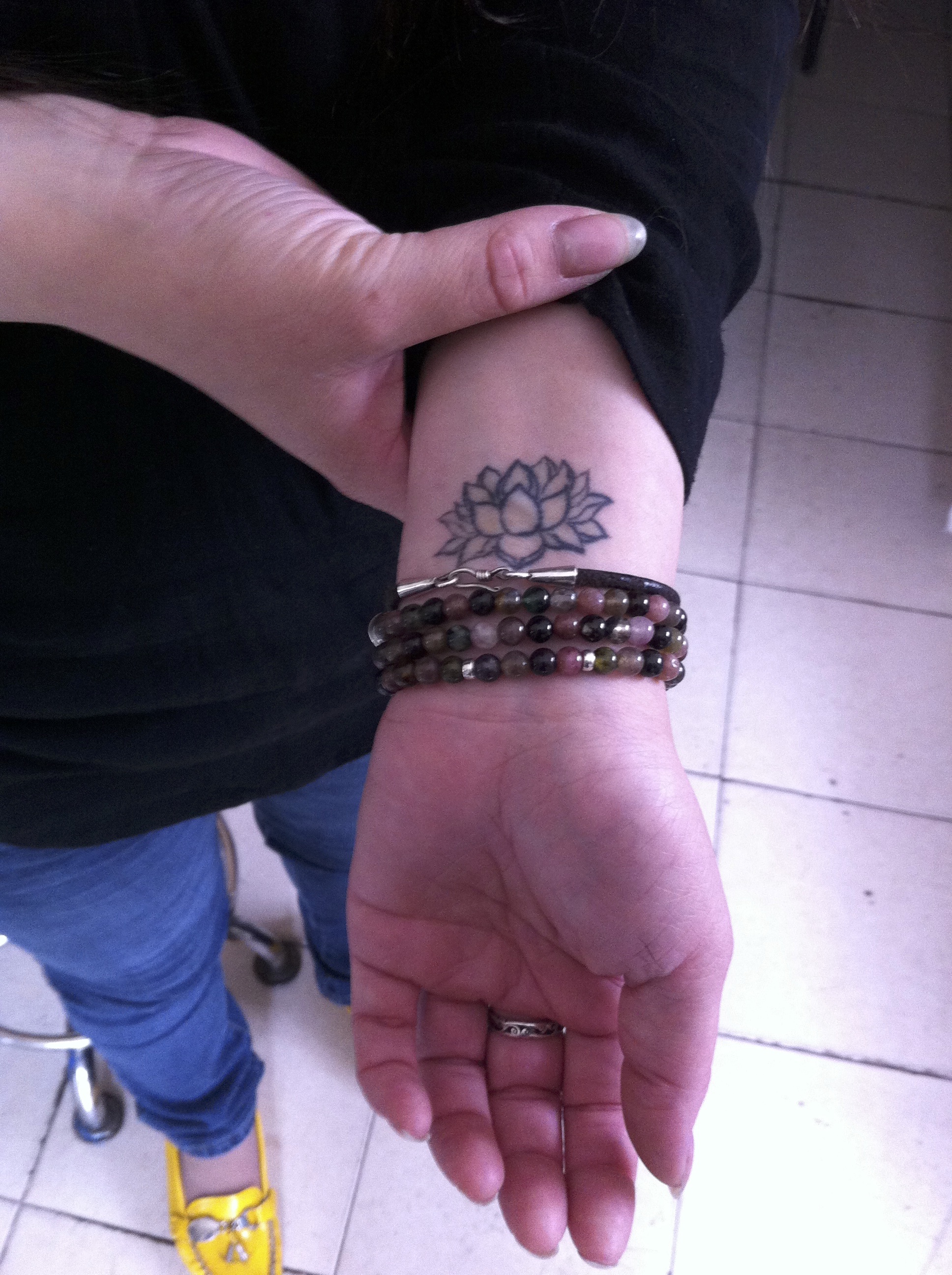 Sensing an ebb in Mengmeng’s nervousness, I ask if I may take pictures of her shop. With her approval, I frame a corner of the small shop opposite to where Rita and I sit.  Crammed shelves hold, among other sundries, bottles of colored ink, a red and white Chinese fan, a blue electric clip fan, a large pink box, notebooks, binders and a toy pony. The workstation consists of a laptop with a drawing pad propped behind it, and in one corner, a symbol of good fortune, stands a vase containing several lucky Bamboos from which dangles a Chinese knot, a red square-shaped looped pattern with a red tassel. As I look through the viewfinder, I notice a seeming disorder of tattoo supplies in a cramped space, a contrasting image of Koré’s well-organized tattoo shop in Minneapolis. Where is the spotless counter with organized drawers containing gloves, ink and pre-sterilized needles? Where are the sink, antibacterial soap, and paper towels? The comfy, hygienically clean chair for the client? The autoclave to clean the tattoo machine? I try not to judge what appears to be a lack of sanitary conditions brought to the fore by Mengmeng’s friend’s burning a cigarette that periodically appears and disappears from its ashtray, just visible under the bamboo blind.

Decorating the wall are Mengmeng’s drawings of Asian people with traditional Asian tattoos. A deeply shaded pink Koi fish swims, twists and splashes its way through blue water; lighter shade pink peonies with green leaves bloom and arc their slender stems; and a stately, vibrant blue peacock spreads its feathers like an elegant Chinese fan. All of these images invoke a glimpse into the bygone era of dynasties and myths that vanishes abruptly when I pan my camera over to a utilitarian red plastic stand.

Now we’re at the other corner of the shop where I spot what looks like a machine under a white, factory-lace cloth. After dabbing sweat off my face with my sleeve, I ask what it is. Could this be the autoclave? When Rita interprets my curiosity about this mysterious object, Mengmeng frowns and lowers her head. I’m confused by her reaction. I encourage Rita to ask again, but Mengmeng demurs. Despite my concern that I might be seen as the pushy American, I put Rita in the uncomfortable position of asking Mengmeng once more about what lies beneath the lace cloth. Mengmeng relents and discloses the machine’s purpose: tattoo removal. “Many people come in to get their tattoos removed,” she says, “for a variety of reasons.” Sensing her discomfort, I decide not to ask.

As if on cue to break the awkward moment, a Pekingese, a common sight at many shops, emerges from the back and waddles across the floor. It languorously lies by the entrance where the sounds of the streets permeate the little shop. Maybe this doggy will nab a customer while I’m here.

While traveling around Dalian, I noticed that the few tattoos I’ve seen were black and gray or black and dark blue, so I mention this to Mengmeng. “Yellow skin,” she claims, “is not good for colors because colors might darken. I seldom use color.” I can’t help but think of the politics of skin color in China where bleach is mixed into lotions, creams and facemasks as naturally as coco butter and aloe into other beauty products. Upon my first week in Dalian, my colleague warned me that when shopping for face cream to avoid products containing bleach unless I want my “lips to disappear.” I also consider the bleached faces of some of my female students and the ghostly middle-aged women standing at bus stops weighed down by grocery bags or the young, pale upper class women floating through the shiny aisles of a high-end department stores. Skin lightening, rooted in Asian culture before Western colonization, mixes powerfully with the Western beauty ideal, as suggested by Li, Hyun, Belk, Junko, and Bahl in ‘Skin Lightening and Beauty in Four Asian Cultures.’ In essence, the authors assert, Asian white skin increases desirability. [3]

Is this recent increase in tattooing a type of postcolonial skin bleaching, or a chop stamp on a cultural practice, which predates the existence of my country? Marti notes that the Li females of the traditional Hainan not only were tattooed but also did the tattooing. These tattooists were either part of the family of the young female being tattooed or known within the community for their skill. They tattooed young females in stages and the final one signaled to the community that these girls had now entered womanhood, which was cause for a celebration. However, under communism, tattooing became taboo and to ensure Li females abstained from this practice, the government also told them that the real purpose for the tattoos was to make them “ugly,” so they wouldn’t be kidnapped. [4]

Maybe the rise in tattooing is a confluence of both a type of postcolonial skin bleaching and a cultural practice as the young Chinese negotiate Western influences and wander through a once forbidden cultural landscape. A negotiation that involves saving face in a global world where the Chinese government plays a frenzied game of catch-up to restore their country’s former position as the “most powerful country in the world,” a sentiment some of my students have informed me about China’s past and its future.

I show Mengmeng a colorful peony tattoo on the inside of my left forearm. She bends her head over my arm, and I sense her artist’s eye assessing the work. She comments on the “vibrant” colors and how “alive” the peony looks. I ask her what colors are traditionally Chinese. “Dark blue and black.” Are any of the designs that you or your clients create considered traditionally Chinese? “Not usually. Japanese or Indian [Buddhist] culture is common or when clients go abroad they want tattoos from that culture.” Her comment reminds me of the academic arguments on appropriating aspects of another’s culture through tattoos back at the university in the US where I had previously taught. While this argument has some merit when viewed through a postcolonial lens, tattoos can be an expression of what we’re drawn to. A former white male colleague identifies with Buddhism and wants to express his spirituality through a tattoo. A woman I know gets a tattoo wherever she visits, for this is her memento. My peony tattoo, which was tattooed before I left for China, was to represent my forthcoming experiences in China, although for the Chinese the peony represents wealth. Many cautionary tales abound when one ventures into another culture via ink, as with NBA players and their Chinese character tattoos. The players think the characters mean one thing, but they mean another or in some cases, nonsense.

“Smash open all the foretellings, retellings/ and untellings that this city can boast.// Smash open its red cement floors, rain-glittering/ cobblestones…” Weekend Poem, by Nandini Dhar.