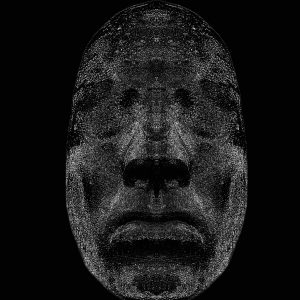 Marius Beck had been big, in both connotations of the word. And he still was, in one sense, even though the oldest pair of pants that he still used once in while had gotten kind of floppy around his once-even-more-substantial rear. But he could still fill out a car seat, and one of the big American ones at that. When he sat down, he sat. And that meant, among other things, that he couldn’t turn around. There were too many immobile kilograms involved.

This made it difficult to drive in reverse, because he never got used to using the rear-view mirror, let alone the side mirror, for that matter. When they moved into the new house in the extension of the housing development (the lots in the original development weren’t large enough), after a week he had gotten the mason to demolish the back wall of the garage and extend the driveway around the house, so he could leave home without going in reverse. It helped protect the house, the landscaping, and the flagpole. But then the house ended up sitting more or less in the middle of a traffic circle. He did have the driveway pavers laid somewhat artistically, so it didn’t end up looking so bad. And at the same time he was able to demonstrate that he was still an industrious and practical man.

Here it must also be said, that Marius Beck and his wife don’t live on the farm anymore. It was sold – and sold out of the family. It’s best not to mention it.

Their farm wasn’t just one of the largest, it was the second largest within several neighboring parishes. And since the owner of the largest one stretched his interests across the region, not to mention nationally, it was Marius Beck who had been the prominent one in their community, was on the council and everything. He had been chairmen – if you can say it that way. He had been chairman several times over.

It was the chairmanships that he missed these days. His leadership and delegating work on the farm had dwindled the last few years. It was like there wasn’t enough to sink your teeth into with just one farmhand and a livestock manager. He missed those council meetings and delegate meetings; things with meaning, having responsibility.

He missed the contact with other important men, missed trading handshakes with the region’s parliament representatives when they met in Karup or Kastrup, missed having the chance to contribute an intelligent and well-thought-out remark. He started to feel so alone that sometimes he started chatting with people he met by chance on the street – even people that he, in days past, wouldn’t have given the time of day: newcomers, the lower class, people like that.

He was going to be 80 soon. That would have to be planned quite carefully, if his reputation was going to be preserve and his respectability extended into a brand new decade.

The list of invitees was complete, Helga figured. She sat at the kitchen table with a notepad, and there had been a long pause, almost a silence, from the adjacent dining room, where Marius lay on the sofa, planning. She counted. There were 70 names – and many of them were now single. So there probably wouldn’t be more than 110. It wasn’t like it used to be, back when their generation didn’t take up so much room in the local cemeteries.

“I guess I’ll have to go out and buy some cards,” said Helga.

In a somewhat long-winded manner, Marius explained to this member of the female species, that if the old editor were still there, and he had gotten an invitation, then the newpaper would have known well in advance that there was an upcoming birthday they ought to do something with.

He cleared his throat in there. It made the sofa creak. It was pretty old and didn’t match the new dining room furniture at all, but Marius couldn’t be persuaded to get rid of it when they moved from the farm. Now it creaked some more. He must be getting up.

He appeared in the door frame. “It’s a shame we don’t know the editor,” he said. “If it was the old one, we could have sent an invitation.”

Helga remembered the old editor well. They had been with him a couple of times, back when Marius was still one of the newspaper representatives, unless it was the board he was on. It wasn’t always easy to remember if it was one thing or the other that got him out of the house. Sure, she remembered the editor.

“But I guess we can’t,” said Marius, almost to himself, but still directed enough towards Helga that it seemed natural for her to respond, “What can’t we?”

“Send an invitation to the editor,” he hissed.

Marius made a sound that wasn’t meant to be complementary. “The new one, of course.”

Helga couldn’t see why they would invite the new editor, when Marius didn’t even know him. She said so. They were in the kitchen, where she was usually the one in charge.

In a somewhat long-winded manner, Marius explained to this member of the female species, that if the old editor were still there, and he had gotten an invitation, then the newpaper would have known well in advance that there was an upcoming birthday they ought to do something with. You know, for their own sake, they have to follow the important events going on in the area, and sometimes they need a little help.

But the new one? No, they probably couldn’t. Marius sat down heavily at the table and began waiting for his coffee. Helga said, “You could always invite schoolteacher Krogsholt. You know he contributes to the paper.” Marius mumbled something about “that twirp of a teacher” – he and Helga had of course always been supporters of charter schools, and he was even on the board of one, back when there was one here, and that’s why they never held schoolteacher Krogsholt – the public school teacher – or the principal, in very high esteem. But the more he thought about it, the more he thought that it could still be a possibility. Krogsholt was a local, and they had been with him at countless events like golden anniversaries and the like, and he could sing with the others when the songs were handed out. And read telegrams, maybe.

Marius nodded. “Go ahead and send Krogsholt an invitation.” The rest of his statement kind of got lost in the chaw with which Marius occupied himself while the coffee maker was brewing. But it wasn’t necessary to hear every word to conclude that he seriously doubted Krogholt’s mental faculties in this regard.

A couple of sips into cup number two, Marius said, “You’d better write them today.” And after coffee, Helga made her way to the town center to buy appropriate invitations and stamps at the stationery store. Marius stayed in the car around the corner. It was a no parking zone, but if he kept the motor running, no one was going to come and say that he was breaking any laws. Some cars did get backed up, and there were also a few childish hotheads who honked their horns. Marius pretended he didn’t notice. It wasn’t his fault they didn’t know him. In a way he enjoyed the commotion, and welcomed Helga back without the least sarcasm. It made her wonder. From inside the store she could hear that the street traffic wasn’t moving along at its normal rhythm, but still she had taken her time, looking at a couple of storefront windows. Maybe she should get something for the birthday party.

Marius said, “How about a little pick-me-up, since we’re in town.” And he got the vehicle moving, drove forward a couple hundred feet, then turned left into the hotel parking lot, right in front of the city bus that, luckily, had its brakes in good working order.

"My curiosity was piqued: Who are the people getting tattoos? Who is doing the tattooing? And, are there any female...