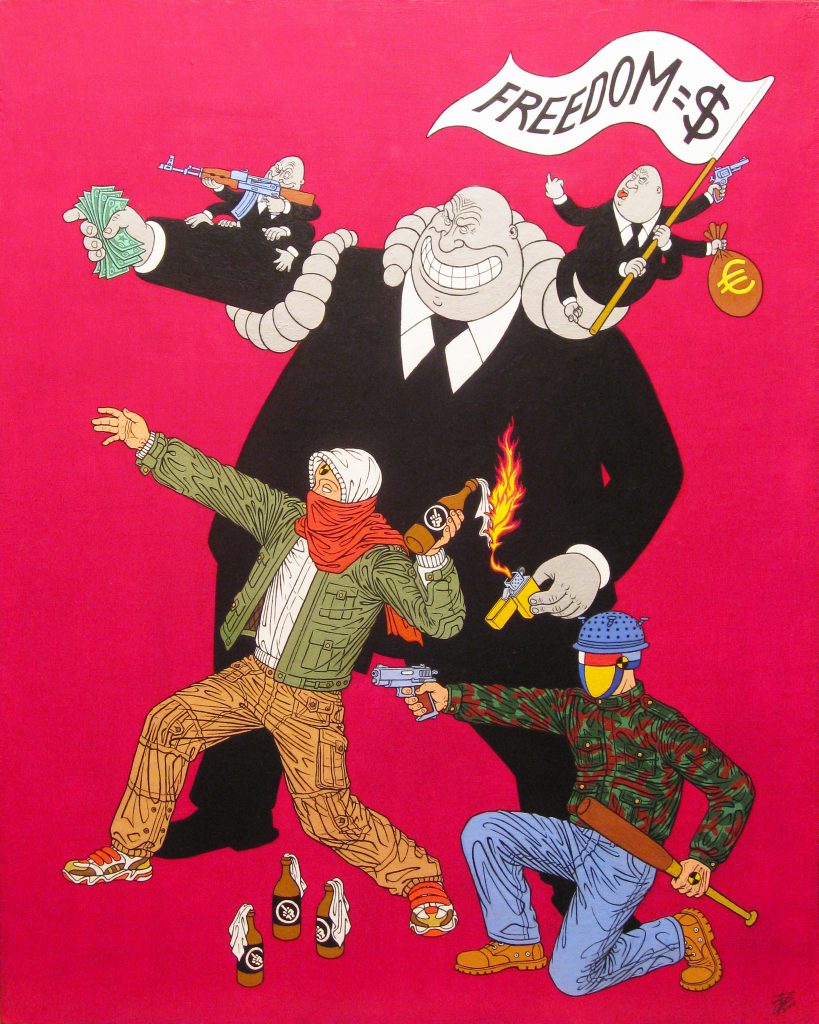 Rent a Coup by Aleksandar Todorovic. Image courtesy of the artist.

An open letter to an immigrant from a racist, previously published in 13th Floor Magazine.

Your parents slave away for you. They get excited at the bigger paycheck here. Sixteen pesos equals one dollar. What a huge gain. They don’t know that it’s futile. Their mediocrity is your mediocrity. Their leap for opportunity destroyed all of yours.
You come from a land of strife. A land that is broken and ruled by fear — dead men, women, and children hang from bridges and streetlamps. Gunshots are heard outside houses and people get beheaded for sport. Drug lords and their fiends come by and ask for payment for “protection”. They gun you down should you refuse. And what about the police? Forget it, they’re paid off. Your country’s soldiers are no better than those men either. They seize the innocent at random checkpoints in public. They remove them from their cars and slam them on the unforgiving pavement, breaking teeth and faces. They point their assault rifles down and scream. They violate your rights, but you dare not report them. They’ll murder you, and how could you even report them — if you were stupid enough to try? Corruption runs rampant and the soldiers wear masks of black, leaving their faces bereft of all emotion, a sinister evil lurking beneath. And so what do you do? Or rather, what do your parents, your guardians do? You’re a child — incapable of even a semblance of complex thinking. They grab you and pack their belongings quickly and they flee. They flee to another land… but don’t hold your breath. The storm isn’t over.

“Work hard in school!” they say. “Give it your best!” they say. They give you a stern look and tell you that education leads to a successful future. Ha — what liars, what deceivers, what fools. Their starry hopes for you are nothing, not in the face of reality. They screw you from the start and they know it, however good their intentions are. You have no future, it is destroyed the moment you leave your home country, the moment you are dragged across a patch of land. Why? Because they drag you here and turn you into a criminal. You don’t have any say — any choice — how can you? A mere child. But don’t put on your innocent face! No one cares. You’re a swine.

Your parents slave away for you. They get excited at the bigger paycheck here. Sixteen pesos equals one dollar. What a huge gain. They don’t know that it’s futile. Their mediocrity is your mediocrity. Their leap for opportunity destroyed all of yours. Yet despite this, you do everything they ask. You are intelligent. You are talented, even gifted. You have drive, fire, and passion. You’ve done everything close to perfection — a top student. Teachers praise your work ethic and say you will go far. And you, like a fool, get caught up in their words and start living a delusion. You are patriotic, you are strong, you are an athlete. You score high, colleges seek you, people are proud of you. You have everything! You have done your part, you followed orders. But despite all your accomplishments, you utterly failed. Why? Because you were screwed the moment you were brought into a country illegally as a child.

You see your friends, your peers, and many others alongside you begin to rise in the world. You are just as talented as they, if not more, but it doesn’t matter. You can’t rise with them. You become nobody. Nothing. Why? Because as an illegal you can’t enroll in a university. As an illegal you can’t be hired anywhere, not even at McDonald’s. If you fall into poverty, that’s too bad, you can’t get welfare. Who are you to get it? You’re an alien. You don’t belong here. You don’t exist in the government’s books. And pray incessantly, little illegal, that you never get an injury, for the price will be too high to pay. You have no medical insurance. You can’t have any. Wetback.

They call you a rapist and a murderer. A thief and a swine. The very name of the place you come from is uttered with such hatred and disgust, it becomes derogatory. To be associated with your birth country becomes an insult, and stings like a slap to the face. Why? Because they don’t have a shred of compassion and they believe anything they’re told. They are gullible, most of them, and they view you as an enemy. Everyone’s woes are blamed upon you — the vagrant who takes away their jobs, though you can’t even get one. And even if you’re lucky enough to get one, it’s not something one of the born-privileged would ever soil their hands with.

They blame their incompetence on you. They blame their insecurities on you. They blame a murder, not on the murderer, but on an entire country — on you. They hate you. But that’s not the worst part. The gut-wrencher in this fiasco is that you love them. You love the place you were brought to. You love their language, their customs, their traditions. You love their culture, their mannerisms, their livelihood. This is all you know, this is your home… in your heart. For it will never be that in the real, cold world. Remember that, illegal cur. Keep your head low, swine, or you’ll be tossed back from whence you came.

Perhaps it would’ve been better if you’d been left behind in your homeland. At least there you were an equal to those alongside you, if you didn’t get killed first. There you had a shot.  In this place you call home, you have nothing. So take your little hopes, dreams, and pathetic prayers, alien. Crumple them up and throw them away. They hold no place here; they have no sway here. Sink into this country’s hate and bask in it. There’s your damn future — you’ve found it.

Juan Zapata is a student at Alabama A&M University on a full scholarship. He currently studies Criminal Justice and endeavours to join a federal agency in the future. When he is not writing, he dreams incessantly of becoming a Jedi. Help Juan build a Twitter empire: @ZapataThe1.

Fear of the new and unexplored take center stage in this essay by Senior Film Critic Rhea Cinna on Andrei Tarkovsky’s Stalker.

A Critical Analysis of Misbegotten Love

"F transmits unbound electrons with her eyelids, playful,/ to the tune of the attraction of opposites..." Weekend poem, by Elosham...