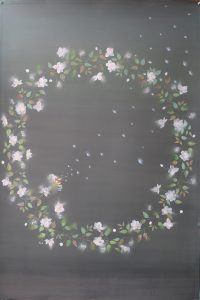 It was winter in the forest. The early year flurry had come down, and the snowfinchs that teetered on the frozen branches were whistling a winter song. The forests’ verdant energies were immersed in the snow, as were the mountains that stood quietly in the distance, which were glazed in white, and always were, but thicker than it would have been in warmer springs. Emerging from a congregation of oaks: Walter—blonde, not tall, and a conspicuous limp, the aftermath of some terrible tragedy. He looked dazed as though considering his existence, and even as he dragged his injured foot across the snow—the blood that seeped from the cut on his ankle forming stained contours on the pristine snow—he had on him the look that all men have when they are aware that the order of things have shifted, that levitation is after all shamelessly human and that spatial forces are an interdiction to flight. Walter continued to trudge till he was gasping for breath and stopped at the trunk of a tree to rest, sliding his back down the tree till he sat in the snow, the bitter winds biting into his skin so that he shivered. When you are marooned in the forest, you are in obeisance to its powers.

The airplane reminded Walter of those rusty submarines he saw at Havana—sinuous features and lacking contemporariness. He wondered, as he ascended the air stairs, why one thing, so unrelated, reminded him of the other.

A plane. A submarine.

The pilots’ voice over the speakers came in an affected accent that testified to his South American origins and as in a moment of prescience the old man who sat beside Walter said to him “Bloody Columbians, they’ll get drunk on booze and kill us all.”

Inside the plane, Walter sat next to an old man who wore an old looking cashmere sweater and had an impeccable knowledge of Indian literature and vernacular. The man said he was a professor in Caribbean arts and his wife was long dead, to which Walter offered his sincere condolences. Walter read from his phone and didn’t look up till he heard the hushed gasps of surprise that seethed from the passengers as two actors who were meant to be famous entered the plane. The commuters—astonished at how ordinary they looked in the physical and how perfect they were in that ordinariness. Walter recognised one of them from the acrylic frame that hung in his daughter’s room, the picture in it, frayed at the edges. The wood chipped at the ramin borders.

He—the actor: smiling out of the photograph, light stubble, not looking like a dead man.

She—his daughter: smiling back at the photograph, fantasizing sexual conquest with him.

The plane levitated off the ground and soon the world below was a connection of smaller forms. The air hostesses had on skimpy skirts and bright red lipstick, welcomed the passengers on board and wished them a safe flight, all the while smiling too widely. Smiles that seemed to Walter both insincere and fawning. The pilot’s voice over the speakers came in an affected accent that testified to his South American origins, and as in a moment of prescience the old man who sat beside Walter said to him, “Bloody Columbians, they’ll get drunk on booze and kill us all.”

And Walter—who had never glorified racism, nor denounced it entirely—threw back his head and laughed. Not more than an hour later, the plane, altered in its linear course, tilted itself, racing to meet the earth below. The passengers swayed to the force of the movement as they grappled to hold onto anything they found: the seats, a loved one. Above the sound of the screams of adults and children and the prayers of contrition that escaped the lips of some, Walter looked towards the horizon, hurtling into its fullness, the brilliant vista, now panning, zooming towards its original dimension. And as he leaned forward—his hands to his head, elbows against his thighs, assuming the bracing position—he felt a deep dissatisfaction with himself, that something somewhere was incomplete and unfinished.

Adeoye AmurawaiyefictionStory of the Week

"As both a woman and someone who has struggled as an LGBTQ individual, I can easily discuss concerns that arise...