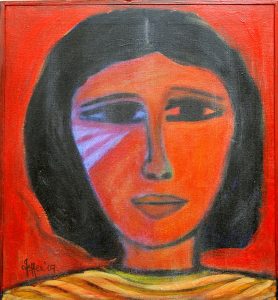 Stark white, the wall in front of her, in glaring antithesis to the colors she feels inside of her: the bleeding purple knot of worry deep in her gut, the feverish orange rhythm of her heart, the angry turquoise throb in her head.

She hears the drag of his footsteps on the linoleum long before the door opens. He tries to keep his feelings masked – trapped in a gilded cage of impassivity – but she senses the unease in his tread, like a deer senses danger. The unease not at what her results might say, but the amount of time she would waste weeping and blabbering.

He clears his throat before lowering himself into the chair

‘I’m afraid I have some bad news,’ he says. ‘Very bad news, indeed. Metastasis of the liver and brain along with other organs. Very poor response to the surgery you had almost a year ago. I don’t understand why you refused chemotherapy. You are quite possibly well beyond Stage four …’

She stops listening, her mind – her diseased and dying mind – shifting away from the hospital, the cold hard chair and depressing walls, the doctor’s red face, so healthy that she wants to reach out and squeeze it just to see what vitality feels like. She goes nowhere at first. She might have taken a trip into space; she sees planets and stars, the sun shining bright in her eyes. The thoughts clot into a nucleus, then grow like a developing fetus before getting torn apart. She stares, but doesn’t understand. She sees her living room, her husband with his feet on the coffee table, his eyes closed. She wants to reprimand him, but the words won’t form. Her eyes travel to her son’s room, and she sees his clothes scattered everywhere, forming a second carpet. Oh, Munir! She pictures the room after she is gone… would there be a third carpet, then a fourth? Will Munir just keep piling the clothes until his head bumps into the ceiling when he walks into the room? Would the mess remind him of her, of how she always made it spotless at the end of the day no matter how much he toiled to the contrary? For a moment, just one selfish moment, she relishes the messy room.

‘… not asking you to lose hope, but at this point, trying anything might just cause collateral damage to the body. Speed your disease so to say, but there are clinical trials that I’ve heard of –’

She spreads her hands on the cold glass-topped table. ‘How long until I die?’

Of everything she could have achieved in life, she would die a housewife. A nonentity. Like a vase on the mantelpiece. One minute there, and gone the next. Cleared away… replaced with one that has a more pleasing pattern.

The doctor sits with his hands clasped on his desk, his cheeks a rosy red, the pudgy thumbs knocking against each other – the picture of health.

She laughs, not a bleak self-pitying laugh, but a strong harsh one, the laugh of villains. ‘Your luck has nothing to do with it, doctor.’ And then at the same moment, involuntarily, she apologizes. Her husband’s kindness exerting itself in her words yet again.

The doctor is taken aback. He lifts the lid off a glass of water, and drinks deeply, draining the glass. Savoring it, most probably. Reminding her of the small pleasures of life that will be denied to her in a few months.

She leaps off her chair as if scalded. ‘Thank you, doctor.’

‘But,’ the doctor protests. ‘We haven’t even discussed the clinical trials.’

‘Thank you, doctor,’ she repeats. All of a sudden, words seem unnecessary, taxing even.

She drives herself, even though the cramps in her stomach are so bad that she nearly crashes into the trees. How ironic, she thinks, to die while you’re dying. The thought makes her smirk. That’s the best she can do. She doesn’t think she will ever laugh again. She almost regrets not taking her husband up on his offer to accompany her to the doctor’s.

Of everything she could have achieved in life, she would die a housewife. A nonentity. Like a vase on the mantelpiece. One minute there, and gone the next. Cleared away… replaced with one that has a more pleasing pattern. Already she notices the misgiving with which her husband rises out of bed to run cold water over a towel and bring it back to her so that she can hold it over her clammy body, her burning stomach. Her body that didn’t even have the dignity to give her a warning before preparing to shut down. She could have done more. She could have traveled the world. She could have – she could have. That’s all her remaining time would be like. She could have…

She sees women doing laundry on the banks of the Canal she drives past. They’re elbows deep into frothy buckets, their wet shirts clinging to their buxom bosoms, every scrubbing motion jiggling them like a trembling pudding. She slows her car. It’s hard to look anywhere but at those delightful breasts, so full of life, so cheerful. Yes, it was after hers were chopped off that she discovered that breasts brought happiness. She never knew what that happiness was until it got robbed from her. A thin scalpel, her diseased flesh, and two hours later, she was lying in a hospital room with a flat chest and a gaping hole where that happiness used to be.

She notices the sour look on her husband’s face when his gaze lands on her chest. And to think she had had breasts to envy. He flashes her a confident grin, but she senses his distaste, and in bed, his revulsion. So much that they’ve been celibate ever since. At least she has. She’s certain that he’s been smothering his face into other warm, inviting breasts, a brief respite from the stony figure of his wife, her stoic, vulture-like face that seems to only grow thinner by the day. She doesn’t resent him that.

Awais KhanfictionStory of the Week

"Travelling back and forth is a privilege, but I’ve developed a sort of chronic homesickness. So I use writing about...